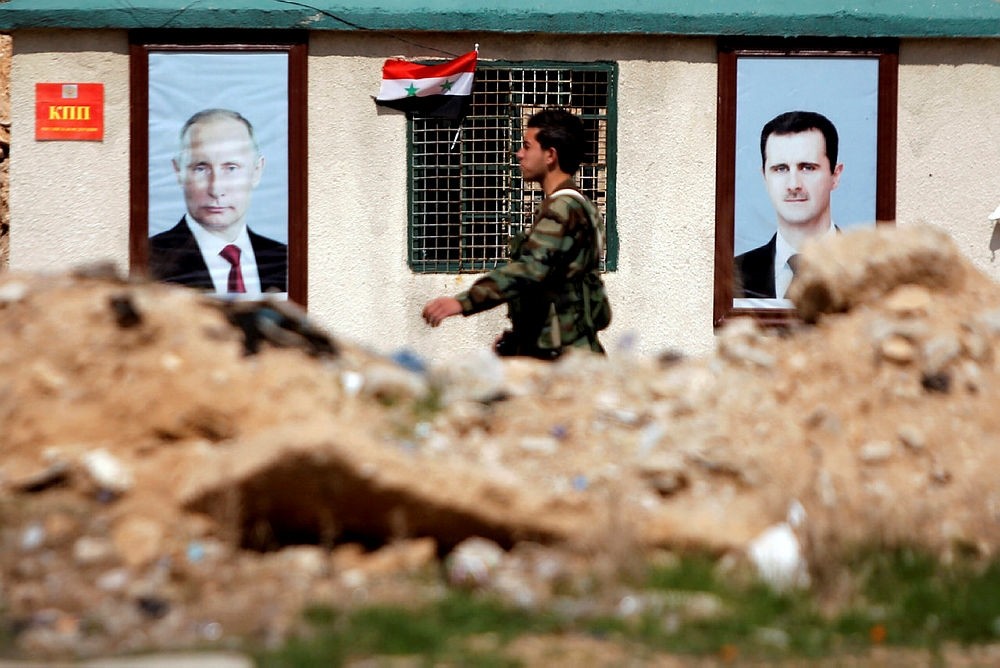 A Syrian soldier loyal to Bashar Assad is seen outside eastern Ghouta, in Damascus, Syria February 28, 2018. (REUTERS Photo)
by Compiled from Wire Services Apr 12, 2018 12:00 am

"The raised state flag over a building in the town of Douma has heralded the control over this location and therefore over the whole of eastern Ghouta," Major-General Yuri Yevtushenko, head of the Russian peace and reconciliation center in Syria, was quoted as saying.

"They are the guarantors of law and order in the town," the ministry was quoted as saying.

However, there was no official announcement by Damascus, and no indication that Syrian regime forces had entered the town.

Douma and the enclave of eastern Ghouta, just east of Damascus, was a significant opposition stronghold during Syria's civil war, now in its eighth year. Its effective surrender to regime forces comes after years of siege by Assad's troops and a months-long, intense military offensive.

Meanwhile, Syrians are bracing for a possible U.S. attack in retaliation for Saturday's alleged chemical assault in Douma. The Foreign Ministry in Damascus has denounced President Donald Trump's threat to attack the country as "reckless" and a danger to international peace and security.

Under an evacuation deal for eastern Ghouta that was mediated by Russia, Assad's top ally, no Syrian regime troops are expected to enter Douma, only police. Another police force, incorporating former opposition forces, is also to be formed and deployed in Douma.

Evacuation of armed gunmen and civilians who refuse the deal is still underway. According to the Syrian Observatory for Human Rights, which monitors the war through activists on the ground, there were still opposition fighters inside Douma on Thursday.

The Russian ministry said the situation in Douma was "normalizing." The Observatory said the Russian military is deploying to reassure thousands of remaining civilians in Douma.

Amid earlier disagreements, a truce collapsed last week and the Assad regime pressed ahead with its offensive.

The evacuation deal called for the formation of a local council to administer Douma. Thousands of civilians are staying in Douma, and some fighters are also expected to stay, on condition that they hand in their weapons. More than 13,500 Syrian rebel fighters and their families left Douma this month.