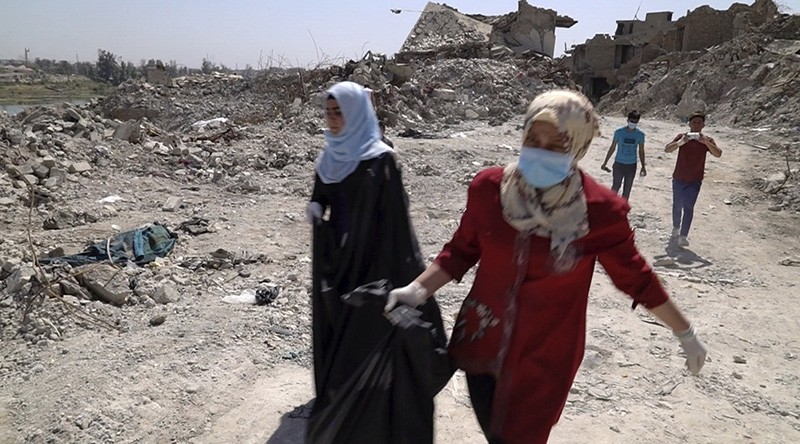 Authorities in Mosul have buried more than 1,000 bodies in a mass grave in a desert valley outside the city, most of them believed to be Daesh terrorists, according to a provincial official. More remains are being dug out of the rubble of the district where the fighters made their final stand last year.

Hundreds more bodies are still strewn across or buried in Maydan district nine months after it was flattened in the final battles to retake Mosul, creating one of the grimmest scenes from a brutal war that was compared to the worst urban combat of World War II.

During a recent visit by The Associated Press, pieces of desiccated bodies, often in shreds of fighters' uniforms, were visible scattered in the ruins, which are also laced with unexploded bombs and unused suicide belts. In one place, the crown of a skull stuck out of the dirt, brilliant white with a fringe of leathery scalp and hair. One man lay crushed under the wreck of a car, his legs sticking up in the air.

Most of the bodies appeared to belong to Daesh fighters killed by airstrikes or shelling, their remains half-buried. But there were also women and small children. The body of baby girl, turned ghoulish brown, lay on the balcony of a half-collapsed building, covered by bits of rubble.

The scene is testimony to Iraqi authorities' lack of resources and the overwhelming task they face in just digging out from the destruction wreaked across Mosul in the nine-month offensive by Iraqi forces backed by the U.S.-led coalition that finally defeated Daesh here. Multiple neighborhoods suffered heavy damage. Clearing of rubble is largely financed by the United Nations' development agency, and repairs are proceeding slowly. In some areas, streets have been cleared but many buildings remain shattered.

Faris Abdulrazzaq, mayor of Maydan, said the failure to clear the area — not just the bodies, but also the huge amount of unexploded ordnance — was preventing residents from returning to rebuild what they can, as others have in other districts.

"Even when you pass by a dead cat, you feel the smell and you try to get rid of it. How do you think hundreds of dead bodies smell?" he said. "I wonder why all these government officials are leaving this problem to fester all this time. This is the first thing they should take care of."

He expressed fears over the health impact of the bodies. The World Health Organization has often noted that even large numbers of bodies left after a disaster do not pose a major health risk, since the victims die of trauma not epidemic and bacteria involved in decomposition are not dangerous.

But the stench of decay rising from the ruins is oppressive, and temperatures are only now starting to rise into the upper 20s Celsius (80s Fahrenheit).

Even by the awful standards of Mosul, the devastation is shocking in this part of the Old City stretching roughly a kilometer (half mile) along the Tigris River. The piles of dirt, rubble, smashed concrete, metal and vehicle skeletons are so high it is barely possible in many places to tell where the street ended and the buildings once began.

Iraqi and U.S.-led coalition forces dropped vast amounts of explosives on this small area to break Daesh fighters' resistance last July in the last weeks of the nine-month-long assault that free Mosul from the militant group's rule. The fighters held out the longest in Maydan, a neighborhood of tiny, winding alleyways and closely built homes.

Bashar al-Kiki, the head of the provincial council for Nineveh governorate, told the AP on Thursday that the municipal government had no resources to clean up the site. The bodies are collected by civilian volunteers, then taken by the municipality to the city morgue and finally to a mass burial site in a desert valley near Sahaji, a town west of Mosul, he said.

He estimated that 1,000 bodies had been buried at the site.

Al-Kiki said the morgue makes an effort to identify the bodies or at least to tell if they belonged to fighters or civilians, but lack of resources prevents them from carrying out a proper identification process.

This week, a band of young volunteers wearing plastic gloves worked amid the rubble, pulling corpses cut in half out from under piles of bricks and putting them into white body bags. Some said that occasionally during their work in the past months they've been harassed by security forces asking why they are bothering to deal with Daesh bodies.

The leader of the team, 23-year-old Surur Abdulkarim, said that in the past six months they had collected 650 bodies. She said the aim was to clear out as many as possible before the heat of summer.

She said their operation was entirely self-financed except for a one-off donation of some body bags and protective clothing by the aid group Medicines Sans Frontieres. Several times a week they turn up at the site with a few bags, fill them with corpses, and then leave them by the roadside for the municipality to pick up.

Iraqi and U.S. officials have never given a detailed estimate of how many Daesh militants were killed in Mosul, only putting the figure in the thousands. Thousands more escaped and continued to fight elsewhere in Iraq or in Syria.

An AP investigation last year found that between 9,000 and 11,000 civilians died in the battle to retake Mosul from the Daesh terror group, at least a third of them killed by Iraqi or coalition bombardment.

The extremists had controlled the city, Iraq's second largest, since June 2014, when they declared their "caliphate" over a third of Iraq and Syria. Nearly all of that territory has been wrested back in the campaign led by U.S.-backed Iraqi and Syrian forces, except for small pockets held by Daesh in Syria.