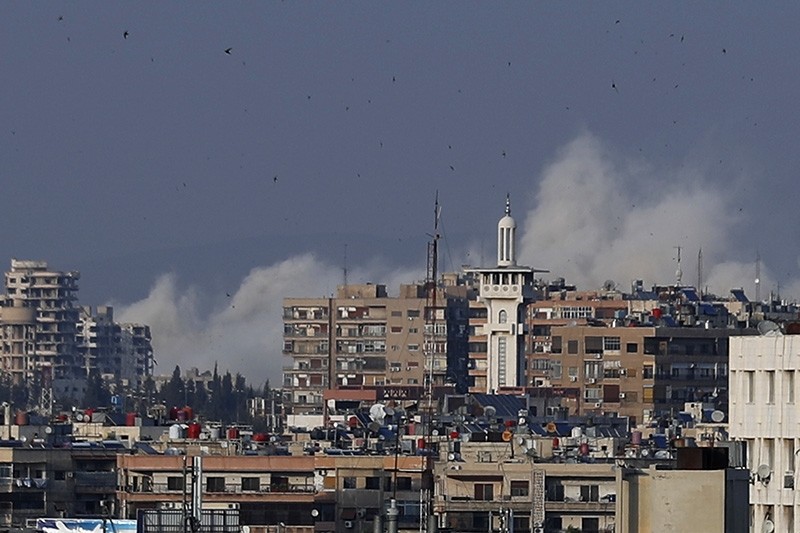 White smoke rises after the regime army destroyed a tunnel previously used by opposition fighters in the town of Harasta, in eastern Ghouta region east of Damascus, Syria, Saturday, April 14, 2018. (AP Photo)
by Compiled from Wire Services Apr 14, 2018 12:00 am

The Assad regime's army command on Saturday announced that the all opposition left eastern Ghouta region, following the departure of the last fighters from the city of Douma towards the north of the country, regime media reported.

"All the terrorists have left Douma city, their last bastion in eastern Ghouta," the statement said, referring to the opposition fighters as terrorists.

The announcement comes after a massive assault launched by the Assad regime and allied forces on February 18 to retake the enclave, which has been out of regime control since 2012.

According to UK-based Syrian Observatory for Human Rights, at least 1,700 civilians have been killed in bombardment on the enclave in just under two months.

Douma is the main town in what at the start of the year was a sprawling semi-rural area just east of Damascus, home to almost 400,000 inhabitants.

The regime has been accused of carrying out a deadly chemical weapons attack last week on Douma, the final part of the enclave where rebels were balking at a Russian-brokered deal to evacuate them to northern Syria.