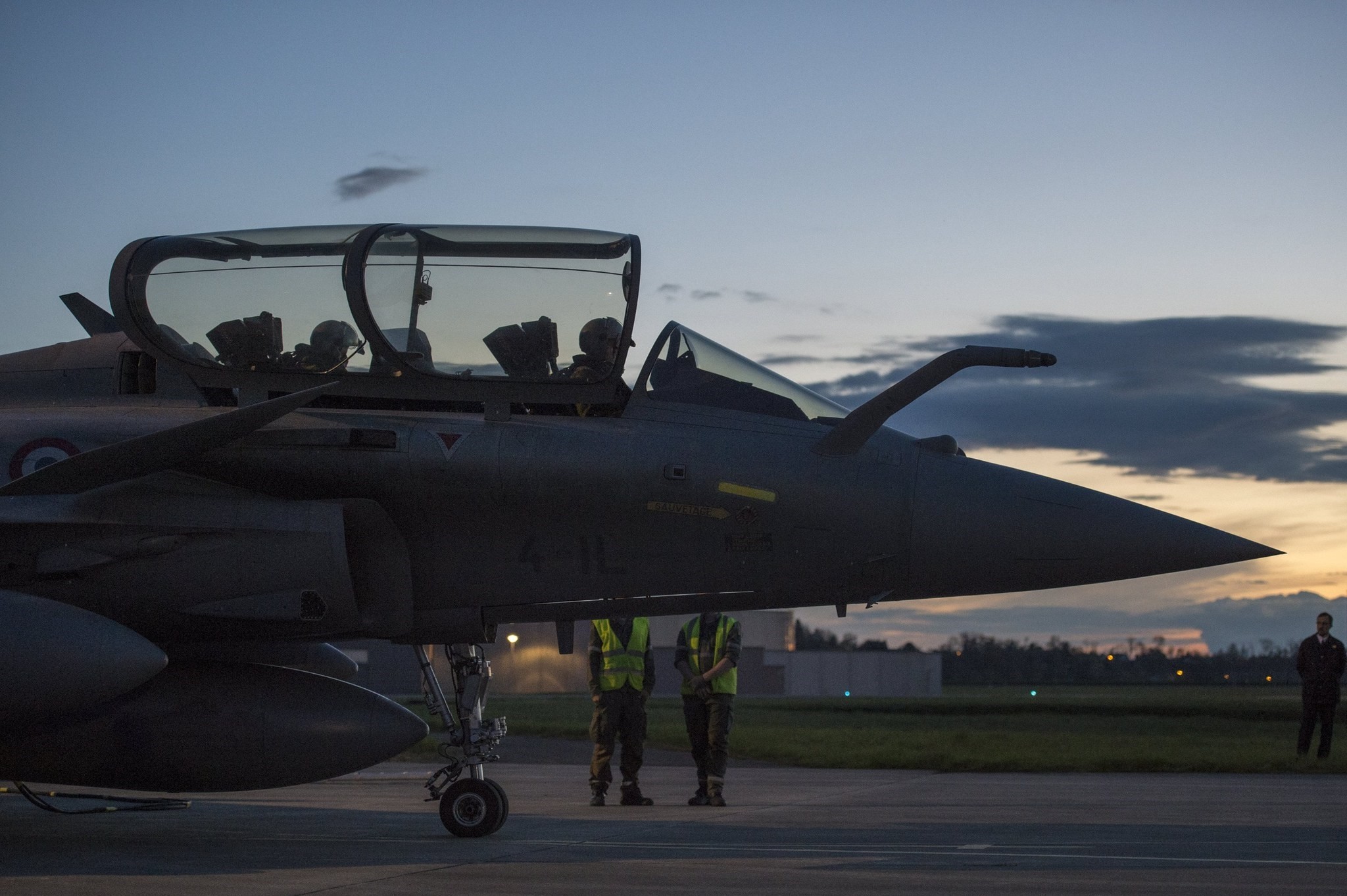 Photo made available by the French Defence audiovisual communication and production unit (ECPAD) shows Rafale warplanes preparing for take off at the Saint-Dizier aerial military base, eastern France, late 13 April 2018.
by Daily Sabah with Agencies Apr 14, 2018 12:00 am

Saudi Arabia, a key regional ally of the West, has expressed "full" backing for the US-led strikes against Syria and other U.S. allies Jordan and Egypt called for a political solution while Iraq warned the move could give terrorism an opportunity to expand in the region.

Mixed reactions came from the Middle Eastern countries following an overnight attack on the Assad regime by the U.S., British and French forces.

Saudi foreign ministry blamed the government of Syrian regime leader Bashar al-Assad for the necessity of the strikes and said in a statement that the military operations came in response to "the Syrian regime's continued use of internationally prohibited chemical weapons against innocent civilians."

In a statement, the ministry reiterated support for all international efforts aimed at reaching a political solution "that fulfills the legitimate aspirations of the Syrian people and maintains the country's territorial integrity".

"A year ago I gave Israel's total support for (U.S.) President Donald Trump's decision to mobilize against the use of chemical weapons," he said, referring to American strikes against the Syrian regime in April 2017 after a sarin gas attack on an opposition-held town.

The Gulf state of Bahrain also said it fully supports the airstrikes against chemical and military sites in Syria.

In a statement, the Bahrain Foreign Ministry said the attacks were "necessary to protect civilians in all Syrian territory and prevent the use of banned weapons".

Jordanian government spokesperson Mohammad al-Momani said in a statement: "Continued violence will only lead to more violence, conflict, fighting and displacement whose victim is the Syrian people," without referring to the dawn air strikes.

Also not specifically mentioning Saturday's missile strikes, Egypt's foreign ministry said it was deeply concerned "at the current military escalation in Syria". It also rejected the use of internationally banned weapons on Syrian territory and demanded a transparent international investigation.

"The Arab Republic of Egypt expresses its solidarity with the brotherly Syrian people in their aspirations to live in security and stability," the ministry said in a statement.

Meanwhile, Iraqi foreign ministry, holding a position is in line with those of Russia and Iran, said the air strikes marked "a very dangerous development."

"Such action could have dangerous consequences, threatening the security and stability of the region and giving terrorism another opportunity to expand after it was ousted from Iraq and forced into Syria to retreat to a large extent," it said.

The ministry called on Arab leaders to discuss the situation at a summit due to be held in Saudi Arabia on Sunday.

Shiite-led Iraq has kept good relations with Assad's government and Iran, while also receiving massive military and financial support from the United States, Britain and France. A U.S-led military coalition provided key air and ground support to the Iraqi government forces last year to recapture Mosul and other cities seized by Daesh in 2014.

Iraqi Prime Minister Haider al-Abadi last month said he wants "to keep away" from the conflict between the United States and Iran.

Lebanon, another neighbor of Syria, was outright in rejecting the strikes. "Lebanon refuses any foreign aggression targeting any Arab country, regardless of the cited reasons," Lebanese President Michel Aoun said in a statement.

Lebanon has felt the spillover from the Syrian civil war. The country hosts some 1.5 million Syrians displaced by more than seven years of war in their homeland.

Kuwait, for is part, regretted what it described as "dangerous escalation" in Syria.

A Foreign Ministry source said the attacks were the result of the failure of the U.N. Security Council to reach a political solution to the 7-year conflict, according to the official KUNA news agency.

The United States, France and Britain have accused Assad of attacking the Damascus suburb of Douma with chemical agents on April 7. They say the air strikes on Saturday had been aimed at deterring his further use of chemical weapons.