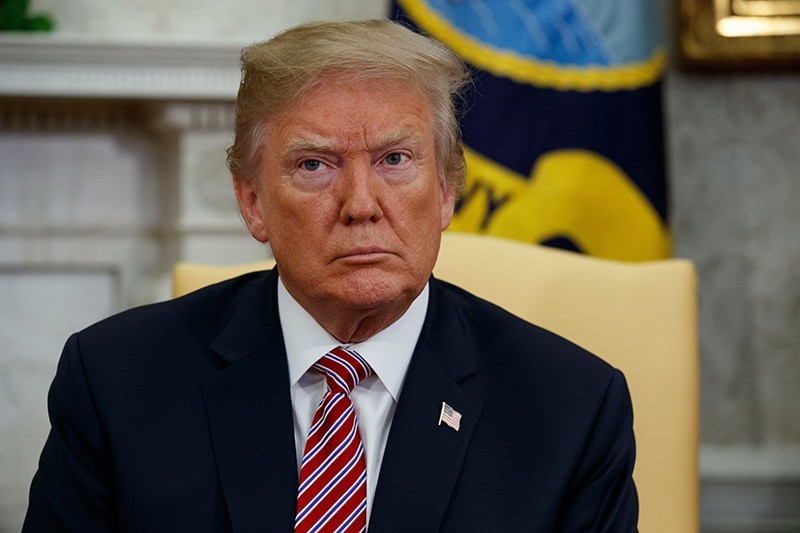 U.S. President Donald Trump is pushing his military advisors to agree on a larger military action against the regime of Bashar Assad in response to April 7 chemical attack in the Syrian town of Douma, sources said Friday.

One senior official said Trump has asked his military to consider options that would include punishing Russia and Iran — Assad's main backers — in part over his growing level of exasperation with Russian President Vladimir Putin.

However, said two other officials, Defense Secretary Jim Mattis and other military leaders have warned that the larger the attack, the greater the risk of a confrontation with Russia.

According to the Wall Street Journal, U.S. twice canceled strikes against the Assad regime as Mattis wanted them to be more limited.

"[Trump] wants Mattis to push the limits a little bit more," an official told the WSJ.

When Assad forces launched a chemical weapons attack against civilian targets last year, Trump was horrified by the deaths of "beautiful little babies" and quickly ordered a missile strike against a regime airfield, although he listened to top military advisers and decided to minimize Russian and other casualties.

A year later, Trump finds himself again weighing his response to a suspected poison gas attack by Assad's forces, this time in the town of Douma last weekend.

He is troubled by the similarly gruesome pictures of suffocating children, but his tougher stance this time is driven in part by his hardened view of Putin and his belief that Assad did not learn a lesson from the first strike, officials said.

"Just deterring this act with a few airstrikes and not looking at the consequences for Syria wouldn't be a fully fleshed-out action," said another senior administration official.

It was unclear what the approach might mean for Russian and Iranian forces in Syria. An attack on them could raise the risk of a wider war in Syria at a time when Trump still wants to withdraw 2,000 U.S. troops there in a matter of months.

White House Press Secretary Sarah Sanders said on Friday that the Assad regime was responsible for the attack but added pointedly, "We also hold Russia responsible for their failure to stop chemical weapons attacks from taking place."

But relations have instead soured over mounting evidence of Russian meddling in the 2016 presidential election, Russia's alleged poisoning of a former double agent in the United Kingdom and Putin's support of the Assad regime in Syria.

"Eventually, he got exasperated," said a source familiar with the internal debate at the White House.

Russia's denial that the Assad regime was responsible for the chemical weapons attack, further angered Trump, one of the U.S. officials said. After months of criticism that Trump was being soft on Putin, the U.S. president pulled no punches with a tweet on Sunday: "President Putin, Russia and Iran are responsible for backing Animal Assad."

Another senior official said Trump and his aides had largely settled on a consensus view on what strategy to take and that work continued on the timing and coordination with allies who plan to participate.

"The president has a dilemma," said this official. "On the one hand, not hitting Assad harder would be a sign of weakness."

But, the official added, Trump believes that in order to be able to negotiate successfully with Putin, it is essential that he demonstrate he is willing to take a harder line in Syria.

The Syria crisis has come as a test for not only Trump, but incoming National Security Adviser John Bolton, a hawk who joined Trump's team this week.

Bolton has called the Syrian civil war a "sideshow" and said he is much more concerned about Iran's role there than about whether Assad remains in power.

In a speech last month, he publicly called Russian interference in the 2016 U.S. election "an attack on the American Constitution", and said the U.S. should respond to it very disproportionately "in cyberspace and elsewhere."

A source familiar with the discussions about Syria said that despite his hawkish views on Russia, Bolton has not used his first days in office to push hard for a more extensive air campaign against targets in Syria.

In his first days in his job, Bolton has quickly assumed the role of "quarterbacking" the policy part of Syria strategy. Another official said Bolton did not advocate for any particular position beyond agreeing that the U.S. should retaliate for the attack if it was clear what chemicals had been used and who used them.

Otherwise, he played the traditional role of a national security adviser, making sure participants were able to offer their opinions, this official said.

Bolton and the other participants were surprised when Vice President Mike Pence showed up unannounced and took over a Principals' Committee meeting on Syria on Monday afternoon.

Pence's aim, he told another White House official, was not to overshadow or undercut Bolton on his first day at work, but to "provide some continuity at a time when we have some changes and a lot on our plate."

Nevertheless, some national security aides took Pence's unexpected appearance as an indication that he feels a needs to provide a steadying influence as Bolton takes the helm and White House Chief of Staff John Kelly has been marginalized to some extent.

John Hannah, senior counselor at the Foundation for Defense of Democracies, who has worked with Bolton in the past, said Bolton was opposed to "empty symbolic gestures that make us feel good but have no strategic effects."

"If possible, he'll want to do serious damage to Assad's ability to carry out these kinds of heinous attacks," Hannah said. "But beyond simply destroying hardware, he'll want to get deep inside the head of Assad and his Russian and Iranian backers."