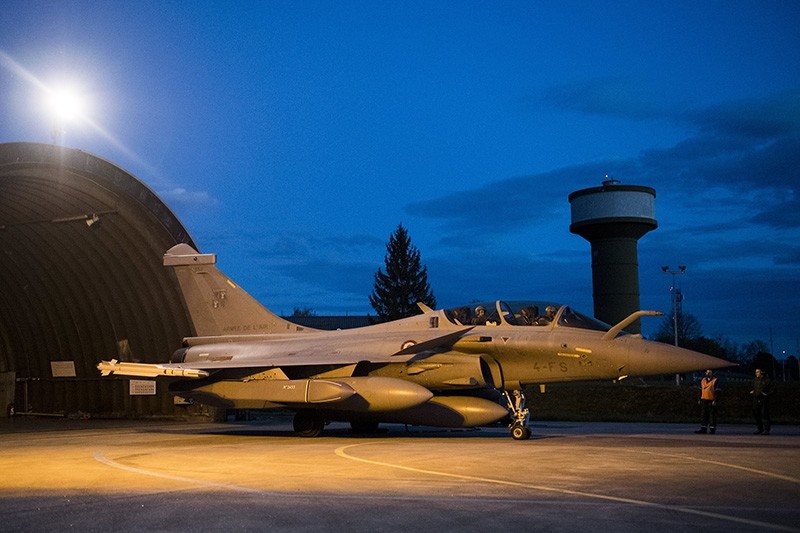 A handout photo made available by the French defense audiovisual communication and production unit (ECPAD) shows Rafale warplanes preparing for take off at the Saint-Dizier aerial military base, eastern France, late April 13, 2018. (EPA Photo)
by Daily Sabah Apr 14, 2018 12:00 am

Turkey was informed of the forthcoming strikes fired by the U.S. and its allies against Syrian regime targets on early Saturday, the ruling Justice and Development Party (AK Party) Spokesperson Mahir Ünal said.

Speaking in a televised interview on CNN Türk on Saturday, Ünal said there was a sharing of information between Turkey and U.S., U.K. and France before the operation, and that Turkey was already expecting such reaction following the statements coming from its allies.

"We see this attack as a sanction against the use of chemical weapons and a stern warning to Assad against attacking his own people with chemicals," he added.

Government spokesman and Deputy Prime Minister Bekir Bozdağ said the U.S. did not use the Incirlik air base located in southern Adana province in the attacks.

Earlier on Saturday, Turkish foreign ministry described the air strikes against the Syrian government as an "appropriate" response in a statement released on its website.

"Turkey believes that it is of critical importance that such crimes do not go unpunished and that accountability is ensured in order to prevent the recurrence of similar crimes," the statement said.

The first target was a scientific research center outside of Damascus and the second was a chemical weapons storage facility outside of Homs, he said.

The third target was near to the second and was a chemical weapons storage facility and an important command post, he said.