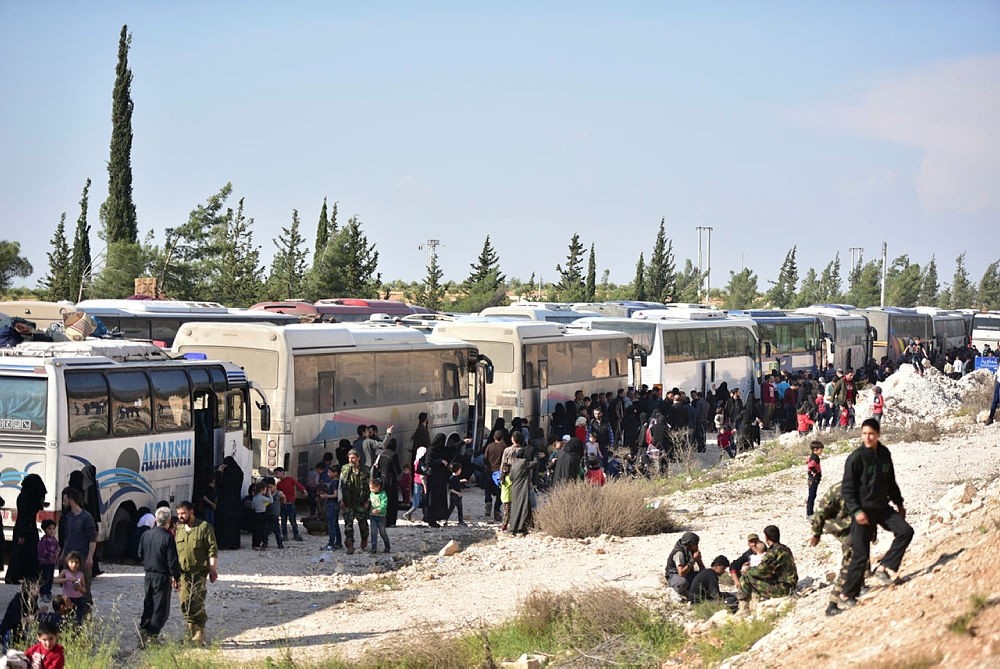 A 22nd convoy carrying civilians and opposition fighters from the city of Douma in the Damascus suburb of Eastern Ghouta arrived in Aleppo's Al-Bab district on Sunday, according to Anadolu Agency correspondents in the area.

The convoy of eight buses carried 145 people, including 55 children and 42 women, who will be brought to the Azaz district from Al-Bab where they will be provided with temporary accommodation in camps.

With the latest convoy, the number of people to have left Eastern Ghouta since the evacuation process began on March 22 has surpassed 60,000.

Evacuations from Douma are set to continue, according to Anadolu Agency correspondents based in the area.

The operation, which concluded in March of last year, largely succeeded in purging the Turkey-Syria border area of the terrorist presence.

Evacuations are being conducted as part of a Russian-brokered agreement between Syria's Assad regime and armed opposition groups.

On Feb. 24, the UN Security Council unanimously adopted Resolution 2401, which called for a cease-fire in Syria -- especially in Eastern Ghouta -- to allow the delivery of humanitarian aid.

Despite the resolution, however, the regime and its allies in early March launched a major ground offensive -- backed by Russia -- aimed at recapturing opposition-held parts of the district.

Since Feb. 19, more than 1,400 people have been killed in attacks by the regime and its allies in Eastern Ghouta, according to local civil-defense sources.

Home to 400,000 residents, Eastern Ghouta has remained under a crippling regime siege for the last five years, which has prevented the delivery of badly needed humanitarian supplies.

Syria has only just begun to emerge from a devastating conflict that began in early 2011 when the regime cracked down on demonstrators with unexpected ferocity.

According to UN officials, hundreds of thousands of people have been killed in the conflict and millions displaced.