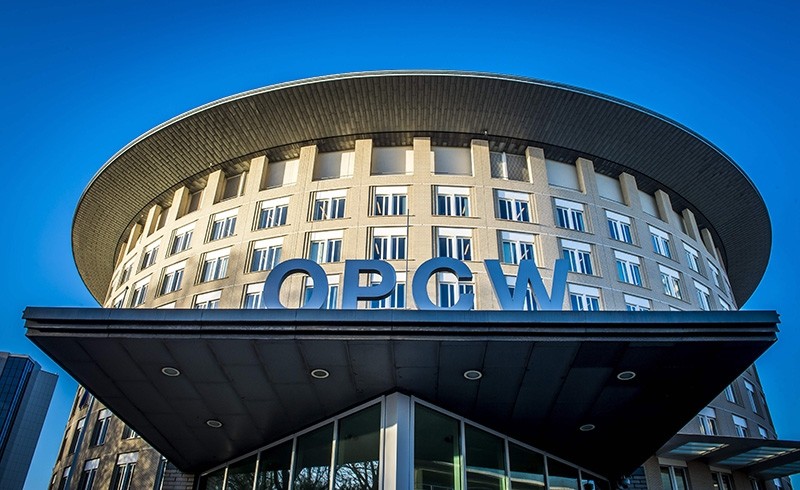 A file photo taken on November 15, 2013 shows an exterior view of the Organisation for the Prohibition of Chemical Weapons (OPCW) building in The Hague. (AFP Photo)
by Daily Sabah with Agencies Apr 16, 2018 12:00 am

The global chemical arms watchdog on Monday opened emergency talks on the suspected poison gas attack in the Syrian town of Douma.

The OPCW has 192 members, and Monday's closed-door governing executive council meeting of 41 states was called by its chairman, Bangladeshi ambassador Sheikh Mohammed Belal, "to discuss the alleged use of chemical weapons" in Syria.

An OPCW fact-finding team is also in Syria to probe the alleged attack on Douma in which 40 people died on April 7.

The British delegation to the OPCW tweeted that its group of experts had not yet been granted access to Douma.

The Kremlin, however, refuted the British claim.

"We called for an objective investigation. This was at the very beginning after this information [of the attack] appeared. Therefore allegations of this towards Russia are groundless," Kremlin spokesman Dmitry Peskov said.

More than 390 allegations of chemical weapon use in Syria have been recorded by the OPCW since 2014, the British envoy to the group said Monday.

"The Syrian regime has an abhorrent record of using chemical weapons against its own people," said Peter Wilson, adding that the use of chemical weapons "has become an all-too-regular weapon of war in the Syrian conflict."

"The experts have been in Syria for the past three days upon the request of the Syrian government and several meetings were held during which the cooperation between the two side was discussed," al-Mokdad was cited as saying by the state news agency SANA.

The French ambassador Monday urged countries to help boost the work of the OPCW so it could definitively dismantle Syria's "secret" toxic weapons program.

"The priority today is to give the technical secretariat the means to complete the dismantling of the Syrian program," Phillipe Lalliot told the meeting.

Following recent alleged attacks "we all know, Syria has maintained a secret chemical program since 2013," the ambassador added. That was a reference to the year when under international pressure Syria finally joined the OPCW and admitted to stockpiling toxic arms.

"The facts are there, and they defy the most obscene lies and the most absurd denials," Lalliot said, adding that Douma had joined others like "Ypres, Halabja, Ghouta and Khan Sheikhun in the terrifying litany of chemical massacres."

OPCW experts said in 2016 that all of Syria's declared stockpile of chemical weapons had been destroyed. But the organization's head Ahmet Üzümcü, a Turkish diplomat, has repeatedly warned of "gaps and inconsistencies" in Damascus's declaration.

Lalliot also voiced France's support for the work of the OPCW which has come under attack in recent days, notably over its findings relating to the poisoning of a former Russian double agent and his daughter in Britain.

"We have every confidence in the independent, impartial and professional work of its teams, even as they work in difficult and dangerous circumstances," he told the OPCW's governing executive council.

"Our priorities are clear. To guarantee the definitive destruction of all of Syria's secret chemical weapons arsenal; to fight against impunity and punish those responsible for the chemical attacks; and to put in place an impartial and independent mechanism to find out who is behind the attacks," Lalliot added.

The U.S. envoy to OPCW on Monday voiced concerns that Russia "may have tampered" with the Douma attack site in Syria. Kenneth Ward called on the OPCW to condemn Syria for its "reign of chemical terror."

He also said he expects increased use of banned toxic munitions by other states, following in the example set by Syria's Assad regime.