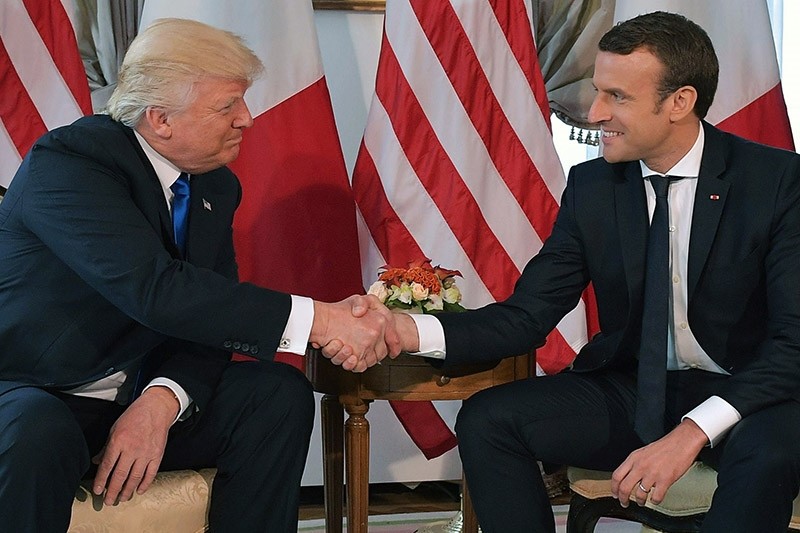 President Donald Trump still wants US troops to leave Syria, the White House said late Sunday, after his French counterpart Emmanuel Macron said he had persuaded Trump to keep them there.

"The U.S. mission has not changed - the president has been clear that he wants U.S. forces to come home as quickly as possible," spokeswoman Sarah Sanders said in a statement quoted by US media.

"We are determined to completely crush ISIS [Daesh] and create the conditions that will prevent its return," she continued. "In addition, we expect our regional allies and partners to take greater responsibility both militarily and financially for securing the region."

The comments came after Macron said that he had spoken to his U.S. counterpart Donald Trump about the importance of staying in Syria after Trump threatened to withdraw US troops.

"We convinced him that it is necessary to stay [in Syria]," Macron said during a televised interview on Sunday. He added that he had persuaded Trump to restrict Saturday's U.S.-led strikes to chemical weapons facilities.

Announcing the coordinated attacks on Syrian government targets, Trump had said, "America does not seek an indefinite presence in Syria, under no circumstances."

The Saturday strikes by U.S., Britain and France were launched in response to a suspected chemical attack near the capital Damascus on April 7, in which dozens of people died.

Syria and Russia have repeatedly denied that such an attack on the former rebel town of Douma took place.

Earlier on Sunday, U.S. Ambassador to the United Nations Nikki Haley said Washington would impose further sanctions against Russia as part of its response to the attack.

The new sanctions "will go directly to any sort of companies that were dealing with equipment related to Assad and chemical weapons use," Haley said on CBS.

France also proposed a comprehensive U.N. resolution that calls for a fresh start to resolving the conflict in Syria through diplomacy, with negotiations set to begin on Monday.

However, four other resolutions on Syria have failed since Wednesday alone, and it is unclear when a vote could take place.

The executive council of the Organization for the Prohibition of Chemical Weapons (OPCW) is also expected to hold a special meeting on Syria in the Hague on Monday. An OPCW team is currently in Syria investigating the gas attack.

Meanwhile, the Kremlin said Russian President Vladimir Putin had spoken to Iranian President Hassan Rouhani by telephone on Sunday, and that they agreed that the "illegal" U.S.-led strikes were "adversely impacting prospects for a political settlement in Syria."

Earlier in the day, al-Assad said the aggression by the U.S., Britain and France against Syria was coupled with a "campaign of misdirection and lies" at the U.N. Security Council against Syria and Russia.

"Syria and Russia are fighting a battle not only against terrorism, but also for protecting international law ... based on respect for state sovereignty and the will of their people," al-Assad was quoted by the official SANA news agency as saying at a meeting with members of Russia's ruling United Russia Party.