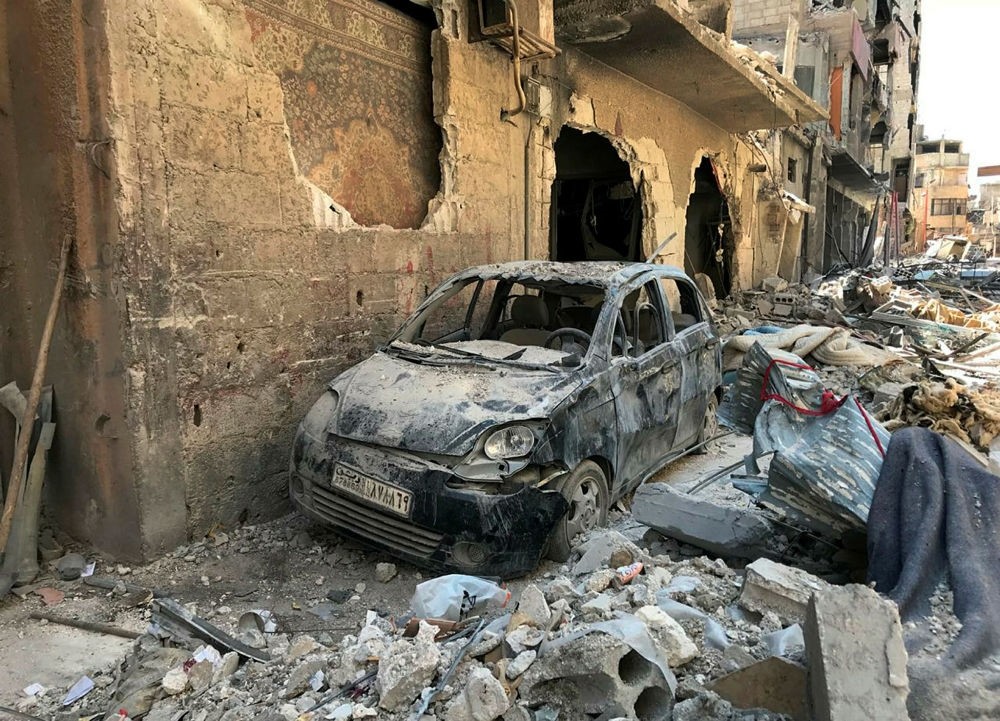 Rubble lines a street in Douma, the site of a suspected chemical weapons attack, near Damascus, Syria, April 16.
by Compiled from Wire Services Apr 17, 2018 12:00 am

Following joint weekend airstrikes by the U.S., U.K. and France on reported Assad regime chemical weapons facilities in Syria, the OPCW reported more than 390 allegations of chemical weapon use

The global chemical arms watchdog yesterday opened emergency talks on the suspected poison gas attack in the Syrian town of Douma as more than 390 allegations of chemical weapon use in Syria have been recorded since 2014 by the Organization for the Prohibition of Chemical Weapons (OPCW), an intergovernmental organization that oversees the implementation of the Chemical Weapons Convention.

The Kremlin yesterday dismissed as "groundless" claims that Russia and Syria have not allowed a fact-finding mission by the world's chemical weapons watchdog to enter Douma to probe an alleged gas attack.

"We consider such accusations against Russia to be groundless," President Vladimir Putin's spokesman Dmitry Peskov said, adding that Moscow was in favor of "an impartial investigation."

"It is the lack of approval by the U.N. Department for Safety and Security for OPCW experts to visit the site in Douma that is the problem," Russian Deputy Foreign Minister Sergei Ryabkov told reporters, adding that he checked just a short while ago what was delaying their visit.

Earlier, Britain's embassy to the Netherlands said Russia and Syria had not yet allowed a team from the OPCW to enter Douma, where an attack on April 7, allegedly using chlorine and sarin, killed at least 40 people.

OPCW chief Ahmet Üzümcü had briefed emergency talks about the deployment of the team, which arrived Saturday in Damascus.

Moscow has vowed not to interfere in the team's work and hit out at the United States, saying the weekend strikes by the US, France and Britain on three facilities in Syria were a bid "to undermine the credibility" of the mission.

More than 390 allegations of chemical weapon use in Syria have been recorded by OPCW since 2014, the British envoy to the group said yesterday. Douma was the last opposition holdout in the Eastern Ghouta enclave, which was the target of a regime offensive in February and March that killed hundreds and displaced tens of thousands of people.

"The Syrian regime has an abhorrent record of using chemical weapons against its own people," said Peter Wilson, adding that the use of chemical weapons "has become an all-too-regular weapon of war in the Syrian conflict."

The statement came after the Assad regime allegedly carrying out a chemical attack in Douma, Syria that killed 78 civilians and injured hundreds of others.

"Open-source accounts allege a barrel bomb was used to deliver the chemicals, and a regime helicopter was seen above Douma on the evening of April 7," he added.

Wilson said: "Reliable intelligence indicates that Syrian military officials coordinated what appears to be the use of chlorine in Douma on 7 April," adding, "No other group could have carried out this attack."

He underlined that the world has seen the "harrowing images of men, women and children lying dead with foam in their mouths" and "first-hand accounts from NGOs and aid workers have detailed burns to the eyes, suffocation and skin discoloration, with a chlorine-like odor surrounding the victims."