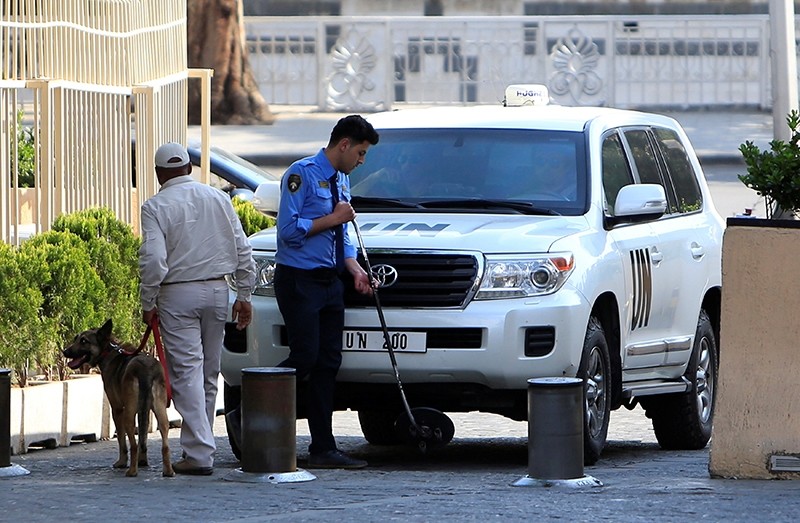 The United Nation vehicles carrying the Organisation for the Prohibition of Chemical Weapons (OPCW) invspectors arrive in Damascus, Syria April 14, 2018. (Reuters Photo)
by Daily Sabah with Agencies Apr 17, 2018 12:00 am

Experts from the global watchdog the Organisation for the Prohibition of Chemical Weapons (OPCW) entered the Syrian town of Douma on Tuesday, state media said.

The delegation from the OPCW entered Douma alongside the Syrian health minister, a source close to the government told the German Press Agency.

The international inspectors arrived in Syria over the weekend to visit the site of a suspected gas attack in Douma, near the capital Damascus, but had not gained access until now.

"As of today, Russia and Syria still refuse to give inspectors access to the site of the attack," the French foreign ministry said Wednesday in a statement. "It is very likely that proof and essential elements are disappearing from this site."

"It is essential that Syria finally gives full, immediate and unfettered access to all of the OPCW's demands, whether to visit sites, interview people or consult documents."

U.S., British and French forces pounded Syria with air strikes early on Saturday in retaliation for the suspected April 7 chemical weapons attack in Douma, which they blame on Syrian President Bashar al-Assad's government.

Relief organizations say dozens of men, women and children were killed in the attack.

U.S. Ambassador Kenneth Ward on Monday said at an OPCW meeting in The Hague that Russia may have tampered with the evidence.

"It is our understanding the Russians may have visited the attack site," he said in comments at a closed-door meeting which were obtained by Reuters.

"It is our concern that they may have tampered with it with the intent of thwarting the efforts of the OPCW Fact-Finding Mission to conduct an effective investigation," he said.