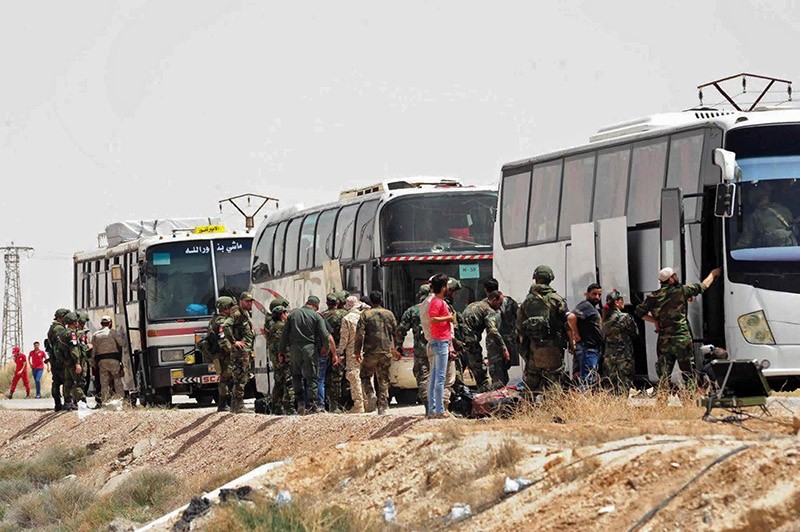 This photo released by the SANA news agency, shows Russian soldiers and regime forces overseeing the evacuation of opposition fighters and their families from the town of Dumayr, northeast of Damascus, Syria, April 19, 2018. (AP Photo)
by Associated Press Apr 19, 2018 12:00 am

Hundreds of Syrian opposition fighters in a town northeast of Damascus handed in their weapons and boarded buses to leave under an evacuation deal, regime media reported on Thursday.

Fighters were to relocate with their families to opposition-held areas in northern Syria, effectively surrendering their town of Dumayr to the Assad regime.

The departure was set to involve 1,500 fighters from the Army of Islam opposition faction with 3,500 of their family members, said the state-run SANA news agency. Their destination was Jarablus, a town shared under Turkish and Syrian opposition control near the Syria-Turkey border.

Dumayr, in the Qalamoun mountains, is a minutes' drive away from the eastern Ghouta region, a former opposition enclave that came under full regime control last week after a driving offensive that culminated in a suspected chemical weapons attack.

Inspectors from the Organization for the Prohibition of Chemical Weapons were still not able to reach the scene, 12 days after the suspected attack.

The April 7 attack prompted the United States, France, and Britain to strike at suspected Syrian chemical weapons facilities. The three countries said they held the Assad regime and its ally Russia responsible for the attack.

A U.N. security team touring the sites of the alleged attack on Tuesday, was shot at and subjected to a blast, said OPCW Director-General Ahmet Üzümcü.

The security team was supposed to give the all-clear for OPCW inspectors to follow, but their visit was put on hold pending the security situation, Üzümcü added.

Journalists visited Douma, where the suspected attack took place, a day before the U.N. security team. They were not exposed to any weapons fire.

Associated Press journalists spoke to witnesses who said they were overwhelmed by the smell of chlorine and experienced fainting during the April 7 assault.

First responders released videos purporting to show fatalities from the attack — lifeless bodies collapsed in an apartment, with foam around their mouths, a sign of asphyxiation.

The Army of Islam, which controlled Douma at the time of the attack, surrendered the town to the regime days later.

Syrian and Iraqi forces have driven Daesh from nearly all the territory the group once held, but the terrorists have maintained a presence in the remote desert areas along the border. Iraq has carried out airstrikes in Syria against the group in the past.