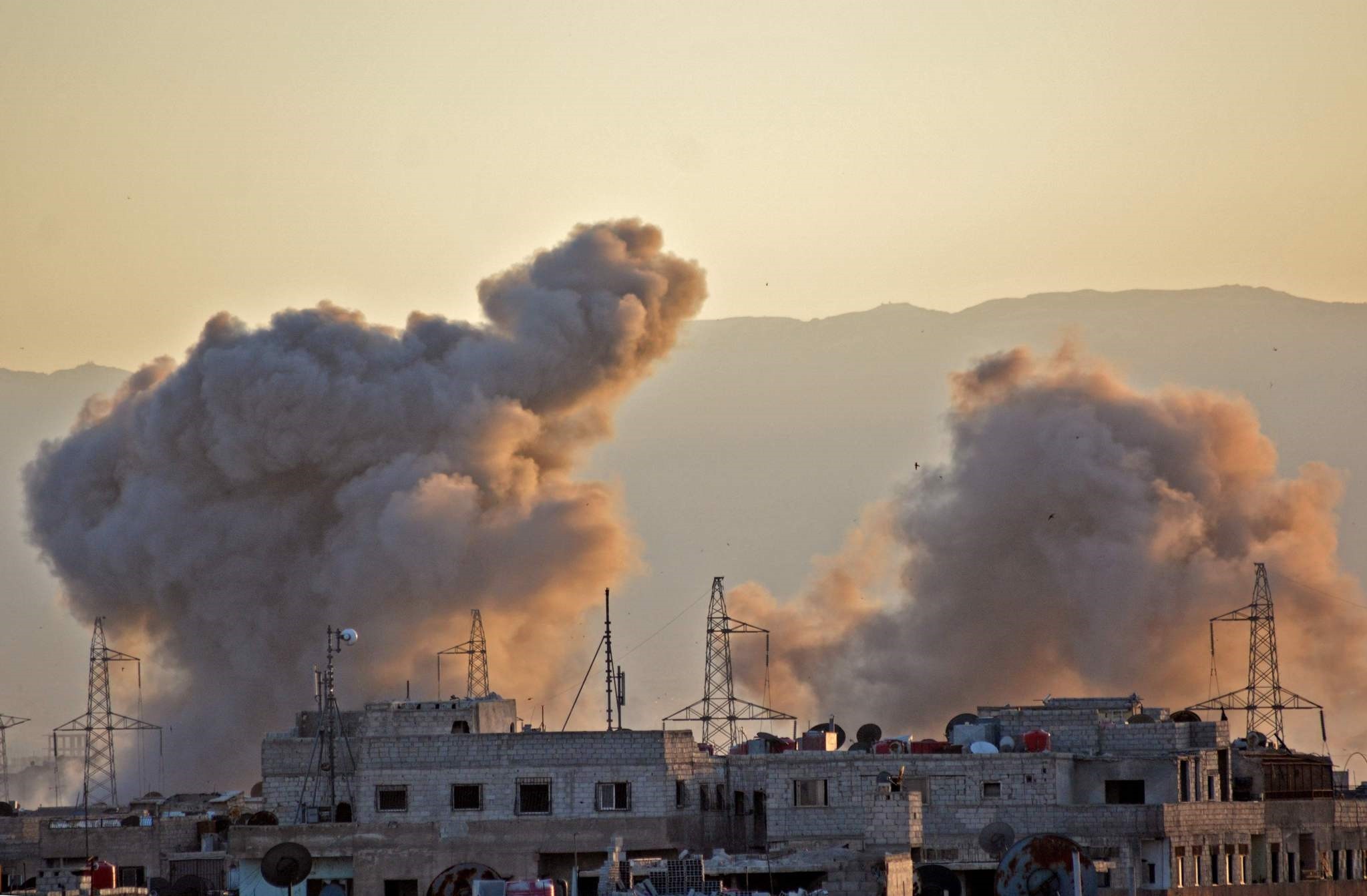 Smoke billows during Syrian army air strikes as seen from the Yarmuk Palestinian refugee camp in southern Damascus on April 24, 2018. (AFP Photo)
by Daily Sabah with Agencies Apr 24, 2018 12:00 am

Israel's defense minister warned yesterday his country would destroy any advanced Russian air defense system deployed in Syria that are used against Israeli jets, but insisted there was no interest in escalation with Moscow.

"One thing must be very clear - if someone shoots at our planes, we will destroy them," Avigdor Lieberman said in an interview with the Israeli website Ynet.

"There are Russian systems in Syria and they are not used against us. We have an open line, a real dialogue, sometimes not so simple, but a frank and open dialogue with the Russians," he said, adding this has prevented confrontations with Moscow.

The defense minister said Israel does not intervene in Syria's internal affairs but would not allow Iran, a key backer of President Bashar Assad, along with Moscow - to entrench itself in the neighboring country.

His comments came after Russia's daily Kommersant newspaper, citing unnamed military sources, reported Monday that Russia might start supplying the anti-aircraft missile systems to Syria in the near future. Russia has its more advanced S-400 deployed at its own military institutions in the country, but they were not activated in recent U.S.-led air raids.

Foreign Minister Sergei Lavrov said Monday that Russia had not yet decided whether it would deliver advanced S-300 missile systems to Syria, but would not make a secret of the matter if it took such a decision, the TASS news agency reported.

According to military analysts, the S-300 surface-to-air missile system would improve Russia's ability to control airspace in Syria where Moscow's forces support Assad and could be aimed at deterring tougher U.S. action.

The state-of-the-art S-300 is capable of engaging up to six targets simultaneously, with two missiles assigned per target to ensure a high kill probability. The missile systems have a range of 200 kilometers, which cover the airspace of Lebanon, sometimes used by Israeli planes to strike Syria and Israel itself.

The Assad regime was set to get the missile defense systems in 2013, but Russian President Vladimir Putin froze the deal after talks with European Union leaders and Israel. He stressed, however, that Russia would review the decision if the U.S. attacked. In the wake of the missile strikes against the regime, the delivery of the S-300 looks more than likely.

Lavrov said Friday that Western military strikes on Syria this month had removed any moral obligation Russia had to withhold the missile systems from its ally, Syrian President Bashar Assad.

"We'll have to wait to see what specific decisions the Russian leadership and representatives of Syria will take," TASS cited Lavrov as saying on Monday during a visit to Beijing. "There is probably no secret about this and it can all be announced [if a decision is taken]," added Lavrov.

Kommersant said on Monday that experts believed that Israel would react negatively to any decision to supply the missiles and might bomb the area where they would be deployed.

A Russian diplomat who spoke to Reuters on condition of anonymity said Israel had asked Moscow not to supply the Syrian military with the S-300s. An Israeli government spokesman declined to comment.

Israel has made repeated efforts to persuade Moscow not to sell the system to Syria, as it fears this would hinder its aerial capabilities against arms shipments to the Iranian-backed Lebanese group Hezbollah. Israel has carried out scores of air strikes against suspected shipments.