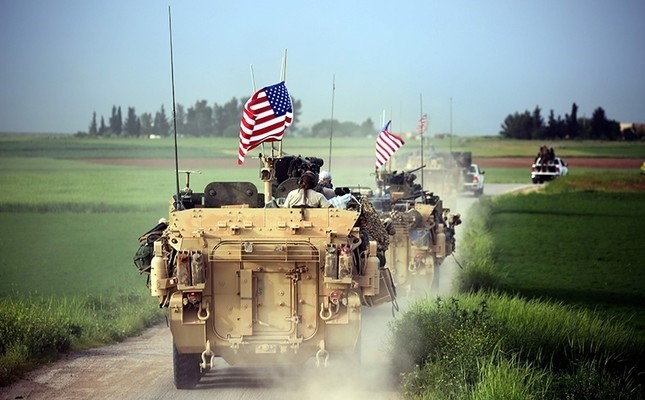 US forces, accompanied by YPG militants, drive their armored vehicles near the northern Syrian village of Darbasiyah, on the border with Turkey on April 28, 2017. (AFP Photo)
by Compiled from Wire Services May 19, 2018 12:00 am

The Trump administration will withdraw assistance from northwest Syria and focus recovery efforts on areas where U.S.-led forces have retaken territory from Daesh in the northeast, U.S. officials with knowledge of the decision said on Friday.

CBS, which first reported the story, said tens of millions of dollars will be cut from previous U.S.-backed efforts in the northwest, including projects for "countering violent extremism, supporting independent society and independent media, strengthening education, and advocating for community policing."

U.S. officials told Reuters that humanitarian assistance would not be affected in the northwest around Idlib province, which is the largest chunk of Syrian territory held by insurgent factions, including al Qaeda's former affiliate in the Syrian war.

"U.S. assistance for programs in northwest Syria are being freed up to provide potential increased support for priorities in northeast Syria," a State Department official told Reuters.

A second official said the administration believed it wanted to move the assistance to areas where the U.S. had more control.

President Donald Trump in March froze more than $200 million in funds for recovery efforts in Syria while his administration reassesses Washington's role in the Syrian conflict. The review is still under way, one U.S. official said.

Trump said in March that it was time for the United States to leave Syria, following allied victories against Daesh terrorists. About 2,000 U.S. troops are deployed in Syria.

He also ordered a freeze on $200 million assistance to the PKK's Syrian affiliate the People's Protection Units (YPG), which functions functioning under the umbrella group the Syrian Democratic Forces (SDF).

In April, however, Trump deepened U.S. involvement by ordering missile strikes against Syria in response to a poison gas attack that killed dozens of people.

A third U.S. official said the cuts in the northwest would take place over a period of months.

"The danger is a repeat of what the president criticized about Iraq - leaving a vacuum where the violence can get worse and extremists can exploit that," the official added.

The Democratic Union Party (PYD) and its military wing the YPG are Syrian branches of the PKK terrorist network, which has waged war against Turkey for more than 30 years.

Despite Turkey's objections, the U.S. has provided the YPG with arms, calling it an ally in the fight against Daesh, but ignoring its terrorist group status.

Earlier this week, Turkish Foreign Minister Mevlüt Çavuşoğlu said that he would be visiting U.S. Secretary of State Mike Pompeo in Washington early next month to discuss a roadmap for Manbij, in northern Syria.

Manbij has caused friction in Turkish-U.S. ties, as Turkey rejects the fact that the U.S. is working with the terrorist YPG and instead demands the group's withdrawal from the area.