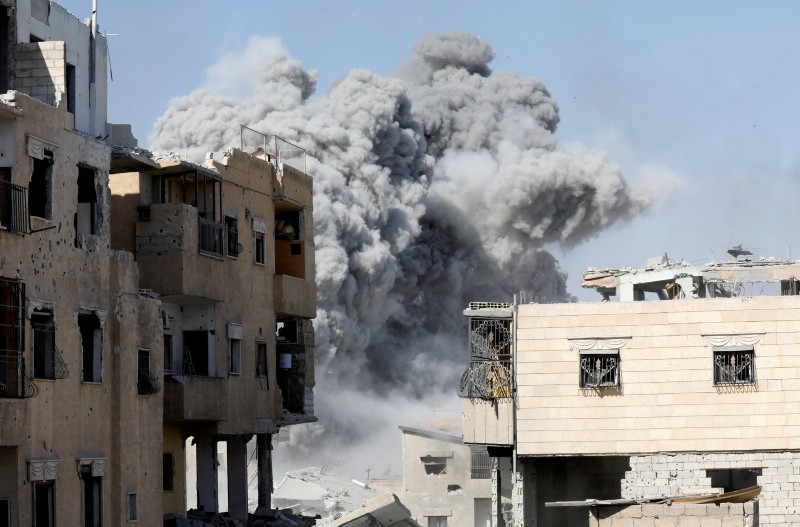 Smoke rises at the positions of the Daesh terrorists after an air strike by the coalition forces near the stadium in Raqqa, Syria, October 4, 2017. (Reuters Photo)
by Compiled from Wire Services Jun 05, 2018 12:00 am

An international human rights group on Tuesday accused the U.S. and its allies of showing little regard for civilians' lives while attacking the Syrian city that was once the de-facto capital of the Daesh terrorist group, an allegation denied by the American military.

Amnesty International said the U.S.-led coalition's 2017 assault on Raqqa killed hundreds of civilians and reduced sections of the city to rubble.

Researchers for Amnesty interviewed more than 100 residents and visited 42 coalition targets in the city in a two-week period in February. They published their findings in a report titled "'War of Annihilation': Devastating Toll on Civilians, Raqqa - Syria" in a reference to the language used by U.S. Defense Secretary Jim Mattis in the lead-up to the campaign.

"When so many civilians are killed in attack after attack, something is clearly wrong," said Donatella Rovera, one of the researchers who visited the city.

The report documented the cases of four families whose experiences it said were emblematic of wider patterns and provided "prima facie evidence that several coalition attacks which killed and injured civilians violated international humanitarian law".

It said that in the four cases detailed in its report, air strikes using powerful munitions had hit buildings full of civilians who had been staying there for long periods.

"Witnesses reported that there were no fighters in the vicinity at the time of the attacks. Such attacks could be either direct attacks on civilians or civilian objects or indiscriminate attacks," the report said of the four cases studied, adding that such attacks amounted to war crimes.

Amnesty called on the coalition and member states to acknowledge the scale of devastation, make public necessary information for an independent investigation and make reparations to victims.

U.S. Army Col. Sean Ryan, spokesman for the coalition, called the assertions "grossly inaccurate." He said the coalition and allied Syrian forces organized safe passages for residents to flee, but Daesh militants trapped them inside to use as human shields.

"When you have an enemy that uses noncombatants as collateral damage, it's very difficult when you fight an enemy like that to completely avoid any casualties," Ryan said.

Benjamin Walsby, another investigator on the Amnesty team, said the coalition should have adjusted its strategy accordingly.

"If you rely on long-range tactics like artillery and airstrikes, then civilians are very likely to pay the price, and that appears to be what happened in Raqqa," he said.

The battle for Raqqa, once a city of 200,000 people, played out over four harrowing months in 2017, with the coalition playing a supporting role as the Syrian Democratic Forces (SDF), dominated by PKK terrorist group's Syrian offshoot the People's Protection Forces (YPG), fought street by street.

The coalition unleashed wave after wave of airstrikes and shell fire until the last of the militants left Raqqa in October 2017.

Command Sgt. John Wayne Troxell of the U.S. Army said in January that U.S. Marines had fired 30,000 artillery shells on the city.

When The Associated Press visited in April, it found Raqqa in ruins and its streets smelling of rotting bodies. Civil workers had pulled nearly 500 corpses from the rubble and were still finding more six months after the fighting.

Residents complained that the coalition bombing was indiscriminate and demanded compensation. According to the Raqqa Civil Council, which took over the administration of the city, 65 percent of homes had been destroyed.

In its monthly casualty reports, the coalition has acknowledged responsibility for 32 civilian deaths in Raqqa between June and October, while saying it is still investigating open cases. Ryan, the coalition spokesman could not say whether officials were interviewing relatives of the deceased as part of their investigations.

Amnesty International's report says hundreds of civilians were killed, while the Airwars monitoring group says it has evidence of 1,400 fatalities.

Amnesty investigators called on the coalition to release strike data and details on the decision-making process behind target selection. They said the coalition rebuffed requests for information.

"It doesn't matter how precise your strikes are. They are only as precise as the information behind them, and if the information isn't right you're going to shoot at the wrong things," Walsby said, adding that a thorough investigation could build a case for a war crimes trial.

Ryan said the coalition was never contacted by Amnesty.

The coalition maintains that it relied on precision weapons and selected targets with the best information available and that it did everything it could to minimize civilian casualties.

"I would put the blame on ISIS for destroying the city," Ryan said, using an alternate acronym for Daesh. "We liberated the city of Raqqa. The city deserves better and we're going to try to provide that."