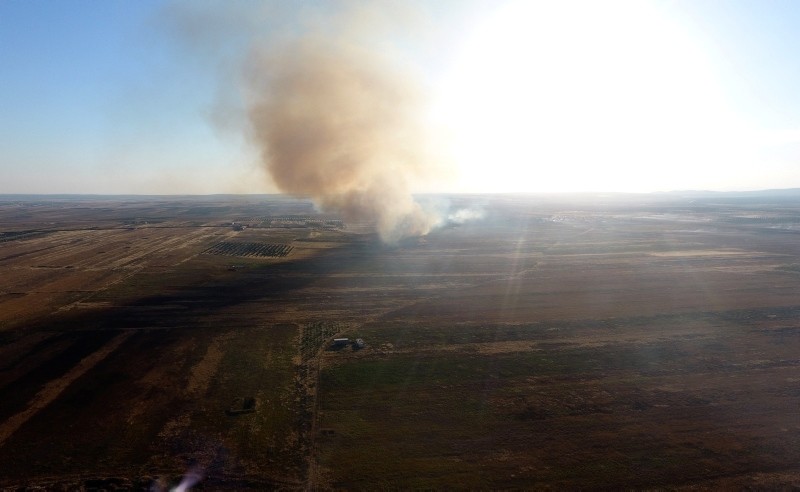 This drone footage captured by the Anadolu Agency on June 9, 2018, smoke rises from rural homes and fields surrounding the northwestern Syrian town of Tal Rifaat.
by Daily Sabah Jun 09, 2018 12:00 am

PKK's Syrian offshoot People's Protection Forces (YPG) has been looting and vandalizing the homes and lands of civilians in the Syrian town of Tal Rifaat.

According to information Anadolu Agency obtained from local sources, YPG/PKK terrorists looted some houses belonging to civilians in the villages of Menagh and Ayn Dakna.

Footage shot by Anadolu Agency captures the moments when houses were set ablaze and smoke is seen rising from the fields.

Allito said a possible Turkish-Russian negotiation on liberating Tal Rifaat from terrorist groups could force the PYD/YPG/PKK terrorists and Iran-backed militias to leave the area securing peace and safety.

Another local official Mahmoud Allito, head of Tal Rifaat's local council, had said in a statement in March that the YPG/PKK captured more than 50 villages in the region in 2016.

Turkey and Russia continue talks to clear Tal Rifaat of terrorists. If talks concluded positively, around 250,000 civilians will return to their homes.

Turkey on Jan. 20 launched Operation Olive Branch to remove YPG/PKK and Daesh terrorists from northwestern Afrin. On March 18, Turkish troops and Free Syrian Army members liberated the town of Afrin, on the 58th day of the operation.

In early 2016, YPG/PKK terrorists aimed to capture the regions between the east bank of the Euphrates River and western Afrin, in order to link the lands it had already captured.

The terror group, moving from Afrin to the southeast and from Manbij to the west, tried to take control of Tal Rifaat and Al-Bab and link the line. By doing so, the YPG/PKK sought to gain dominance along the Syrian-Turkish border.

However, Turkey's Operation Euphrates Shield made it impossible for the terrorists to achieve their aims.

During its invasion of Tal Rifaat, the YPG/PKK forced around 250,000 Arabs out. Residents of the city sought refuge in Azaz, which is adjacent to the Euphrates Shield area and is under opposition control.

The terrorists started to accommodate Kurdish families in Tal Rifaat who they brought from Afrin.