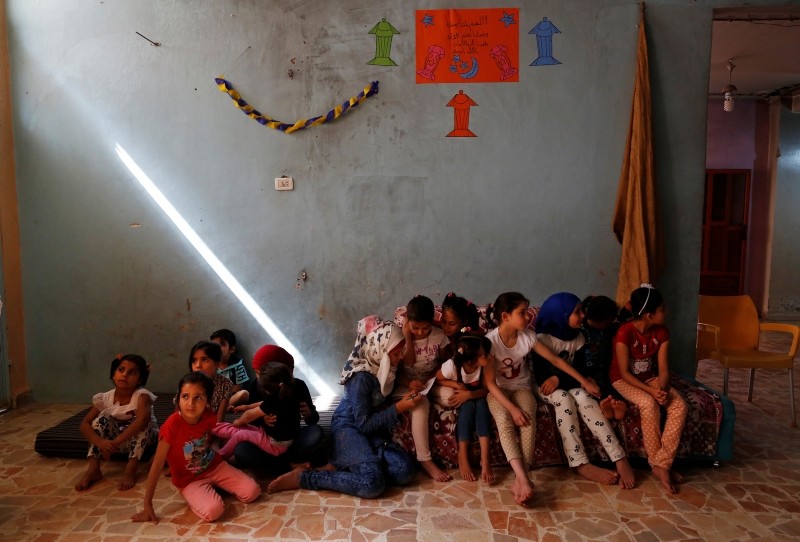 Nearly 50 children orphaned by the Syrian war escaped the hell that was their hometown of Aleppo after they appeared in a distressing video and appealed for their lives as Assad regime forces moved in under a hail of fire.

In the year and half since, the children and their instructors have been uprooted twice more: once to escape similar bombardment in another opposition stronghold and again when they fled a town that has been overwhelmed by people seeking shelter from Syria's war.

The orphanage first established in opposition-held eastern Aleppo, known as the Center for the Exceptional, has finally landed in a small house in the sleepy northern town of Jarablus, which was once a hub for Daesh terrorists along the border with Turkey but has been liberated after Turkish military launched Operation Euphrates Shield in August 2016.

More than six million people — nearly a quarter of Syria's pre-war population — have been displaced inside Syria because of the war. For Aleppo's orphans, the war trauma and the loss of parents were compounded by the recurrent uprooting from the only familiar place they knew.

"It was better back home. We had our toys and our home. We had a court to play in and we had a toys room, a looms area, and a hall for learning singing," said Yasmine Qamuz, an 11-year-old whose mother is missing and whose father died of a heart condition in Aleppo. Qamuz said she left her favorite yellow doll behind in Aleppo.

The fall of Aleppo came after one of the most devastating battles of the civil war, now in its eighth year. Syria's largest city was for years divided between opposition- and regime-controlled areas. After four years of opposition rule, the regime recaptured eastern Aleppo in December 2016 after a monthslong military offensive backed by Russia.

The bombardment of eastern Aleppo drove residents — including the children — underground. One of the children was wounded by shrapnel when he tried to come up from the basement where they had huddled for weeks. During the siege, the orphanage posted an online video in which Qamuz, the little girl, pleaded for an exit route.

Soon after, permission came for their evacuation. There was a hitch as last-minute negotiations over their destination delayed their departure. The children were encircled by gunmen for 22 hours in the buses meant to take them out of the crumbling enclave, until the deal was finally sealed.

First, they went to another opposition-held town in the neighboring province of Idlib. When that came under attack, they were moved north to the town of Azaz. But soon that was hit by a huge wave of displaced people, so they had to leave again.

Jarablus, a border town with just over 10,000 residents before the war, saw its population almost quadruple thanks to Turkey's successful operation as newly displaced Syrians moved in.

Still, it remains a small town. There are few places for the children to go. The only day trip they go on is to the river banks.

"They are city children," said Hikmat Sheihan, one of the orphanage administrators. "In Aleppo, they had daily visitors or events. Here, there are no events and few visitors. Those with them in school are from different environments."

Three children who lost their mother — an orphanage worker— and their father in the offensive are expected to be reunified with their extended families in Aleppo, for a short visit.

"When we left we came here because it's a safe area and there is no gunfire or shelling," said Asmar al-Halabi, who founded the orphanage in 2015. But with the move, private donations also shrank as world attention shifted elsewhere.

On a recent afternoon, the children gathered in excitement because of visitors — an Associated Press team escorted by Turkish officials. Some of the boys were attending math classes in the basement, even though school is on summer recess. Girls sat in a circle and giggled as they said they prefer the summer because it means they don't have to wake up early. In keeping with the holy month of Ramadan, they read the Quran during the day and slept early to wake up for the dawn meal. Many said they were fasting.

"All the kids' memories are of Aleppo," he said. "We wish we could go back."