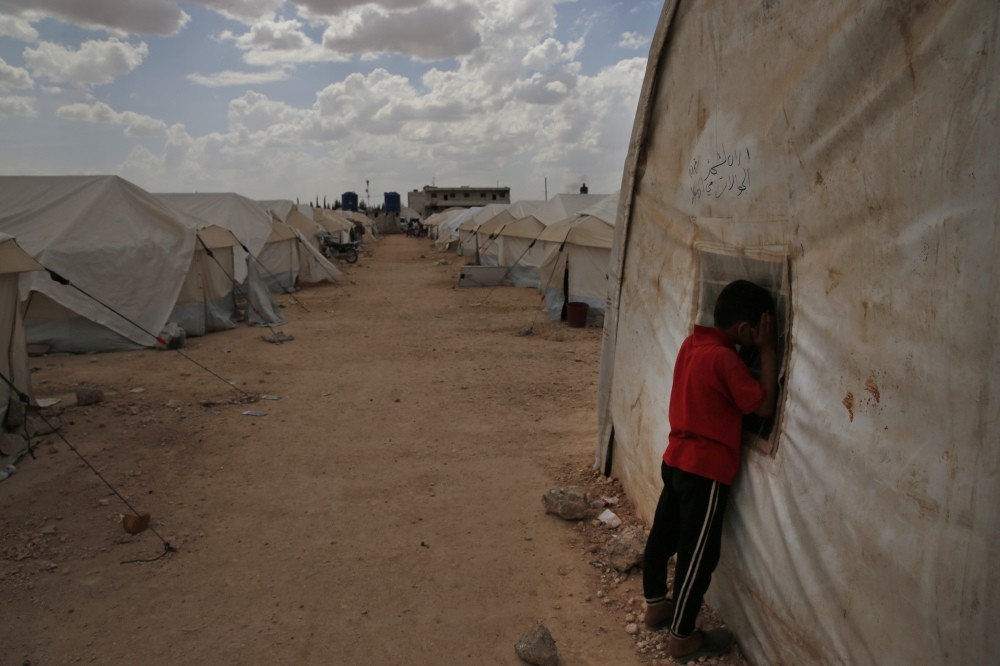 A Syrian child peeks inside a tent during leisure activities at a camp for internally displaced people in al-Bab, northern Syria, May 29.
by Compiled from Wire Services Jun 12, 2018 12:00 am

Syria is facing the worst crisis of the seven year war as the battle for Idlib leaves 2.5 million civilians with no place to go in their shattered homeland, according to the U.N.

The U.N. humanitarian agency's top official for Syria is expressing concern about recent airstrikes in opposition-held Idlib province, warning, "We may have not seen the worst of the crisis" in Syria even after seven years of war.

Panos Moumtzis of the U.N. Office for the Coordination of Humanitarian Affairs (OCHA) says military escalation could make Idlib's situation "much more complicated and brutal" than other conflict zones in Syria. OCHA is on "high alert" for possible further displacement among the estimated 2-1/2 million people in Idlib: "There is no place left to go" in Syria.

"With this escalation, this deterioration, we worry really about seeing 2-1/2 million people becoming displaced more and more towards the border of Turkey if this is to continue," he added.

The U.N. regional humanitarian coordinator for Syria cited reports of a deadly air strike on Sunday that had killed 11 people and hit a pediatric hospital. Air strikes on a village in Idlib killed at least 44 people overnight, the highest death toll in a single attack on the region this year, the Syrian Observatory for Human Rights said on Friday.

The monitoring group said that Russian warplanes probably carried out those attacks. Russia is a main backer of Bashar Assad's forces and has helped turn the tide of war in his favor with a campaign of airstrikes. Russia entered the Syria conflict in September 2015, offering support to Damascus, which changed the course of the war, allowing government troops to retake more than half the country from opposition and Daesh terrorists.

Moumtzis said that a major battle for Idlib could be "much more complicated and brutal" than fighting for eastern Aleppo and eastern Ghouta – two opposition-held areas that surrendered with evacuations in 2016 and 2018, respectively.

"We cannot see a military solution, it cannot take place," he said. "Our worry is that with the Idlib situation we may have not [yet] seen the worst in Syria."

Idlib, which remains under opposition control, was designated as a "de-escalation zone" in which acts of aggression are expressly forbidden in May of last year. Nevertheless, the Assad regime and Russian forces have continued to carry out attacks on the region.

Turkey, Iran and Russia launched a Syrian peace process in Astana, which aims to complement the U.N.-brokered talks in Geneva, to bring an end to the seven-year conflict in the country. Last year, Turkey, Iran and Russia agreed in Astana to establish de-escalation zones in the northern province of Idlib and parts of neighboring Latakia, Hama and Aleppo. Under the Astana agreement, Turkey is to gradually establish 12 observation points from Idlib's north to south to monitor and sustain the current ceasefire agreement for the de-escalation zones, deliver humanitarian aid and ensure the secure return of displaced people.

Regarding the ongoing humanitarian crisis in the war-torn country, Moumtzis said yesterday that 920,000 people were displaced in Syria between January and April, the highest number of any four-month span since the war began.

"We are seeing a massive displacement inside Syria. ... From January to April, there were over 920,000 newly displaced people," he told reporters in Geneva. "This was the highest displacement in that short period of time we have seen since the conflict started," he said. It brings the number of people internally displaced in the war-ravaged country to 6.2 million, while there are still some 5.6 million Syrian refugees in neighboring countries, according to U.N. figures.