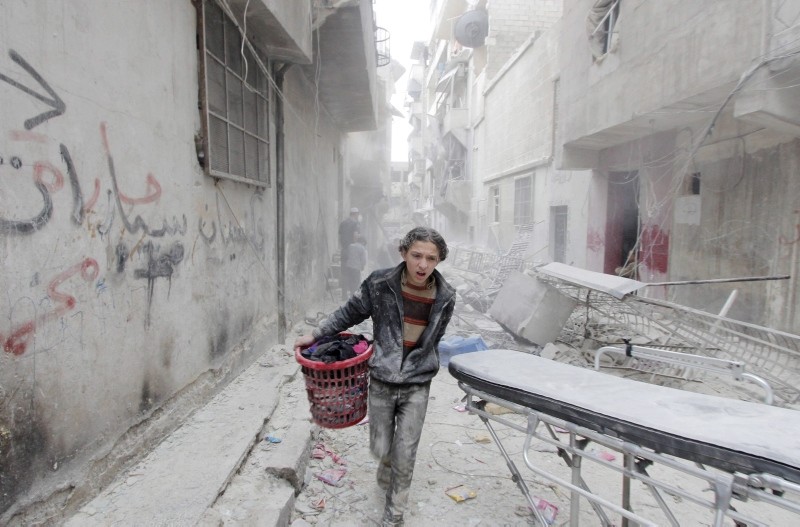 A boy carries his belongings at a site hit by what activists said was a barrel bomb dropped by forces loyal to Bashar al-Assad in Aleppo's al-Fardous district, Syria April 2, 2015. (Reuters Photo)
by Jun 22, 2018 12:00 am

Assad regime helicopters dropped barrel bombs on opposition areas of the southwest on Friday for the first time in a year, a war monitor and an opposition fighter said, escalating an assault that has so far included artillery but only limited use of air power.

Abu Bakr al-Hassan, spokesman for the opposition group Jaish al-Thawra, said the munitions had been dropped on three towns and villages, and that war planes had hit another.

Bashar al-Assad has sworn to recapture the area bordering Jordan and the Israeli-occupied Golan Heights and the army began ramping up an assault there this week.

The attack has been concentrated on the towns of al-Harak and Busra al-Harir, which would bisect a finger of opposition ground jutting northwards into land held by the Assad regime.

Syrian state television said on Friday that army units had targeted "lairs and movements of terrorists" in the area.

A big offensive risks a wider escalation, as the United States has warned Damascus it will respond to breaches of a "de-escalation" brokered by Washington and Assad's Russian allies last year to contain the war in the southwest.

On Thursday, the U.S. State Department said it had reports the Assad regime had "violated the southwest de-escalation zone and initiated air strikes, artillery and rocket attacks", and warned of "serious repercussions."

The regime's use of barrel bombs on Friday tests the U.S. position, said Hassan, the opposition spokesman, whose group fights under the banner of the Free Syrian Army (FSA).

"I believe it is testing two things: the steadfastness of the FSA fighters and the degree of U.S. commitment to the de-escalation agreement in the south," he told Reuters.

The region is also of strategic concern to Israel, which has struck Iran-backed militia allied to the army.

Those militia, including Lebanon's Hezbollah, have played an important role in Assad's seven-year-old war against the rebels, including since Russia entered the conflict in 2015.

The Russian ambassador to Lebanon was quoted on Friday in the pro-Hezbollah newspaper al-Akhbar as saying Assad's military was recovering the southwest with help from Moscow.

"We say that the Syrian army now, with support from Russian forces, is recovering its land in the south and restoring the authority of the Syrian state," it quoted him as saying in an interview.

"Israel has no justification to carry out any action that obstructs the fight against terrorism," he added.

Assad has this year recaptured the last remaining enclaves of insurgent territory near the capital Damascus and the city of Homs, including the densely populated eastern Ghouta region.

But there are still large areas outside his control. Apart from the southwest, the opposition fighters also hold a swathe of northwest Syria. Opposition groups backed by Turkey hold parts of the northern border area.

And the quarter of Syria east of the Euphrates is controlled by PKK-linked People's Protection Units (YPG)-dominated Syrian Democratic Forces (SDF), which are also supported by the United States. The United States also has a base at Tanf, near Syria's borders with Iraq and Jordan, which controls the Damascus-Baghdad highway.

On Thursday a commander in the regional alliance backing Assad said a U.S. strike had killed a Syrian army officer near Tanf. However, the Pentagon said a U.S.-backed SDF had engaged "an unidentified hostile force" near Tanf, without casualties on either side.

The Assad regime has denied using barrel bombs, containers filled with explosive material that are dropped from helicopters and which cannot be accurately aimed. However, United Nations investigators have extensively documented its use of them during the conflict.