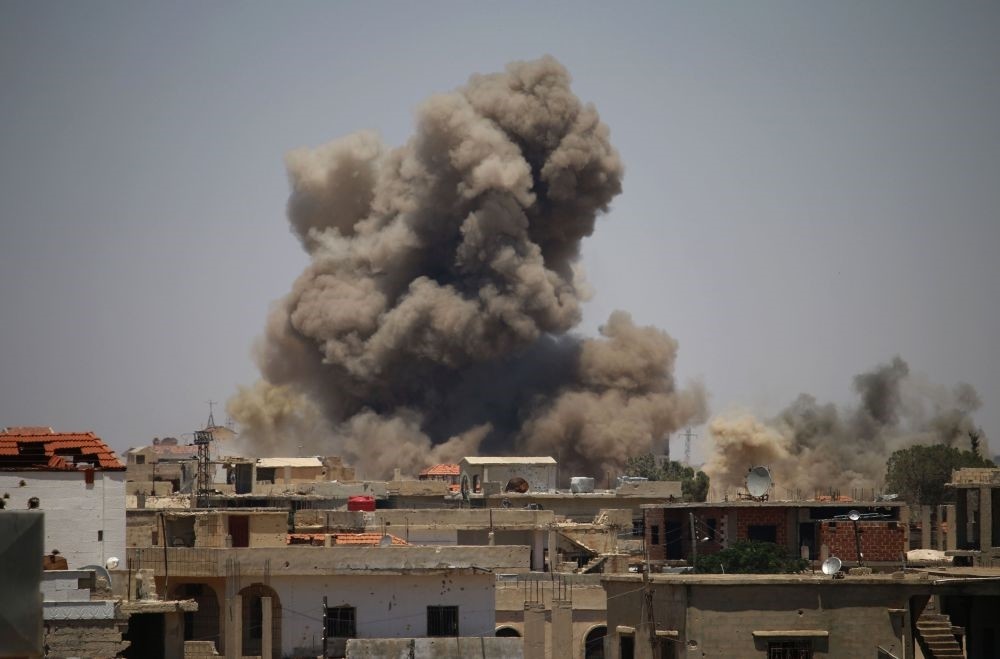 Smoke rises above buildings during an airstrike by Syrian regime forces on the town of Busra al-Harir in the eastern province of Daraa, June 24.
by Compiled from Wire Services Jun 26, 2018 12:00 am

Syrian regime ramped up bombardment to oust the opposition from the strategic city of Daraa, causing dozens of families to flee as Jordan refuses to take them in

The Syrian regime pounded opposition-held parts of the southern city of Daraa with rockets and barrel bombs overnight causing dozens of families to flee, a monitor and an Agence France-Presse (AFP) reporter said yesterday.

Regime forces have ramped up bombardment of the wider province of the same name for nearly a week, as fears rise of a full-blown regime assault to retake the country's south from the opposition.

As violence in the city of Daraa claimed more lives and displaced thousands, Jordan said it wouldn't take in Syrians fleeing the new offensive. The Jordan Times quoted Jordanian government spokeswoman Jumana Ghunaimat as saying that Jordan has already absorbed large numbers of Syrian refugees and that "we simply cannot receive more," according to the Associated Press.

An AFP correspondent said the heavy bombardment pushed dozens of terrified families to flee their homes on foot or on the back of motorbikes to seek shelter in olive groves on the outskirts of the city. Some families took refuge in small shelters or tents between the olive trees, the correspondent said.

Russia-backed regime forces have been preparing an offensive to oust the opposition from Syria's south, a strategic area bordering Jordan and the Israeli-occupied Golan Heights. Bashar al-Assad's forces have ramped up their bombardment of Daraa's eastern countryside since last Tuesday, and over the weekend ally Russia bombarded it for the first time in a year. Regime forces yesterday morning launched barrel bombs on the town of Basr al-Harir, while heavy shelling and rocket fire of the Al-Laja area put a civil defense center out of service.

The uptick in violence has killed at least 28 civilians in just under a week, the monitor said, with rescue teams struggling to reach affected areas due to the intensity of the bombing.

More than 17,000 civilians have also been displaced from their homes in Daraa's eastern countryside, the Observatory said. The United Nations has warned that renewed hostilities could put 750,000 lives in opposition parts of Daraa at risk.

Parts of Daraa, as well as the neighboring provinces of Quneitra and Sweida, fall under a "de-escalation zone" agreed upon by Russia, the U.S. and Jordan in July 2017. Since then, Russia, whose warplanes have backed Assad's forces since 2015, had refrained from bombing the south of the country until it resumed strikes Saturday.

The city of Daraa is where anti-regime protests began in March 2011 as part of the Arab Spring in Syria and later escalated into a civil war that has so far killed 400,000 and displaced half the country's population. Daraa and the adjacent province of Quneitra are mostly held by opposition forces, while the regime controls most of the province of Sweida to the east. Syria's war has killed more than 350,000 people and displaced millions since it started in 2011 with the brutal repression of anti-regime protests.