Western powers demand Russia to 'uphold its commitments' in Syria 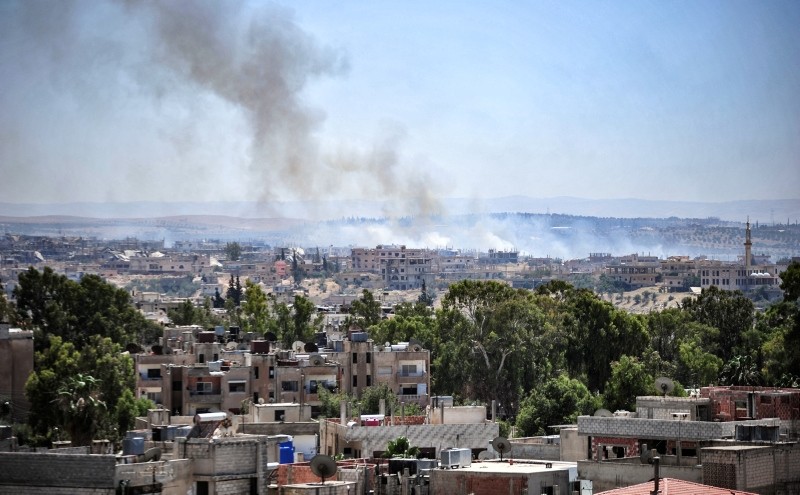 A handout picture released by the official Syrian Arab News Agency (SANA) on June 27, 2018 shows smoke rising above opposition held areas from government forces' bombardment in the southeastern part of the city of Daraa in southern Syria. (AFP Photo)
by Jun 27, 2018 12:00 am

Western powers on the U.N. Security Council called Wednesday for Moscow to "uphold its commitments" in Syria and halt a Russian-backed offensive by Assad regime forces in the south, where a ceasefire is meant to be in place.

"The United States can confirm that Russia itself launched air strikes in the southwest de-escalation zone in recent days," said Jonathan Cohen, the U.S. deputy ambassador to the United Nations.

"To be clear: the unilateral military operations underway by the Assad regime and Russia in southwest Syria represent a violation of the ceasefire arrangement reaffirmed by President (Donald) Trump and President (Vladimir) Putin," he said, after deadly air strikes pounded the southwest of Syria and its main city Daraa, where the uprising against Bashar al-Assad started in 2011.

"The United States remains determined to keep our commitment to the ceasefire," Cohen told the monthly U.N. meeting on Syria.

"We urge our Russian partners to also uphold the ceasefire that it helped to establish, with the partnership of Jordan and the United States."

French ambassador Francois Delattre called on "everyone, starting with Russia, to uphold their commitments so that this offensive ceases immediately."

"It is vital that Russia honors the agreement reached a year ago and immediately guarantees an end to hostilities," he said, noting that "an additional wave of refugees would create a long-term destabilization of neighboring countries, in particular Jordan."

British ambassador Karen Pierce joined her Dutch and Swedish counterparts in warning of a re-run of the offensives last year against the rebel enclaves of Aleppo and eastern Ghouta, including deadly bombardments followed by a retaking of territory and an accord to evacuate rebels from the areas.

"I join France and America in urging Russia to uphold the commitments under this agreement and ensure that the Syrian government abides by the ceasefire so that we can avert a further humanitarian crisis," she said.

Staffan de Mistura, the U.N. special envoy to Syria, joined the discussion by video uplink, looking concerned about the escalation, which he warned could jeopardize renewed efforts to find a political settlement to the seven-year conflict.

The south is meant to be protected by a ceasefire put in place last year by Russia, Jordan, and the United States, but Assad -- having subdued the area around Damascus by force -- has set his sights on retaking the area.

After a week of air strikes and artillery fire on rebel towns across Daraa province, his troops turned to the opposition-held half of the provincial capital on Tuesday.

The bombing continued into Wednesday, said the Syrian Observatory for Human Rights.