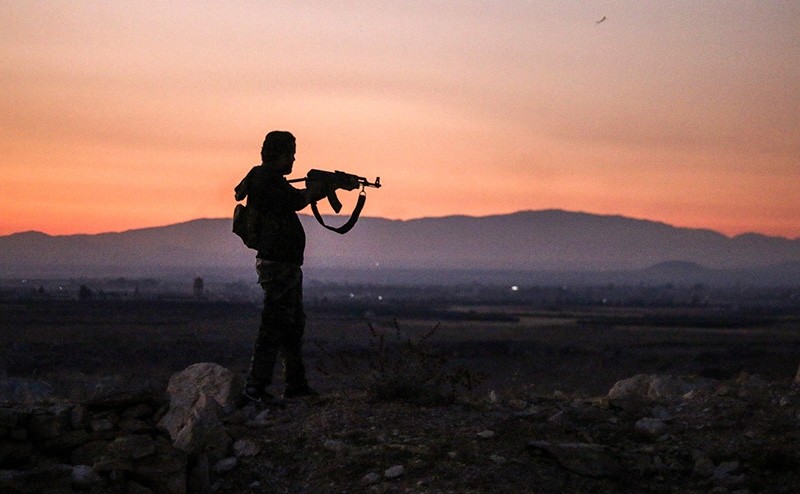 A Syrian opposition fighter aims his Kalashnikov assault rifle as he stands near the frontline against government forces west of the embattled southern city of Daraa on July 3, 2018. (AFP Photo)
by Daily Sabah with AFP
Jul 04, 2018 12:00 am

Syrian opposition said Wednesday that talks with regime ally Russia on handing over their remaining territory in the southern province of Daraa had failed as they opposed giving up their heavy arms.

"Negotiations with the Russian enemy in Busra al-Sham have failed, after they insisted on the surrender of heavy weapons," the opposition's Central Operations Room in the South said in a tweet.

"This round of negotiations didn't produce any results... The session ended and no future meetings have been set," spokesman Ibrahim Jabbawi said.

Shortly after the announcement, Syrian Observatory for Human Rights said Russian airstrikes had hit southwestern Syria for the first time in four days, hitting the opposition-held towns of Tafas and Saida.

Moscow has been backing a two-week offensive by Syrian President Bashar Assad's forces against the opposition in the southern provinces of Daraa and Quneitra.

But it is simultaneously brokering talks with opposition-held towns for negotiated surrenders in a carrot-and-stick strategy that Russia and the regime have successfully used in the past.

More than 30 towns have already agreed to return to regime control and talks were focused on remaining opposition territory in Daraa's western countryside and the southern half of the city.

The opposition was set to meet with a Russian delegation on Wednesday afternoon to deliver their decision on Moscow's proposal for a regime takeover of the rest of the south, a spokesman for the opposition's southern operations said.

A source close to the talks said the meeting would take place at 4 p.m. local time (1300 GMT).

About 90 minutes after the meeting was set to begin, the joint rebel command for the south announced the talks had "failed."

In that session, opposition proposed a ceasefire, the army's withdrawal from towns it had already taken, and safe passage to opposition territory elsewhere for fighters or civilians refusing to live under regime control.

But Moscow roundly rejected the terms, the source said, and responded with a counter-proposal.

It told negotiators that population transfers were not on the table in the south, although it had agreed to them in other areas like eastern Ghouta and Aleppo.

Russia insisted the army would return to its pre-2011 positions, and local police would take over towns in coordination with Russian military police.

The Russian delegation warned opposition factions that Wednesday "would be their last day to negotiate, and that they'd have to submit their final answer in the afternoon meeting," the source said.

Moscow has used tough deadlines in the past with opposition negotiators but has extended them at times.

According to the Syrian Observatory for Human Rights, a Britain-based war monitor, air strikes had stopped for several days to allow for negotiations.

That blend of military pressure and negotiated surrenders has expanded the regime's control of Daraa province to around 60 percent -- double what it held when it began operations on June 19.

The violence has displaced between 270,000 and 330,000 people, according to the U.N., many south to the border with Jordan or west near the Israeli-occupied Golan Heights.

Both countries have kept their borders closed to those fleeing the violence, despite mounting calls by rights groups to let Syrians escape to safety.

On Wednesday, Human Rights Watch demanded both Jordan and Israel allow asylum-seekers in.

"The abject refusal by Jordanian authorities to allow asylum seekers to seek protection not only goes against their international legal obligations, but against basic human decency," said HRW's Lama Fakih.

Some displaced families whose hometowns had fallen back under regime control have been returning, but even that journey is dangerous.

Eleven members of a single family were killed overnight in a landmine blast as they returned to their hometown of Al-Mseifra, which had "reconciled" with the government, the Observatory said Wednesday.

That brought the number of civilians killed since the offensive began to more than 140, including children.

World powers have criticized the operation for violating a ceasefire announced last year by Washington, Amman and Moscow, but they have not managed to halt the blitz.

The United Nations Security Council will hold a closed-door emergency meeting on Thursday to discuss the offensive.

Jordanian Foreign Minister Ayman Safadi was in Moscow on Wednesday for talks with his Russian counterpart Sergei Lavrov.

Safadi called for a ceasefire in the south, saying the developing situation was of "great importance" to Jordan.

Lavrov, meanwhile, said Moscow was hoping rebels would lay down their weapons.

"We are helping the Syrian army carry out its work with the armed groups, to convince them to sign a reconciliation agreement, drop their arms, and resume a peaceful life," he said.