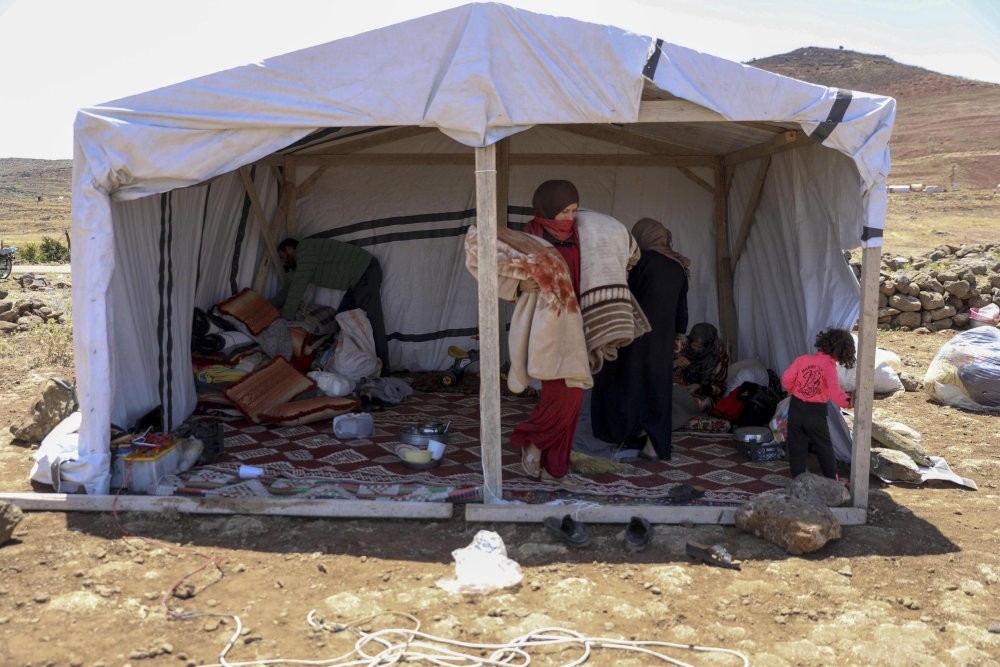 Syrian children bear the brunt of the regime offensive that has triggered the biggest single displacement of the war.
by Compiled from Wire Services Jul 21, 2018 12:00 am

Rights groups slammed the Assad regime for the offensive in southwestern Syria, as around 55,000 children face the risk of death due to growing starvation and lack of aid

An estimated 55,000 Syrian children are cut off from aid and risk starvation after an offensive by Bashar Assad triggered the single biggest displacement of the bloody seven-year war, humanitarian organizations said yesterday.

Regime forces backed by Russian air power have swept through southwestern Syria in the last month in one of the swiftest campaigns of a war estimated to have killed hundreds of thousands of people and displaced 11 million.

The offensive has put an estimated 55,000 children in al-Quneitra province near the border with the Israeli-occupied Golan Heights at risk of death without life-saving aid, said the United Nations children's agency (UNICEF).

"This is life or death for these children; they are being subjected to air strikes, barrel bombs and being cut off from humanitarian aid," said Caroline Anning spokeswoman for the charity Save the Children by phone from Amman, Jordan.

Within the last few weeks the charity has heard of children dying and getting sick from drinking dirty water, dehydration and scorpion and snake bites, Anning told the Thomson Reuters Foundation. The U.N. has warned of a humanitarian catastrophe in the southwest caused by the fighting that erupted after a Russian-backed army offensive to recapture opposition-held southern Syria.

The offensive has triggered the single biggest displacement of the war with 270,000 forced to flee their homes in southwestern Syria as a result of the escalation of fighting this month, according to the U.N. refugee agency (UNHCR).

"What concerns us are the restrictions on the humanitarian access – it is unacceptable," said Juliette Touma, a UNICEF spokeswoman in Amman.

Save the Children and its local partners have given Syrian children identity bracelets in case they are split from their families during these "mass displacements" said Anning.

"It is a really depressing cycle that keeps happening in Syria. We are urging for a ceasefire, for humanitarians to be able to continue their work, and for aid convoys to be able to get in to this area," she said.

Syrian opposition groups started evacuating the border area with the Israeli-occupied Golan Heights on Friday, leaving for opposition-held areas of the north under a surrender deal that will restore Assad's control of the frontier. "We are awaiting the start of the operation and God willing it will happen today," Hammam Dbayat, the governor of al-Quneitra province, told Reuters, as buses prepared to transport out opposition fighters to the northwestern province of Idlib.Reuters footage filmed from the Israeli side of the frontier showed men climbing into trucks piled high with belongings and leaving al-Qahtaniya village at the Golan frontier. It was not clear where they were headed.

Tens of thousands of people have been sheltering at the frontier since the regime offensive began one month ago.

With the Russian-backed offensive closing in, the opposition groups in Quneitra agreed on Thursday to either accept the return of state rule, or leave to Idlib province in the north, echoing terms imposed on defeated opposition groups elsewhere in Syria. Idlib's population has been swollen by Syrians fleeing from Assad's advances elsewhere.

After securing Damascus in May, Assad turned his attention to the opposition in the strategic south where protests against his rule first erupted in 2011.