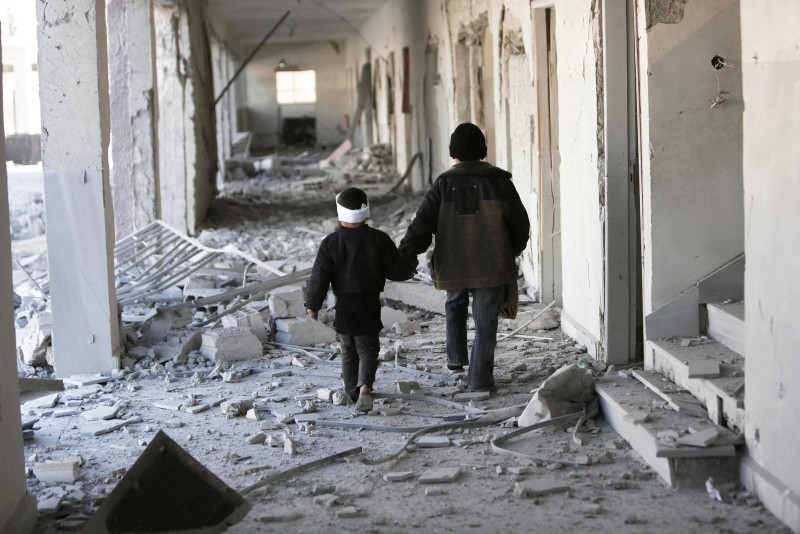 Two children walk through the corridors of a destroyed school in Eastern Ghouta, Syria. (Save the Children via AP)
by Associated Press Jul 27, 2018 12:00 am

The United Nations has verified that more than 7,000 children have lost their lives or been injured in the Syrian conflict since 2013 — and cites unverified reports putting the number "way beyond 20,000," a U.N. envoy said Friday.

Virginia Gamba, the special representative for children in conflict, told the Security Council that since the beginning of 2018, the U.N. has verified over 1,200 violations against children. These include more than 600 children killed or maimed and over 180 recruited or used by Assad forces or armed groups, she said.

"Children continue to be disproportionately affected by the armed conflict in Syria," Gamba said. "The violence Syrian children have been subjected to — and still are — as well as the pain they and their families have faced throughout these years of 'crisis' is simply unacceptable."

"The indiscriminate and disproportionate attacks by all parties, of which the latest tally is 88, including the use of weapons prohibited under international law, aerial attacks, mortars and rockets, indiscriminate shelling and improvised explosive devices, have been used against civilian areas and civilian infrastructures and have had a deadly toll on children," she said.

Gamba said reports attribute most killings and injuries in 2018 to Syrian regime and pro-regime forces, and all recruitment and military use of children to armed groups.

Although figures for the beginning of 2018 include few verified cases of sexual violence and abduction, Gamba said these violations have been reported since 2013. As examples, she cited sexual abuse and exploitation of boys and girls, the sale of children as sexual slaves, rape as a means of torture, and forcible marriage to fighters from the Daesh group.

Gamba said the detention of children for alleged association with armed forces and groups "has exponentially increased."

In 2018 alone, she said over 1,300 children are reportedly being held by parties in northeastern Syria though the U.N. has only been able to verify seven cases because of inaccessibility to the area. Since 2014, she said the U.N. Monitoring and Reporting Mechanism authorized by the Security Council has verified more than 350 cases of detention.

Gamba urged the Security Council to put pressure on all combatants in Syria to immediately take action to prevent child casualties including by halting indiscriminate or disproportionate attacks, ensure that detained children are treated "primarily as victims," and comply with international law.

Syrian children "have been used and abused by, in and for armed conflict for far too long," she said.

"The prolonged exposure to war has immediate and hugely detrimental effects on the psychosocial wellbeing of children," Gamba warned.

She urged the international community to prioritize funding for education at all levels and mental health and protection programs for Syrian children.

"No one must be left behind, especially those that — through no fault of their own — have been robbed of their most important developmental years," Gamba said. "It is time for the children of Syria to believe in their own future and to learn what peace means."