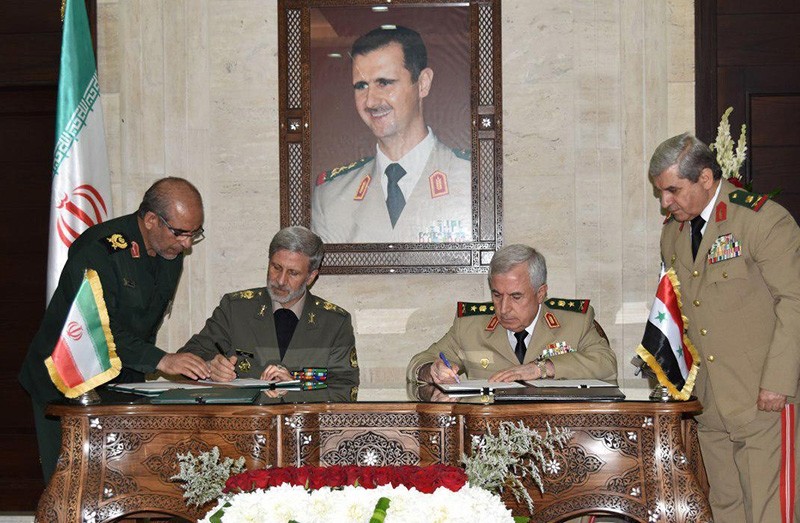 Iran and Syria's Assad regime signed a deal for military cooperation in a meeting between the two defense ministers in Damascus, the Tasnim news agency reported on Monday.

The high-level military delegation headed by Hatami is expected to boost cooperation between the two countries, and Iranian media reported that the leaders were expected to sign new military and defense agreements.

Tasnim did not provide any details about the military cooperation deal.

Iran has provided key support to Assad in the seven-year civil war, sending thousands of military advisers and allied militiamen to bolster his forces.

Hatami said Sunday his country will continue its support of the Syrian regime to ensure improved security in the region, adding that the nature of the two countries' cooperation won't be decided by a "third party."

Israel has expressed concern over Iran's growing influence in Syria, accusing Iran of seeking to establish a foothold near its border. The United States has been pressing for Iran to withdraw its fighters from Syria. In recent meetings between U.S. and Russian officials, President Donald Trump's national security adviser John Bolton said he and Russian officials are discussing the issue, without providing details, calling it a U.S priority.

Iran says its presence in Syria is at the invitation of the Syrian regime. "No third party can affect the presence of Iranian advisers in Syria," Hatami told reporters in Damascus.

Hatami said he hopes Iran can play a "productive role" in Syria's reconstruction, according to Iran's Press TV.

"Iran will spare no effort to maintain Syria's territorial integrity, because security in the country will help (improve) regional stability," Hatami said in a meeting with his Syrian counterpart, General Ali Abdullah Ayyoub, in Damascus on Sunday, according to Press TV. He later met with Assad.

Earlier this year, Israeli jets carried out a number of strikes against suspected Iranian bases in Syria, including an unprecedented bombardment of Iranian military installations in May, reportedly in retaliation to an Iranian rocket barrage on Israeli positions in the occupied Golan Heights.

The two-day visit comes as the Assad regime gears up for an expected offensive in the northern Idlib province, the last major rebel stronghold, which also has a large al-Qaida presence. The province is home to nearly 3 million people and borders Turkey, which fears an offensive may trigger a humanitarian and security catastrophe.

Ayyoub, the Syrian defense minister, said his government is determined to restore government control over Idlib whether through reconciliation deals or with military operations.

A Turkish, Russian and Iranian summit is expected in early September in Tehran to discuss Syria.

Idlib was on top of the agenda during talks between Turkish Foreign Minister Mevlüt Çavuşoğlu and his Russian counterpart Sergey Lavrov in Moscow on Friday. Turkey has sought to delay any offensive, while Russia has expressed growing impatience, accusing insurgents of targeting its forces from the province.

In Lebanon, leader of the pro-Iran Hezbollah militia Hassan Nasrallah said that over the years his group's fighters have never needed encouragement to join the battles in Syria because they knew their significance for the security of Lebanon and the region.

"If we take the decision to take part in a (new) large battle in Syria, our youths will only need a signal because they have devotion and clarity of vision," Nasrallah said. "For seven years we have been fighting, there was no objection, restlessness or annoyance from our base. There was only support."

Nasrallah was speaking on the first anniversary of driving out Daesh terrorists from the rugged mountainous area in Lebanon near the border with Syria.

Nasrallah repeated Russian and Syrian claims that a possible chemical attack is being prepared to be launched in Idlib as a pretext for a new U.S.-backed attack against Syria. He said that pretext is to prevent the Syrian regime from completing the liberation of its territories.

Syria denies it has any chemical weapons left, after giving them up in a Russia-negotiated deal in 2013. Damascus and Moscow accuse rebels and their western allies of staging all subsequent suspected chemical attacks.