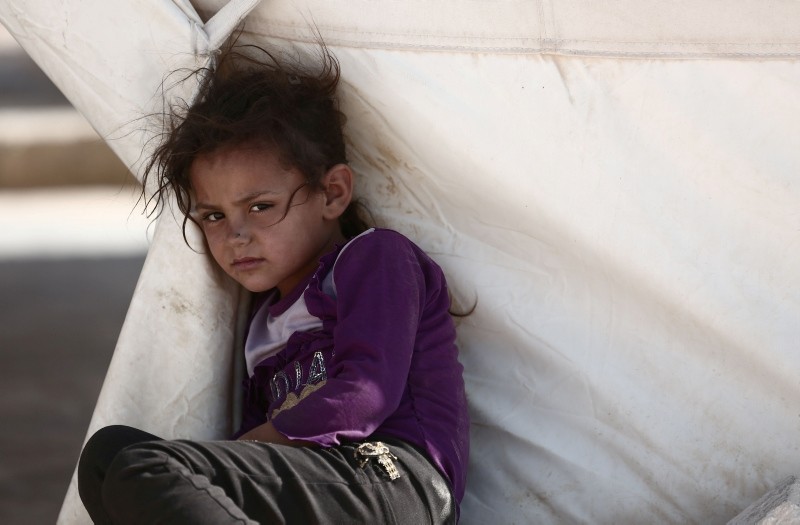 A child is pictured at a camp for the displaced from the opposition-held Syrian province of Idlib, at the village of al-Ghadfa, southeast of the province on September 2, 2018. (AFP Photo)
by Compiled from Wire Services Sep 05, 2018 12:00 am

The presidents of Turkey, Iran and Russia meet Friday in Tehran for a summit expected to shape the future of Idlib province, home to Syria's last major opposition bastion. The summit comes as Syrian forces look poised to launch a major assault that is raising fears of a humanitarian catastrophe on a scale not yet seen in the seven-year-old conflict.

The United Nations and aid groups have warned that a full assault could spark one of the worst disasters of a conflict that has already killed 350,000 people and displaced 11 million in seven years.

Early in the conflict, fighting splintered Syria into a complex patchwork of areas held by rival groups, but fighting in recent years has simplified the frontlines and the country is now split into only a few zones of control. So who controls what in Syria?

At its weakest point in 2015, Bashar Assad's regime controlled less than a fifth of Syria. But since Russia entered the war on its side, it has reclaimed huge swathes of Syria. The regime now holds more than half the country, including its most populous areas, the main cities, the coast, the border with Lebanon, and most of the border with Jordan, as well as the central Syrian desert and the main gas fields.

Opposition groups unsupported by a direct foreign military presence now hold only the northwestern area that comprises most of Idlib province and adjacent small parts of Latakia, Hama and Aleppo provinces. The dominant faction is Tahrir al-Sham, a network spearheaded by al-Qaida's former official Syrian affiliate, previously known as the Nusra Front, and deemed a terrorist group by the United Nations, United States and Turkey.

Turkey has also brought several of the other major opposition groups together into a rival alliance, the National Liberation Front. The area, which borders Turkey, is home to about 3 million people, half of whom have already fled their homes elsewhere, according to the United Nations.

They include more than half a million people from other opposition enclaves who chose to be bused there under surrender deals in recent years rather than go back under Assad's rule. The Turkish army has posted a string of observation posts along the front line between opposition and regime forces.

The PKK terror group's Syrian wing Peoples Protection Units (YPG) took control of large areas of northeast Syria in 2012 as regime forces pulled out to fight the opposition in the west. As Daesh advanced in 2014, the YPG joined other groups to hold them back, supported by the United States. They formed the Syrian Democratic Forces (SDF) dominated by the YPG and backed by the U.S. and its allies.

That area is a big point of friction with Turkey, which sees the YPG and SDF as projections of the PKK group it is fighting at home. Manbij is under the control of a local militia that is affiliated with the SDF, and is the subject of Turkish-U.S. talks.