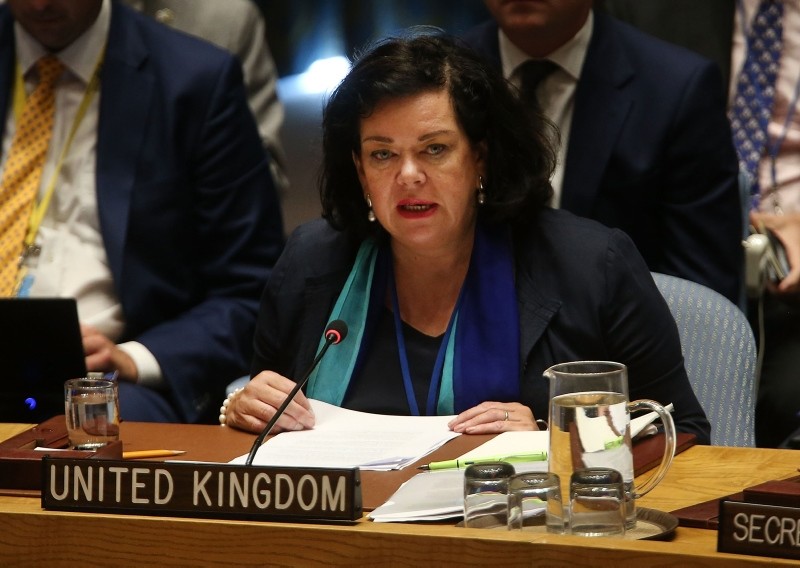 UK envoy Karen Pierce speaks at a U.N. Security Council meeting to officially announce the latest findings behind the poisoning of Russian ex-spy Sergei Skripal and his daughter last March on September 6, 2018 in New York City. (AFP Photo)
by Anadolu Agency Sep 07, 2018 12:00 am

The U.K's. ambassador to the UN warned Friday if civilians are harmed by a military offensive in Idlib, officers and units of Bashar al-Assad's regime would be held accountable.

"We should be crystal clear about this: there are more babies in Idlib than there are terrorists, and I think that should give those engaging in military action pause for thought," Karen Pierce told the UN Security Council.

The Assad regime recently announced plans to launch a major military offensive in the northwestern province of Idlib, which is controlled by various armed opposition groups.

Pierce named several commanders and units of Assad's forces that were said to be stationed around Idlib.

Among them were Gen. Ali Abdullah Ayyoub, the 4th Armored division led by Maher al-Assad, the Republican Guard led by Talal Makhlouf and the Tiger Forces led by Suheil al-Hassan.

Located near the Turkish border, Idlib is home to more than 3 million Syrians, many of whom fled from other cities following attacks by the regime forces.

On Tuesday, UN humanitarian chief Mark Lowcock warned that such an offensive would lead to the "worst humanitarian catastrophe in the 21st century".