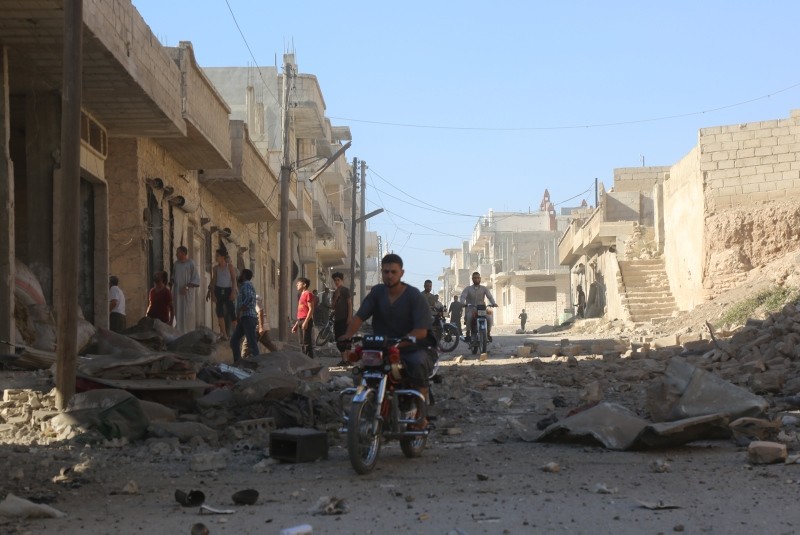 Syrian regime helicopters dropped so-called barrel bombs on civilian homes on the outskirts of the city of Khan Sheikhoun on Sept. 8, 2018. (AA Photo)
by Compiled from Wire Services Sep 08, 2018 12:00 am

Activists and a war monitoring group said Saturday Assad regime and Russian warplanes have targeted the southern edge of Idlib province with a series of airstrikes, ratcheting up the military pressure on the densely populated opposition-held bastion.

The intense air raids come a day after Iran and Russia backed a military campaign in the opposition-held area despite Turkey's pleas for a cease-fire. Turkey has troops and observations points that ring Idlib.

The Britain-based Syrian Observatory for Human Rights reported nearly 60 air raids Saturday in less than three hours on a number of towns and villages in southwestern Idlib and adjacent northern Hama province, an area targeted over the last few days and that overlooks regime-controlled areas.

Schools were shut in Khan Sheikhoun, an area under attack, because of the raids, the Observatory reported.

The Russian strikes were the "most violent" since Damascus and its ally Moscow threatened to attack it around a month ago, the monitor said.

The Russian strikes as well as regime bombardment with barrel bombs killed at least four civilians, including two children and a woman, it added.

The White Helmets, a team of first responders, said it also recorded the four killed in Abdeen. The rescuers said another was killed in Halba, a village further north. The group said one of its already damaged centers has been hit in the wave of airstrikes.

"Airstrikes this morning killed five people, including four people in Abdin village, one in Al-Hulubba," Mustafa Haj Yusuf, the local head of the White Helmets in Idlib said.

At least 26 civilians have been killed and dozens injured in airstrikes and attacks by regime forces and Russian warplanes in Idlib and Hama since the beginning of this month, according to the White Helmets.

Syrian regime helicopters dropped so-called barrel bombs -- containers filled with explosive material -- on civilian homes on the outskirts of the city of Khan Sheikhoun, two residents of the area in southern Idlib said.

President Recep Tayyip Erdoğan pushed for a cease-fire during the summit but Russian President Vladimir Putin said a truce would be pointless as it would not involve militant groups Assad and his allies deem as terrorists.

Erdoğan said "resorting to methods, which disregard civilian lives, would only play into the hands of terrorists," warning against "any faits accomplis under the pretext of fighting terrorism."

"If the world turns a blind eye to the killing of tens of thousands of innocent people to further the regime's interests, we will neither watch from the sidelines nor participate in such a game," Erdoğan said in a series of tweets late Friday, hours after the summit ended.

Tehran and Moscow have helped Assad turn the course of the war against an array of opponents ranging from Western-backed opposition forces to the militants, while Turkey is a leading opposition supporter.

The United Nations fears a full-scale offensive could cause a humanitarian catastrophe involving tens of thousands of civilians.

More than 350,000 people have been killed and millions displaced since Syria's civil war started in 2011 with the brutal repression of anti-Assad protests.

Idlib is home to some 3 million people and a regime offensive may trigger a new wave of displacement, driving refugees to Turkey which is already hosting more than 3.5 million Syrians.