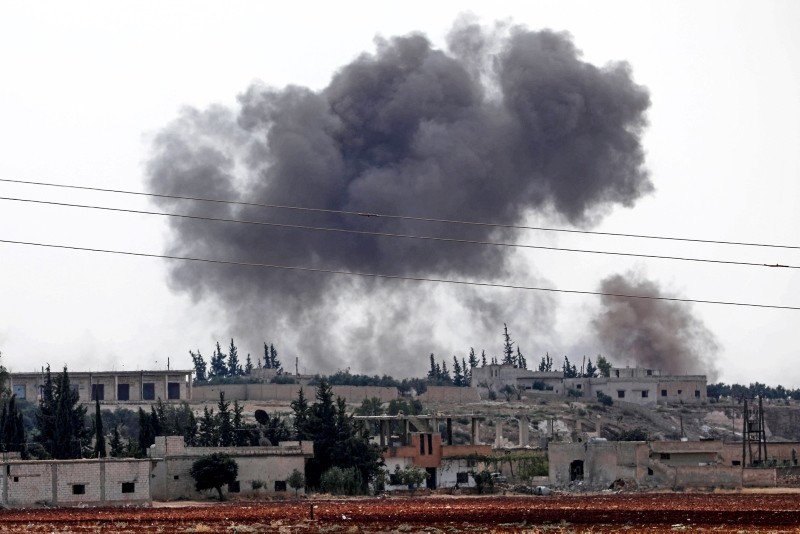 Smoke billows following Assad regime forces' bombardment around the town of Al Habit on the southern edges of the rebel-held Idlib province on Sept. 9, 2018. (AFP Photo)
by Daily Sabah with DPA Sep 09, 2018 12:00 am

The attacks, which ended a 17-hour lull, came amid mounting fears that forces of Bashar al-Assad, supported by Russia, will soon launch a final offensive to regain Idlib, which has been under the rebels' control since 2015.

Sunday's bombing targeted the southern section of Idlib and the northern countryside of neighboring Hama province, the Syrian Observatory for Human Rights said.

The bombardment in the past two days has prompted more than 5,000 people to flee Idlib for safer areas in the province's northern countryside and the north-western rural part of Aleppo province, the Observatory said.

In today's airstrikes, Telass, Abdin, Latamnah, Habit and Kafr Zita villages located in southern Idlib countryside were targeted, Dogan News Agency reported. Two people were killed and numerous others were injured in the bombardment that caused panic among the locals. A field hospital in Latamnah was also struck with a barrel bomb and heavily damaged.

Violence in the region also caused locals from villages in the countryside between Idlib and Hama leave their houses to seek refuge in Jisr al-Shougour, Idlib and Hama.

The area, also known as the Ghab Plain, is the main source of food for Idlib and its surrounding region and is expected to be the first target of the Assad regime during an attack to the province.

Sunday's violence came two days after Russia, Iran and Turkey held a summit in Tehran to discuss the fate of Idlib.

A call at the summit for a ceasefire in Idlib, made by Turkish President Recep Tayyip Erdoğan, was rejected by Russian President Vladimir Putin and Iranian President Hassan Rowhani, who maintain the province is inhabited by "terrorists."

Russia and Iran are key allies of al-Assad, while Turkey supports the opposition.

Idlib is largely controlled by al-Qaida affiliated Hayat Tahrir al-Sham terrorist group. It also has a population of 3 million civilians, a third of whom have already been internally displaced by Syria's seven-year conflict.

During a visit to Syrian Turkmen refugees in Turkey's southernmost district of Yayladağı bordering regime-controlled Latakia and opposition-held Idlib provinces, Interior Minister Süleyman Soylu said that more than 255,000 Syrian refugees have returned to their homeland in the past two years. Soylu noted the effectiveness of Euphrates Shield and Olive Branch operations - launched in Aug. 2016 and Sept. 2017, respectively, against Daesh and PKK/YPG terrorist groups in northern Syria - in restoring peace and calm in the region.