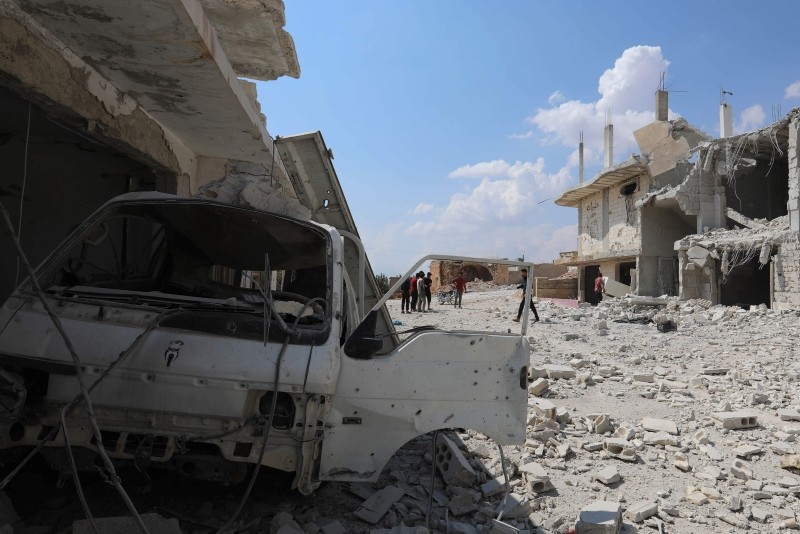 This picture shows the destructions after regime forces' bombings in the town of Al Habit on the southern edges of Idlib on September 9, 2018. (AFP Photo)
by Compiled from Wire Services Sep 10, 2018 12:00 am

More than 30,000 people have fled their homes in northwest Syria's Idlib since Bashad Assad regime and allied forces resumed air and ground bombardments there last week, a United Nations official said on Monday.

Assad forces, backed by Russia and Iran, has been preparing a major assault to recover Idlib and adjacent areas of northwest Syria. The area is the last major stronghold of active opposition to Bashar Assad.

Russian and Syrian warplanes resumed their bombing campaign last week and the presidents of Turkey, Iran and Russia on Friday failed to agree on a ceasefire that would forestall the offensive.

A trilateral summit of the presidents of Turkey, Russia and Iran on Friday underlined that "there could be no military solution to the Syrian conflict" and called for advancing the political process to reach a negotiated solution.

At least 29 civilians have been killed and dozens injured in airstrikes and attacks by regime forces and Russian warplanes in Idlib and Hama since the beginning of this month, according to White Helmets.

Also on Monday, the U.N.'s emergency coordinator said an all-out military assault on Idlib could provoke the worst humanitarian catastrophe of the 21st Century and must be averted.

David Swanson, spokesman for the U.N. Office for the Coordination of Humanitarian Affairs, said that as of Sunday, 30,542 people have been displaced from northwest Syria, moving to different areas across Idlib.

About 2.9 million people live in the opposition-held area, which comprises most of Idlib province and adjacent small parts of Latakia, Hama and Aleppo provinces.

U.N.'s emergency coordinator Mark Lowcock said some 800,000 of those could flee their current homes in an exodus sparked by a major battle.

He said 47 percent of those displaced have moved to camps, 29 percent are staying with families, 14 percent have settled in informal camps and 10 percent are in rented accommodation.

Abu al-Baraa al-Hamawi, an opposition leader in northern Hama, said about 95 percent of people had left a number of villages in northern and western Hama province and in southern Idlib province in the last three days due to intensive air strikes.

"We are very actively preparing for the possibility that civilians move in huge numbers in multiple directions," Lowcock told a news briefing in Geneva.

"There needs to be ways of dealing with this problem that don't turn the next few months in Idlib into the worst humanitarian catastrophe with the biggest loss of life of the 21st Century," he said.

Christy Delafield of Mercy Corps, one of the largest organizations delivering aid in Syria, said it has been hard for aid workers and communities to keep up with the displacement.

"There is a lack of water storage capacity in many of the areas in which we operate, with just two or three days worth of water available to civilians," she told Reuters.

"The crossing points along the front lines between the government and opposition controlled areas have been closed, and as a result, food prices have dramatically increased."

U.N. Special Envoy Staffan de Mistura began two days of talks in Geneva on Monday with senior officials from Russia, Iran and Turkey on forming a Constitutional Committee in Syria, but which were expected to be overshadowed by the Idlib crisis.

Tehran and Moscow have helped Assad turn the course of the war against an array of opponents ranging from Western-backed opposition to terrorist militants, while Turkey is a leading opposition supporter and has troops in the country.

More than half a million people have been killed and 11 million forced to flee their homes in the seven-year-old war.