We can’t leave Syrians in Idlib to Assad's mercy, world must stop him, Erdoğan says 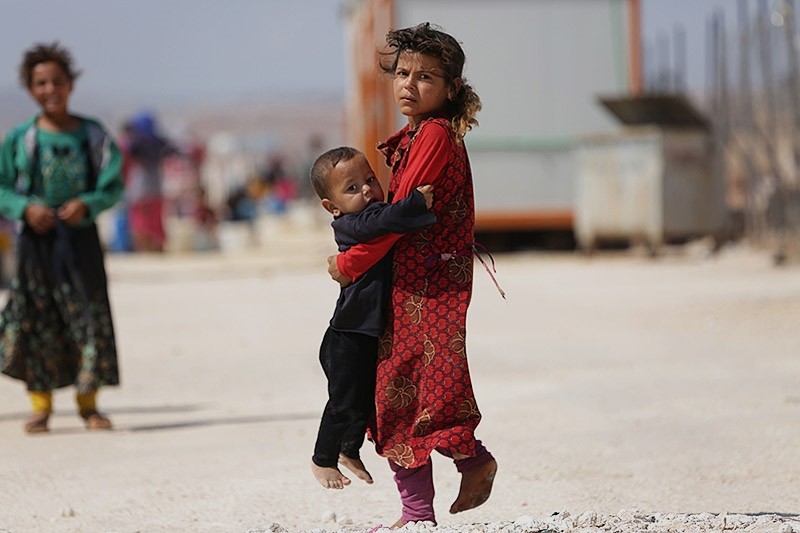 Children who fled Syria's Idlib province are pictured at a camp in Kafr Lusin near the border with Turkey in the northern part of the province on September 9, 2018. (AFP Photo)
by Daily Sabah Sep 11, 2018 12:00 am

The world cannot leave Syrian people to the mercy of Bashar Assad as his regime only seeks to wipe out its opposition in Idlib with its latest offensive, President Recep Tayyip Erdoğan said in an opinion piece to Wall Street Journal published on Monday.

Pointing out that the regime's indiscriminate attacks are "not a genuine or effective campaign against terrorism," Erdoğan once again highlighted the importance of a complete cease-fire in the region.

"Today we find ourselves at a critical juncture again, as the Assad regime, with the help of its allies, prepares to launch a massive offensive against Idlib, which is home to some three million people and one of the few remaining safe havens for internally displaced Syrians," he said, adding that the Turkish government "contributed to the creation of a deconfliction zone" and also set up 12 observation posts to document and report cease-fire violations.

Further noting that Bashar Assad is trying to legitimize the planned Idlib offensive on counterterrorism grounds, he added that the extremists make just a fraction of the city's population. "Certain designated terrorist organizations, including Hayat Tahrir al-Sham, remain active in this area. Yet those fighters account for a fraction of Idlib's population. In order to eliminate terrorist and extremist elements in Idlib and to bring to justice foreign fighters, a more comprehensive international counterterrorism operation is necessary," he said.

Praising the moderate opposition for their contributions to Turkish campaigns in northern Syria against Daesh and PKK terrorist groups, Erdoğan added that Turkey has carried out operations without harming or displacing civilians, and the same principle should also be followed should there be an operation against extremist elements in Idlib.

"Turkey's ability to maintain order in northern Syria is proof that a responsible approach to counterterrorism can win hearts and minds."

Also emphasizing Turkey's efforts, "Turkey has gone to extraordinary lengths to alleviate suffering of the Syrian people, hosting some 3.5 million refugees—more than any other country in the world," he added.

"Idlib is the last exit before the toll. If the international community, including Europe and the U.S., fail to take action now, not only innocent Syrians but the entire world stands to pay the price.

"Turkey has done everything in its power to stop the bloodshed next door. To ensure that we succeed, the rest of the world must set aside narrow self-interest and throw its weight behind a political solution," he concluded.