Coalition airstrikes have killed over 3,000 civilians in Syria: NGO 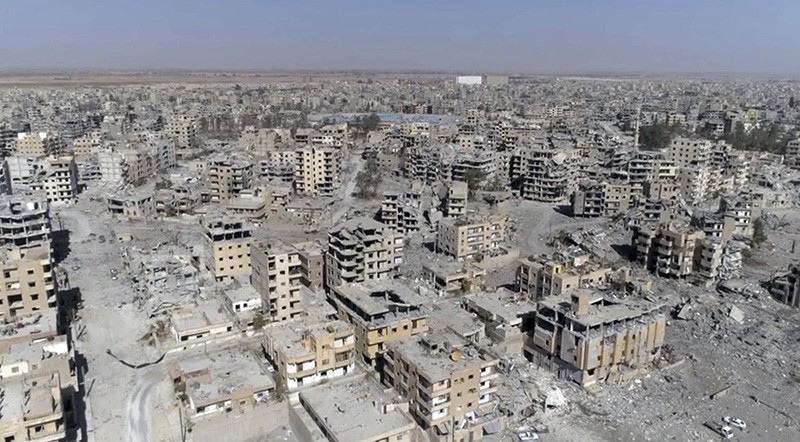 More than 3,000 civilians have been killed in U.S.-led coalition airstrikes against the Daesh terror group in Syria since they began four years ago, a monitor said on Sunday.

The Washington-led alliance puts the toll at just over 1,000 civilians in both Syria and neighboring Iraq, and says it does all it can to prevent civilian deaths.

The coalition began bombing Daesh targets in Iraq in August 2014 after the terrorist group seized swathes of territory straddling the two countries, proclaiming a "caliphate."

The Syrian Observatory for Human Rights, a Britain-based monitoring group, said on Sunday those Syria strikes had since killed 3,331 civilians.

The monitor relies on a network of sources inside Syria and tracks flight patterns, aircraft involved and ammunition used to determine who carries out raids.

"Among those killed are 826 children and 615 women," said Observatory chief Rami Abdel Rahman.

The coalition says it takes every possible precaution to prevent civilian deaths.

In its latest civilian casualty report published last month, the coalition said its strikes had unintentionally killed 1,061 civilians in both Iraq and Syria up until July 30, 2018.

It is still assessing a further 216 reports of civilian casualties, some of them in strikes dating back to 2014.

Asked if the coalition could specify how many of the confirmed casualties were in Syria, spokesman Sean Ryan said it "does not breakdown strikes by type, platform, munition, region or nation."

"As far any discrepancy in numbers, the coalition is basing the findings on facts and evidence. We are not claiming to provide exact numbers, but saying it is based on the best available evidence," he told AFP.

Ryan said the coalition remained willing to work with anyone to investigate allegations and asked other monitors to share what metrics they were using to determine casualties.

Rights groups have criticized the coalition for not pursuing investigations of civilian casualties rigorously enough.

Breaking down the death toll by provinces in Syria, the largest number of casualties took place in Raqqa, with 1,133.

"The artificially low number of civilian casualties the coalition acknowledges stems in part from poor investigation procedures that fail even to involve on-the-ground research," it said at the time.

The coalition's operations have largely wound down, with the terrorists ousted from all but tiny bits of territory in Syria.

More than 360,000 people have been killed across Syria since the conflict broke out in 2011, nearly a third of them civilians, according to the Observatory.