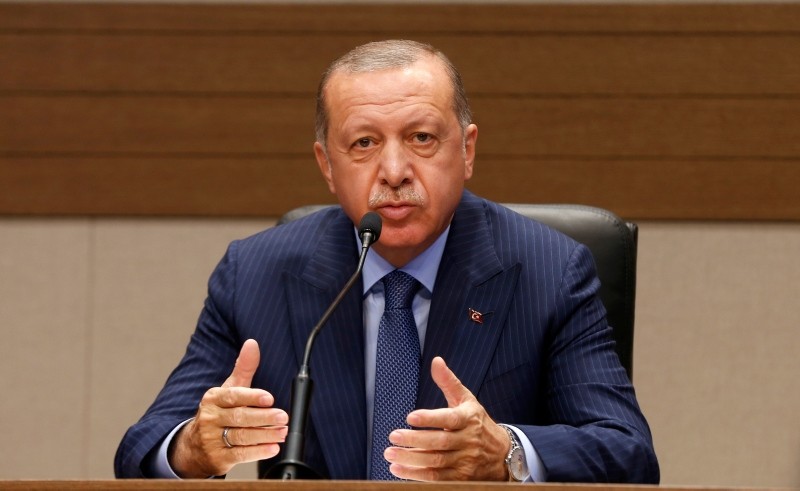 Terrorist elements located to the east of the Euphrates is a major problem in Syria, President Erdoğan said, referring to the U.S.-backed YPG. He urged the international community to take steps to liberate the region from the terrorist group

The biggest problem for the future of Syria is the "terror swamp" that is "expanding under the auspices of some of our allies east of the Euphrates River," President Recep Tayyip Erdoğan said yesterday. The president urged the international community to take steps to liberate the region from terrorist elements at a press conference ahead of his visit to New York for the U.N. General Assembly. "While steps are being taken for a political solution to the Syrian crisis, some other steps should be taken to dry out this swamp as well," Erdoğan added.

He was referring to the United States' backing of the PKK-affiliated People's Protection Units (YPG) in northern Syria, which has long caused tension between the two NATO allies. Ankara has been criticizing the Pentagon's delivery of a huge amount of military supplies to the group since 2014 under the pretext of fighting Daesh. While the PKK is internationally recognized as a terror group, Washington refuses to include its Syrian affiliate on its terror list, despite strong ideological and structural links.

Underscoring that no country has been more affected by the Syrian civil war than Turkey, Erdoğan said that the Sochi deal signed with Russia last week over the northwestern Syrian province of Idlib relieved not only the region but also Turkey."We will [continue to] take the most beneficial and accurate steps as soon as possible to provide peace in the region," Erdoğan stated, while adding that they are still working on the details of the deal.

The 10-article memorandum of the Sochi deal suggests that the Idlib demilitarized area will be preserved, while Turkish observation posts will be fortified and continue to function. The Russian Federation will also take all the necessary measures to ensure that military operations and attacks on Idlib are being avoided and the existing status quo will be maintained. In addition to this, transit traffic on the M4 (Aleppo-Latakia) and M5 (Aleppo-Hama) routes, which have been closed for many years due to the civil war, will be restored by the end of 2018.

The National Defense Ministry announced on Friday that the borders of the planned demilitarized zone in Idlib were determined in a meeting that was held this week with a Russian delegation. In a statement, the ministry said that the border was determined by paying regard to the geographical structure and features of settlements in the region.

Foreign Minister Mevlüt Çavuşoğlu also said on Friday that another trilateral meeting on Syria will be held in New York with Russia and Iran's foreign ministers.

"In the wake of the Sochi agreement, a cease-fire must be fully established and focus should be on political solutions," he added.

Indicating that it would not be easy for Turkey to welcome another refugee flow that might have emerged following a Syrian regime offensive in Idlib, Erdoğan reiterated his contentment with the deal.

According to the agreement, civilians and the moderate opposition will continue to remain in the region; however, all terrorist groups will be cleared, while laying down their arms at the same time. Located near the Turkish border, the province of Idlib is home to more than 3.5 million Syrians, many of whom fled from other cities following attacks by regime forces. The ongoing seven-year conflict in Syria has fueled mass refugee migration to Turkey, which hosts over 3 million Syrians. The conflict in Syria has killed more than 500,000 people and forced more than 5 million people to flee, while some 7 million remain internally displaced. Refugees mainly took shelter in Turkey, Jordan and Lebanon, with Turkey hosting the largest number of Syrian refugees.

The largest armed opposition group in Syria, the National Liberation Front (NLF), announced its support of the agreement between Turkey and Russia on Idlib province. In a written statement issued via their social media accounts, the NLF said, "We thank the Turkish President Recep Tayyip Erdoğan for his hard efforts and persistent work on preventing this war."

Underscoring that the outcome of the Sochi discussions was an "obvious victory for Turkish diplomacy," the statement further added that the group "will not give up on its goal to overthrow the Bashar Assad regime."

"We announce our full cooperation with our Turkish ally in their efforts… We will also be aware and cautious for any treachery by the Russians, the regime and the Iranians," the statement said.

While the moderate opposition supports the deal, the terrorist groups in the region started to express their disturbance over it. Huras al-Din, a faction in Idlib, rejected the Sochi deal, Reuters reported yesterday.

While the Huras al-Din faction is not the main terrorist group in Idlib, according to Reuters, its statement points to objections from other, bigger terrorist groups like Tahrir al-Sham, which did not declare its stance on the deal yet.

The group declared the agreement part of a plan "to eliminate the jihadist project" in the region.

Although during the Astana process – launched by Russia, Iran, and Turkey in January 2017 with the aim of bringing all warring parties in the Syrian conflict to the table to facilitate U.N. sponsored peace talks in Geneva – Idlib was declared a de-escalation zone, in which Turkey established 12 checkpoints to monitor the cease-fire agreement, the Syrian regime announced its plans to launch a major military offensive in the region last month.

Almost immediately, the U.N. issued a warning that such an offensive would lead to the "worst humanitarian catastrophe in the 21st century."