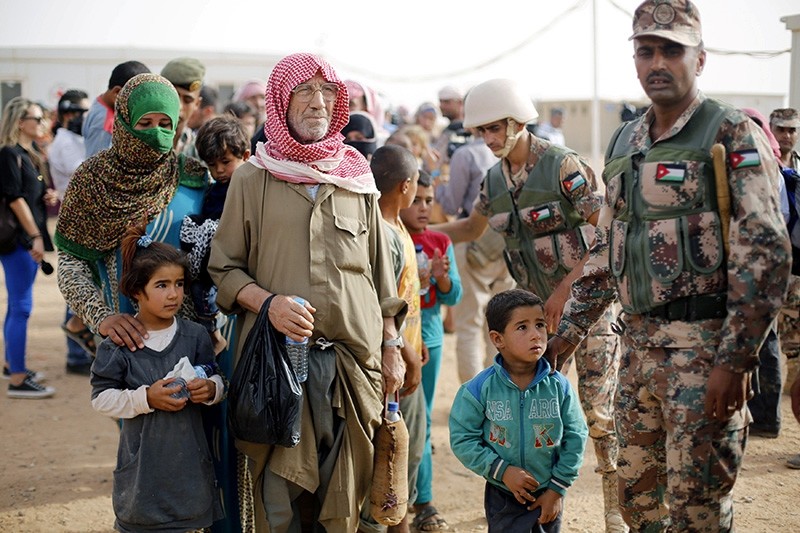 Syrian refugees wait to board a Jordanian army vehicle after crossing into Jordanian territory with their families, in Al Ruqban border area, near the northeastern Jordanian border with Syria on Sept. 10, 2015. (Reuters Photo)
by Compiled from Wire Services
Oct 14, 2018 12:00 am

The Assad regime retook the area around the border crossing at Naseeb in July during a weekslong Russian-backed offensive to drive opposition groups from their stronghold in southwest Syria.

Technical teams from the two countries met on the Jordanian side on Sunday and agreed on the final arrangements to open the crossing from Oct. 15, said Jordanian government spokeswoman Jumana Ghunaimat.

However, although the crossing officially opened Monday, it will not open to normal traffic just yet, said Nael Husami, head of the Amman chamber of industry.

Syrian state television also cited Interior Minister Mohammed al-Shaar as saying the border crossing and roads leading to it were being renovated.

Syria's only other normally operating border is with Lebanon. Its frontier with Turkey is only open into opposition-held areas, and its crossing with Iraq is only open for government or military uses.

The reopening of the crossings is a major boost to the Assad regime, keen on sending messages to its citizens and the world that it is slowly emerging victorious from the bloody conflict and beginning to restore vital services and relations. In eastern Syria, state TV said its broadcast has returned to Deir el-Zour city, seven years after it was halted when armed groups seized control of the area.

Reopening the crossing with Jordan would bring major relief to Bashar Assad's government by restoring a much-needed gateway for Syrian exports to Arab countries. It is also expected to boost its coffers as the government is expected to collect transit fees from convoys coming from Jordan. Last month, it hiked fees for all trailers transiting through its territories.

The resumption of commercial trade through the crossing will also be a diplomatic victory for Assad, whose regime has been isolated from its Arab neighbors since the war began in 2011.

Arab countries have boycotted the regime since the early days of the war, freezing its membership in the 22-member state Arab League.

"The Naseeb crossing is a vital lifeline for trade between the two brotherly countries Jordan and Syria through them to other Arab countries," Ghunaimat said, according to Petra.

Opposition groups seized the crossing in 2015, disrupting a major trade route between Syria and Jordan, Lebanon and oil-rich Gulf countries.

The two governments had earlier issued conflicting reports of when the crossing would open.

Regime troops recaptured it in July this year after rebels reached an agreement with Russian mediators to end the violence in the southern province of Daraa and surrender the crossing.

The crossing is also vital for Syria's neighboring Lebanon, providing its agricultural products a route to foreign markets.

The recapture of Naseeb crossing marked a major victory for Assad's forces, which have been on a winning streak since 2015 when Russia threw its military weight behind Damascus. The victory in southern Syria signaled the return of his forces to Daraa province where the uprising against him began seven years ago.

Fighting has subsided across most of Syria, but in the absence of a political deal, more than 40 percent of the country's territory remains in the hands of armed opposition and their foreign supporters

On Sunday, Israel's military announced that the United Nations has decided to return its peacekeeping force, known as UNDOF, to the Quneitra crossing area. The crossing will be used exclusively for U.N. forces, it added.

The Assad regime plans to escort media to the crossing Monday.

Regime forces recaptured the Quneitra area in July. Russian military police deployed in the area, including on the edge of the Israeli-occupied Golan Heights, setting up checkpoints in the area. Moscow said it planned to work closely with the U.N. force.

Israel captured the Golan Heights in the 1967 war. The UNDOF deployed in the area in 1974.