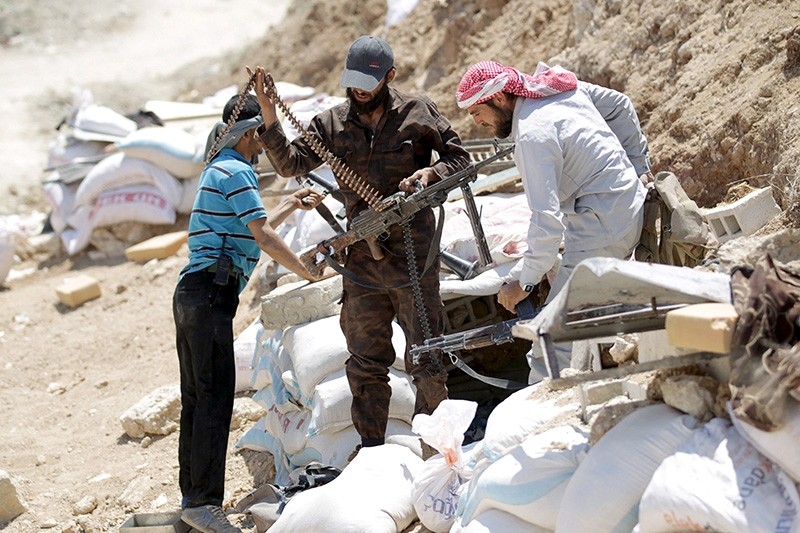 Rebel fighters from the Ahrar al-Sham extremist group prepare their weapons in Jabal al-Arbaeen, which overlooks the northern town of Ariha, one of the last government strongholds in the Idlib province May 26, 2015. (Reuters Photo)
by Daily Sabah with Agencies
Oct 15, 2018 12:00 am

Syria's main extremist group signaled Sunday it would abide by the terms of a Russian-Turkish deal to prevent an Assad regime offensive on opposition-held Idlib the day before a critical deadline.

Tahrir al-Sham, an extremist alliance spearheaded by al-Qaida's former Syrian affiliate previously known as the Nusra Front, said it had adopted its stance after taking time for "consultation."

Although it did not explicitly say it would abide by the deal, it said it would seek to provide security for people in the area it controls and that it appreciated efforts to protect that area, an apparent reference to Turkey.

"We value the efforts of all those striving — at home and abroad — to protect the liberated area and prevent its invasion and the perpetration of massacres in it," Tahrir al-Sham said in its statement.

"But we warn at the same time against the trickery of the Russian occupier or having faith in its intentions," it added.

The group also said it "would not forget" the foreign fighters who came to assist it.

However, the Syrian Observatory for Human Rights noted that the deadline for extremists to leave the planned buffer zone around Idlib passed Monday without any sign they had done so.

The Britain-based war monitor said there had been no visible withdrawal from the buffer by midnight, as an opposition source confirmed the deadline had passed.

Idlib's other main opposition faction, a Turkish-aligned alliance of groups known as the National Liberation Front, has already expressed its support for the agreement.

The deal sets up a demilitarized zone running 15-20 km (9-13 miles) deep into opposition territory that must be evacuated of all heavy weapons and all extremist groups by Monday, Oct. 15.

Turkey has been working to persuade Tahrir al-Sham to comply with the agreement, which it arranged with the Assad regime's main ally Russia to avert an assault that it feared would send a new wave of refugees toward its border.

However, Tahrir al-Sham also said in its statement, issued via its social media channels, that it would not end its armed struggle or hand over its weapons.

Tahrir al-Sham is the most powerful terrorist alliance in Idlib, the last major opposition-controlled enclave outside Bashar Assad's control.

Idlib is also home to an estimated 3 million people, more than half of whom have already been displaced at least once during the war.