Some militants withdrawing from Syria's Idlib, US envoy Jeffrey says in Ankara 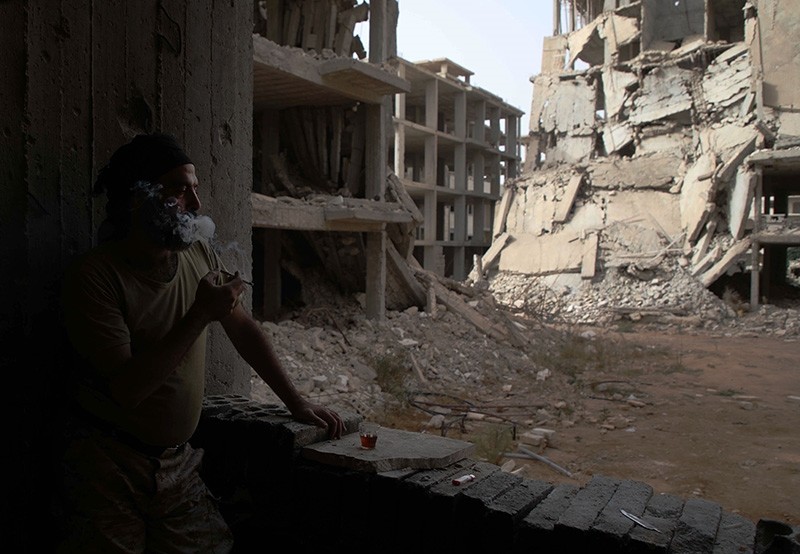 A Syrian opposition-fighter from the National Liberation Front (NLF) stares at a damaged street in the opposition-held al-Rashidin district of western Aleppo's countryside near Idlib province, on Oct. 15, 2018. (AFP Photo)
by Daily Sabah with Reuters
Oct 17, 2018 12:00 am

Some militants have withdrawn from the demilitarization zone in Idlib following a deal between Russia and Turkey on the northwestern Syrian region, a U.S. envoy James Jeffrey said Wednesday after arriving in Ankara.

"The withdrawal of heavy weapons is complete by all accounts," Jeffrey, the U.S. special representative for Syria engagement, told reporters in Ankara during a brief visit with the U.S. secretary of state. "There is some question as to whether everybody from (Hayat Tahrir al-Sham) has left."

"Most of them are part of the opposition that we used to work with and the Turks still do," he said. He estimated that between 7,000-10,000 are extremists.

Turkey and Russia reached a deal to set up a buffer zone running 15-20 km (9-13 miles) deep into opposition-held territory that had to be evacuated of all heavy weapons and all extremists by Monday. Hayat Tahrir al-Sham (HTS), an alliance spearheaded by al-Qaeda's former Syrian affiliate Nusra Front, is the most powerful extremist alliance in the region.

Approximately 40 percent of the country does not fall under the control of Assad's government, Jeffrey added.

Idlib and adjacent areas are the last stronghold of opposition groups who rose up against Bashar Assad in 2011. The area is also home to an estimated 3 million people, more than half of whom have already been displaced at least once during the war.

Turkey and the United States hold regular coordinated patrols in northern Syria's Manbij area, where the PKK-affiliated People's Protection Units (YPG) militia has a presence. President Recep Tayyip Erdoğan has warned that Ankara "will do what is necessary" to ensure the YPG leaves Manbij as per the agreement with the United States.

Erdoğan told U.S. Secretary of State Mike Pompeo that Turkey could easily clear the town if the United States failed to do so, Foreign Minister Mevlüt Çavuşoğlu said on Wednesday.

Jeffrey said the negotiations between Pompeo and Çavuşoğlu are now being carried out and that the United States has troops in Turkey training with Turkish troops to carry out joint patrols around Manbij.

Jeffrey is making his first stop in Turkey on a regional tour including Qatar and Saudi Arabia which will run through Oct. 23.

A statement Monday by the U.S. State Department said Jeffrey's trip is "for discussions with allies and partners about Syria," including the war-torn country's political process.

Jeffrey, the former United States ambassador to Turkey, was appointed and sworn in as Washington's Special Representative for Syria Engagement in August. Ankara has expressed approval for the appointment.

Jeffrey served as the U.S. ambassador in Ankara from 2008 to 2010. He has often criticized the U.S. arms support to the YPG, particularly regarding Ankara's concerns over the terror group.