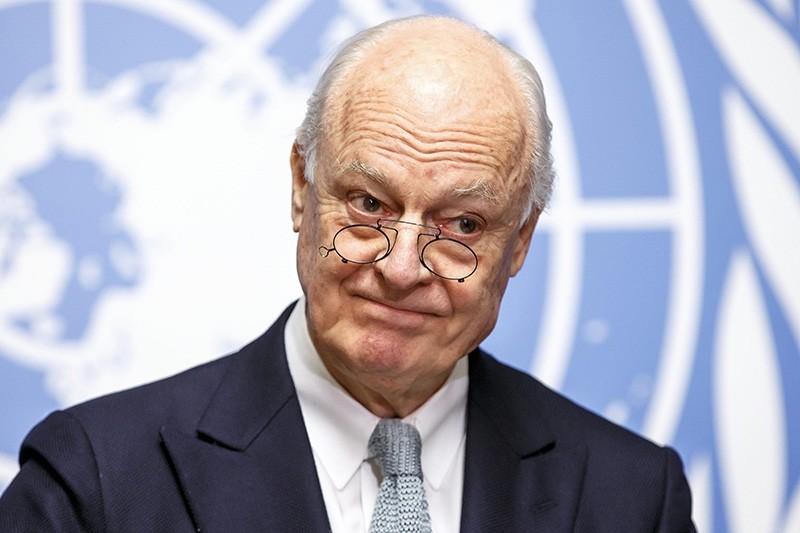 U.N. Special Envoy of the Secretary-General for Syria Staffan de Mistura informs the media on the Intra-Syrian Talks, during a press conference, at the European headquarters of the United Nations in Geneva, Switzerland, Jan. 25, 2016. (AP Photo)
by French Press Agency - AFP
Oct 17, 2018 12:00 am

The U.N. envoy for Syria, Staffan de Mistura, on Wednesday announced he will step down at the end of November after more than four years in the key post.

"I will myself be moving as of the last week of November," De Mistura told the U.N. Security Council during a meeting on the crisis in Syria.

The Italian-Swedish diplomat, who became the U.N.'s third Syria envoy in July 2014, said he was leaving for "purely personal reasons" and had discussed his plans to leave with U.N. Secretary-General Antonio Guterres.

"I am not laying down the charge until the last hour of the last day of my mandate," he said.

De Mistura will be traveling to Damascus next week to push for the creation of a committee to agree on a post-war constitution for Syria.

Syria is resisting the U.N.-led effort to set up the constitutional committee that will be comprised of regime officials, opposition members and representatives of civil society.

More than 360,000 people have died in the war in Syria, which began in March 2011 as an uprising against Bashar Assad but has since morphed into a complex war with myriad armed groups, some of which have foreign backing.