Erdoğan-Trump call resulted in US withdrawal from Syria: US official 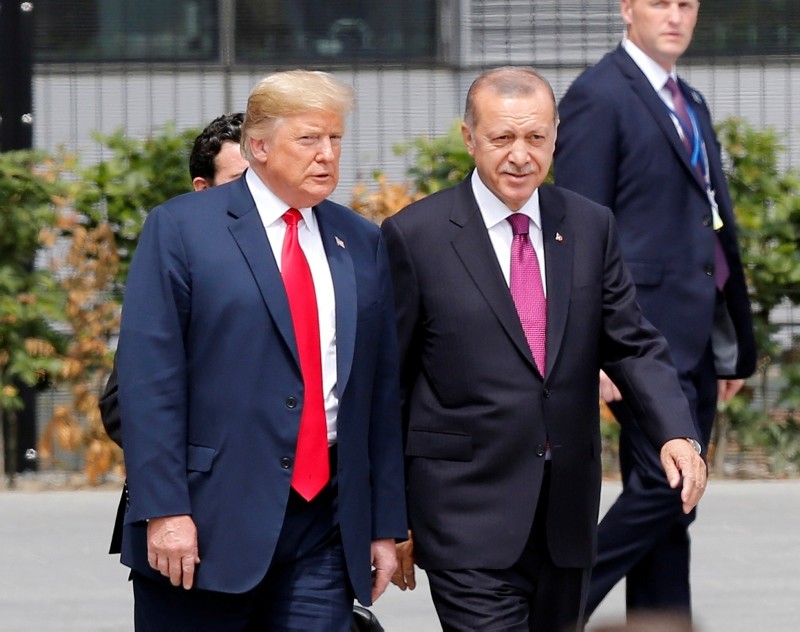 Washington's decision to pull troops out of Syria has come after a phone call between President Recep Tayyip Erdoğan and his U.S. counterpart Donald Trump, Reuters reported late Wednesday citing a U.S. official.

"Everything that has followed is implementing the agreement that was made in that call," he said.

The time frame for U.S troop pullout from the country is expected to be between 60 to 100 days, the official added.

"All U.S. military forces will be pulled out once final stages of last operation against ISIS is complete," the official was also quoted as saying by the agency, using an alternate acronym for Daesh terrorist group.

"All U.S. State Department personnel are being evacuated from Syria within 24 hours."

The White House said later Wednesday that Trump had informed Erdoğan of the decision to withdraw troops. The presidents talk on the phone frequently, it added.

Trump claimed earlier in the day that the United States has defeated Daesh terrorist group in Syria, adding that it was the only reason he had kept troops in the country.

"We have defeated ISIS (Daesh) in Syria, my only reason for being there during the Trump Presidency," Trump wrote on Twitter.

The decision to withdrawal all troops, if confirmed, would upend assumptions about a longer-term U.S. military presence in Syria, which U.S. Defense Secretary Jim Mattis and other senior U.S. officials had advocated to help ensure Daesh cannot re-emerge.

Republican Senator Lindsey Graham, a frequent defender of the president, however, wasn't as welcoming of Trump's decision as usual.

"An American withdrawal at this time would be a big win for Daesh, Iran, Bashar Assad of Syria, and Russia. I fear it will lead to devastating consequences for our nation, the region, and throughout the world," Graham said in a statement, calling the move a "mistake."

The withdrawal will complicate recruiting future partners willing to fight extremism, he said, adding "It will also be seen by Iran and other bad actors as a sign of American weakness in the efforts to contain Iranian expansion."

Trump had previously expressed his willingness to withdraw U.S. troops from Syria in April, yet no concrete steps were taken since.

"I want to get out. I want to bring our troops back home," Trump said during a multilateral news conference with the leaders of Latvia, Lithuania and Estonia in early April.

The report claiming that the U.S. is considering withdrawing its troops from Syria came nearly a week after Erdoğan announced that Turkey will soon conduct a cross-border operation to liberate areas controlled by PKK terrorist organization's Syrian affiliate People's Protection Units (YPG) in Syria.

It has been reported that the U.S. still has about 2,000 troops in Syria, many of whom working in close cooperation with Syrian Democratic Forces (SDF) which is dominated by the YPG.

The Kremlin has long voiced concern over Washington's continuous support for the YPG, saying the United States is using Daesh as an excuse to prolong its presence in Syria, which is "illegal." Russian Minister of Foreign Affairs Sergey Lavrov stressed in September at the U.N. General Assembly that the U.S. is hindering reaching a political settlement to the crisis, serving the interests of terrorists that are trying to spread chaos in the country.

Also, Russia's Foreign Ministry said on Wednesday that the presence of U.S. forces in Syria was becoming a dangerous obstacle to finding a peace settlement and accused Washington of keeping its forces there illegally.

"From being a factor in the fight against terrorism, the illegal American presence in Syria is becoming a dangerous obstacle to the path to a settlement," Foreign Ministry spokeswoman Maria Zakharova told a news briefing.

Iran and the Assad regime also have expressed their opposition to the presence of hundreds of the U.S. troops in the southeastern part of the country close to the border with Iraq, citing the deployment as "illegal" and an "act of aggression."