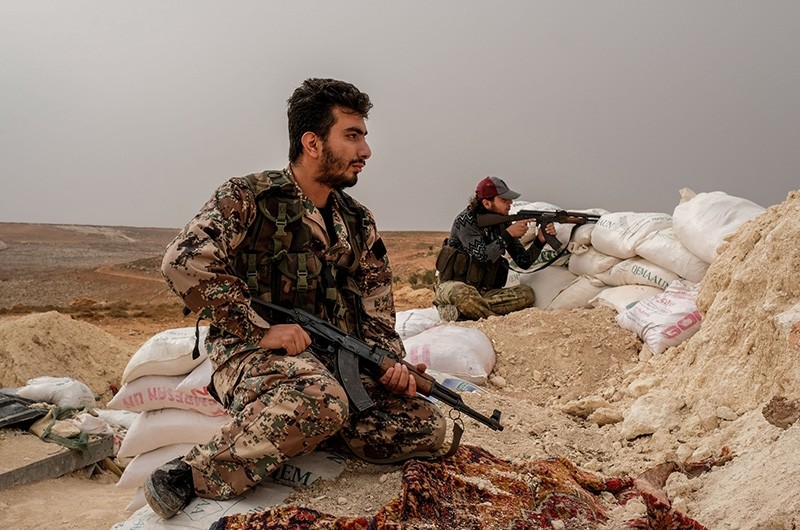 Local councils in Syria published a joint declaration on Friday, calling for a humanitarian corridor to be established amid escalating tensions and clashes in northern Syria between a faction of the National Liberation Front (NLF) backed by the Free Syrian Army (FSA) and the al-Qaida-linked Hayat Tahrir al-Sham (HTS) terrorist group.

The clashes started on Tuesday in Aleppo and intensified in the last two days, spreading to Idlib's north and southeast, including the western countryside of Aleppo province, Atmeh town, the tents area in northern Idlib and northwest Hama province.

The HTS launched an attack on Tuesday against towns in Aleppo's western countryside, which are held by the Nour al Din Zinki faction, a member of the NLF. According to the HTS, the attack was in retaliation for an alleged ambush that killed five HTS fighters.

The infighting intensified on Wednesday in the town of Darat Izza. Turkey has observation posts in areas close to this town.

At least 12 civilians have lost their lives so far and more than 40 others have been injured as clashes continue in towns on the western countryside of Aleppo and southeastern Idlib.

According to statements shared on social media, the roads reaching the western countryside of Aleppo were blocked. The roads are located in the de-escalation zone that was agreed by President Recep Tayyip Erdoğan and his Russian counterpart Vladimir Putin in Sochi. The statement said that the links between the villages and cities have been disrupted due to the clashes.

In a reaction to the ongoing fighting, many civilians in the town of Maarat al Numan, controlled by the NLF, held a rally against the HTS on Wednesday. The group stressed that the recent attacks by the HTS were serving the Bashar Assad regime.

Clashes between the sides raised concerns for civilians in case of a spillover of the attacks into urban areas.

As a result of the clashes, the NLF announced that it took control of the town of Salwa in the Idlib countryside after clashes with the HTS on Thursday.

Even though the HTS announced that it took control of areas in Idlib's south, including al Faqi, al Fattirah, Sfouhan, Ourembe and Tarmalah, the NLF said it had retaken control of Sfouhan and al Fattirah on Thursday. According to the Sochi deal, these areas in southern Idlib are included in regions that are expected to be cleared of heavy weaponry.

The HTS has also reportedly captured the villages of Bsartun, Habta, Sadiya, Fidre, Tikad, Kafr Naha and Daret Izze district on the western countryside of Aleppo and strategic mount Barakat.

Meanwhile, it was reported that the clashes extended to Atma, a town located on Idlib province's northern border with Turkey. Tens of thousands of Syrians have been living in camps in Atma, and the recent escalation of clashes poses threats to civilians living in the region. Reportedly, the clashing sides were using artillery around Atma and the Dir Balout internally displaced people's camps.

Erdoğan and Putin agreed on September 2018, following their talks in Sochi, to establish a demilitarized zone in Idlib, in order to decrease tension and prevent a new conflict in the province. The demilitarized zone was planned to be 15-20 kilometers deep in Idlib. According to the 10-article memorandum signed between Ankara and Moscow during the meeting, the Idlib de-escalation area will be preserved and Turkish observation posts will be fortified and continue to function. Russia will also take all necessary measures to ensure that military operations and attacks on Idlib are avoided and the existing status quo is maintained.

The agreement also envisaged the removal of "all radical terrorist groups" from the demilitarized zone by October 2019. Russia and the Assad regime had previously pushed the existence of HTS as justification for a possible offensive in the province.

HTS is the most powerful terrorist alliance in Idlib, the last major opposition-controlled enclave outside Bashar Assad's control.

After the fall of Aleppo in November 2016, dozens of opposition groups, including Ahrar al-Sham and the HTS squeezed into Idlib.