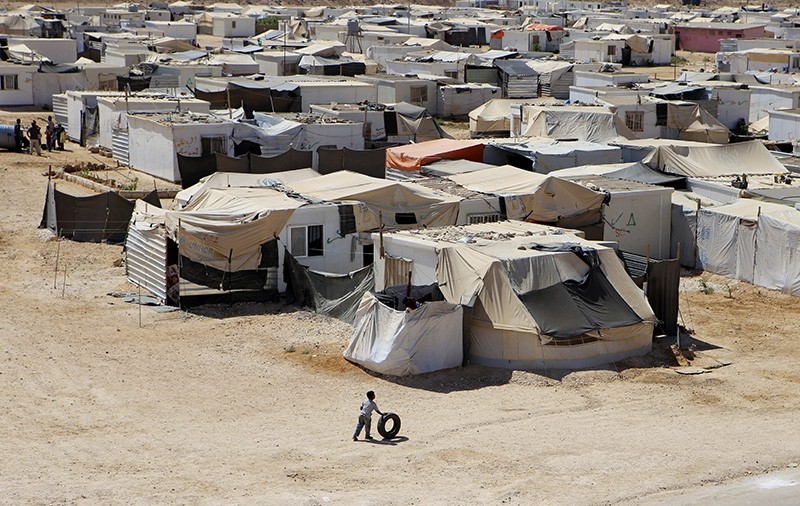 A Syrian refugee woman is in critical condition after setting herself on fire at a refugee camp near the Jordanian border due to lack of enough food.

Sundus Fathallah, 28, set herself and her three starving children on fire inside a tent at Rukban refugee camp near Syria's border with Jordan as she helplessly watched her children starving, according to a local medic and spokesman at the camp.

Other refugees at the camp put out the fire, which damaged the tent, and evacuated the woman and her children to the hospital, spokesman Khaled al-Ali told dpa.

The woman and her infant were seriously wounded, while the two other children suffered minor injuries, he added.

He said the woman has been transferred to Jordan for medical treatment.

Omar al-Homsi, a spokesman for the civil defense agency at the camp, said there were conflicting reports about the incident.

"Some suggest that she was injured in a fire at her tent, while others say she committed suicide," he said.

"Her brother in Syria's northern Idlib city confirmed that neither his sister nor nephews had anything to eat for the past two weeks."

Activists at the camp say that the refugee woman was a mother of three.

The woman's husband appeared in video footage saying that his wife had committed suicide due to poverty and hunger.

"Our information shows that the woman's family is very poor and they had nothing to eat for the past two weeks," al-Homsi said.

Nearly 60,000 refugees live under harsh conditions in Rukban, located in a remote area of the Syrian desert near the Jordanian border.

Most of the refugees there fled areas in eastern Syria that had once fallen to the Daesh terror group, and were trapped after Jordanian authorities closed the border.

Last year, at least 20 people died due to lack of medical services inside the camp.

In a statement issued late last year, the Syrian Network for Human Rights (SNHR) said the deaths of six refugees were the result of starvation, disease and lack of medicine.

It blamed the Assad regime for the humanitarian crisis in the desert camp and accused the Jordanian government of banning the entry of humanitarian aid into the camp.

The Syrian regime has imposed a tight siege around the camp, triggering deteriorating humanitarian conditions for its residents.

Syria has only just begun to emerge from a devastating conflict that began in 2011 when the Bashar Assad regime cracked down on demonstrators with unexpected ferocity.