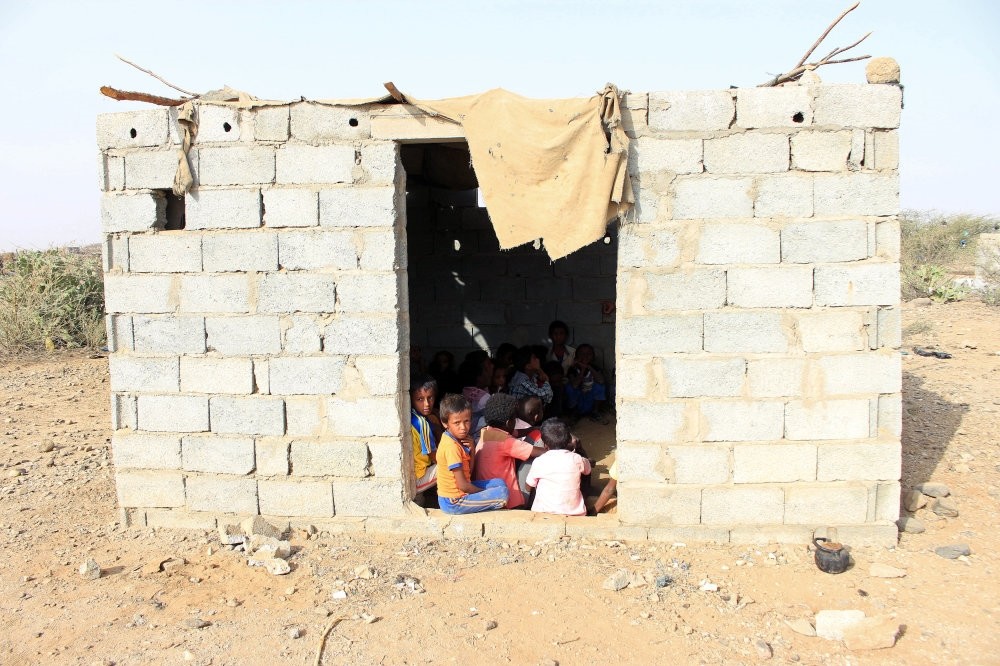 Students displaced from different cities in Yemen's northwestern province of Hajjah attend a class, Jan. 27, 2019.
by Compiled from Wire Services Feb 09, 2019 12:02 am

As part of fragile peace gains, Yemen's government and Houthi rebels agreed on a preliminary compromise for redeploying their forces from the port city of Hodeida

Yemen's warring parties have reached a preliminary compromise on how to implement a truce and troop withdrawal accord in the port of Hodeida, although the deal has not yet been finally agreed, the United Nations said on Thursday.

U.N. spokesman Stephane Dujarric said the agreement was reached by representatives of Yemen's government and Houthi Shiite rebels meeting on a U.N. vessel in Hodeida's inner harbor during U.N.-mediated talks between Feb. 3 and Feb. 6.

Following three rounds of talks aboard a U.N. ship in Hodeida's harbor, a proposal was put forward by Danish General Michael Lollesgaard, who heads a U.N. observer mission, "that proved acceptable, in principle," said Dujarric.

"A preliminary compromise was agreed, pending further consultation by the parties with their respective leaders," he added.

The two sides are to meet again next week to finalize details for the redeployment, if the compromise is endorsed by the Houthi and government leadership.

The cease-fire and the redeployment of forces agreed in Stockholm have been hailed as a major step toward ending Yemen's nearly four-year war that has left millions on the brink of famine. U.N. officials however have warned the peace gains are fragile.

Implementation of the deal, the first breakthrough in peace efforts in five years, has stalled as the sides disagree on who will control Hodeida after the withdrawal. Hodeida is of strategic importance because of its port, which is the entry point for some 80 percent of Yemen's imports and aid.

In June, a Saudi-led coalition supporting the Yemeni government began a major offensive to seize Hodeida, which has been under the control of rebels since October 2014, a month after the Houthis overran the capital Sanaa. While there was some progress on the pullback of forces, U.N. efforts to gain access to a food storage site in Hodeida that could feed millions of Yemenis hit a wall. U.N. aid chief Mark Lowcock urged the Houthis to allow relief groups to cross front lines "in the coming days" to reach the Red Sea Mills, which are located in a government-controlled area of Hodeida. Yemen lies beside the southern mouth of the Red Sea, one of the most important trade routes in the world for oil tankers. It has been wracked by conflict for the last five years when Shiite Houthi rebels overran much of the country.

Saudi Crown Prince Mohammed bin Salman, the former Saudi defense minister, and Saudi Arabia's allies launched Operation Decisive Storm in March 2015. Civilians have borne the brunt of the conflict. The last available U.N. figure for the civilian death toll was published in 2016 and stood at more than 10,000. The Armed Conflict Location & Event Data Project, which tracks violence in Yemen, puts it at around 57,000 people.