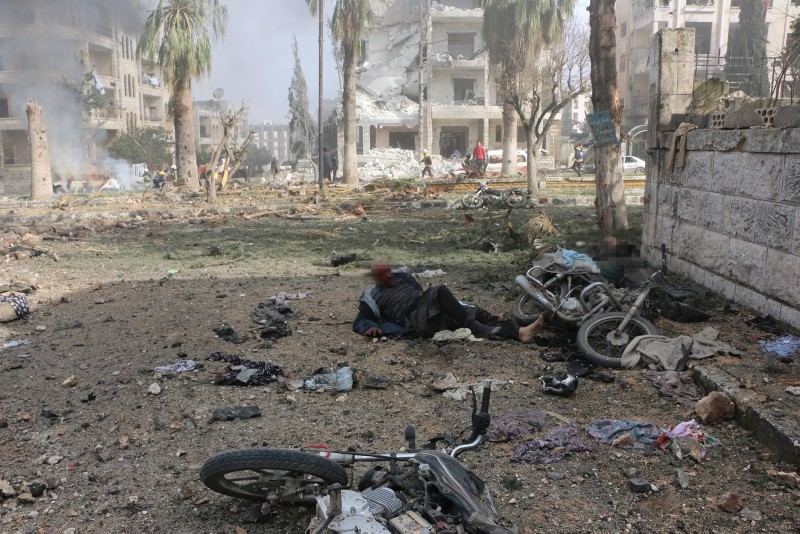 At least 24 people, including 16 civilians, were killed and more than 25 others were injured after two bomb-laden vehicles exploded on a busy street in Syria's northwestern Idlib city center during rush hour, reports said Monday.

Sixteen civilians, including four children, are among those killed, while the identities of four others remain unclear, said Rami Abdel Rahman, head of the Britain-based Syrian Observatory for Human Rights.

The first blast occurred in the early afternoon and another followed seconds later. While the first explosion did not cause major harm, the second one caused the death of a large number of people as well as other heavy damages. No group has claimed responsibility for the bombing as yet.

The opposition's Syrian Civil Defense, a group of volunteer first responders, said one of its members was wounded.

The Syrian Civil Defense group, which arrived at the scene of the incident as response units, noted that the second explosion resulted in numerous casualties as it took place near an area with many civilians.

The province of Idlib, which occupies most of the remaining area controlled by groups fighting against the Syrian regime, is largely controlled by al-Qaida-linked Hayat Tahrir al-Sham (HTS), which has wide influence in northern Syria. The region falls within the de-escalation zone agreed as part of the Sochi Agreement reached on Sept. 17 by President Recep Tayyip Erdoğan and his Russian counterpart Vladimir Putin.

According to the Sochi agreement, a cease-fire in the Idlib region will be preserved, with the withdrawal of heavy arms and radicals from the region. Prior to the agreement, the Assad regime was signaling a grand operation toward Idlib, sparking deep fears in the international community of a new humanitarian crisis.

The city has been hit with bombings in recent months that killed or wounded scores of people.

Alliance commanders say they hundreds of people have been rounded up for suspected links to Bashar al Assad's intelligence services or Daesh sleeper cells who they blame for some of the bombings.

They say the wave of blasts in the densely populated region, a haven for tens of thousands of civilians opposed to Assad's rule, aims to destabilize the last opposition bastion remaining after almost eight years of civil war.

Idlib, which borders Turkey, has also seen an escalation in artillery fire from the Syrian army and allied Iranian-backed militias on rebel-held towns, witnesses said.

Damascus has vowed to retake every last inch of Syria to cap a string of military gains in the last two years that have recovered almost all rebel-controlled regions with the key assistance of Russian air power. Russia is keen to help Assad regain the entire country, including eventually Idlib, but Tukey, which wants the Syrian leader to leave power, has so far successfully pushed back.

Last week President Vladimir Putin said Russia, Turkey and Iran had agreed to take unspecified extra steps to clear Idlib of what he called "a hotbed of terrorists," but the Kremlin said there would be no military operation there.

Yet the regime and its supporters have violated the agreement. Since the Sochi agreement in September, more than two dozen civilians have lost their lives in attacks by the regime with many injured.

Speaking on the issue last week, Erdoğan said that it is important to make a distinction between the moderate opposition and terrorist organizations within the province, emphasizing the delicacy of the situation. "Our intelligence agency is also working on the issue," Erdoğan said, adding that the Turkish military observation points in the region also have a key duty. "They will not give any chance to the terrorist organizations [to manipulate the situation in the region]," he said.