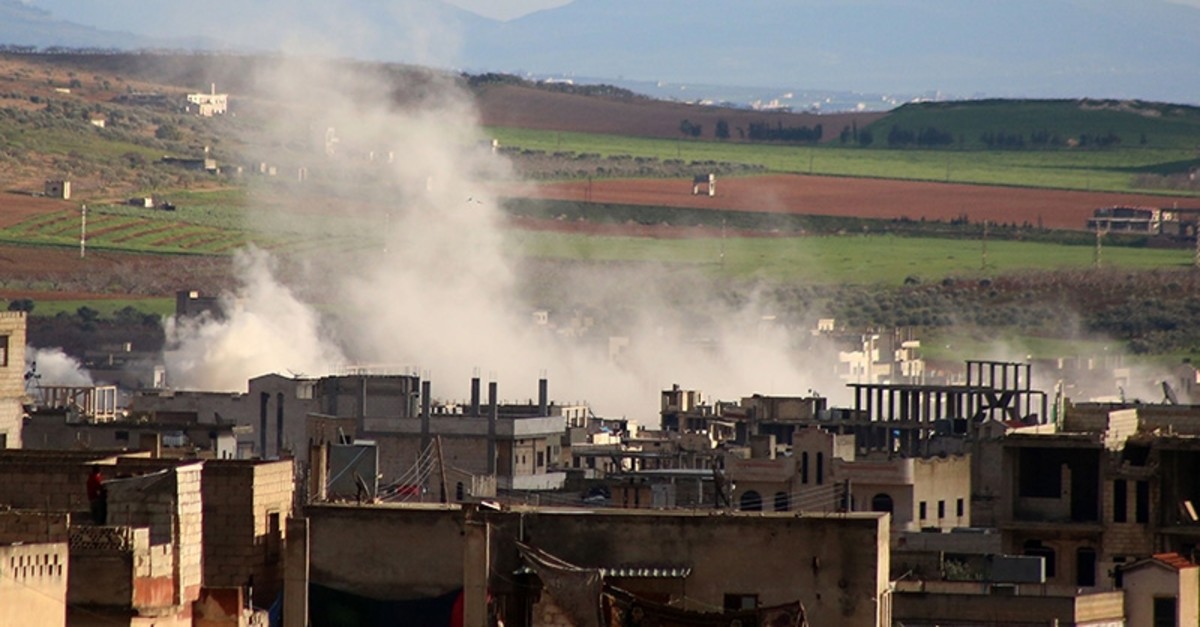 Smoke rises above building reported shelling in the town of Khan Sheikhun in the southern countryside of the opposition-held Idlib province, on Feb. 28, 2019. (AFP Photo)
by Anadolu Agency Feb 28, 2019 12:00 am

The Sochi agreement in which Turkey and Russia agreed to declare Syria's northwestern Idlib province a demilitarized zone led to a significant decrease in armed conflict in the region.

Located in northwestern Syria near the Turkish border, Idlib was designated last May as a de-escalation zone, where acts of aggression are expressly forbidden.

Attacks by pro-regime forces in Idlib and western Aleppo as well as those carried out by the Syrian Democratic Forces (SDF) -- a group is dominated by the PKK-affiliated People's Protection Units (YPG) -- and the international coalition in Deir el-Zour, continue with no measures taken to protect civilians.

Civilians in areas recently retaken by pro-regime forces, including in Eastern Ghouta and Daraa, similarly suffer from a general absence of the rule of law, according to the report.

Thousands of women, men and children continue to be unlawfully interned or detained with some of them held in deplorable conditions in makeshift camps unfit to meet their basic needs.

Regime forces detain civilians both as a method of retaliation and intelligence gathering.

After benefiting from sweeping offensives in the south, the regime and its allies turned their focus last August to Idlib -- the last remaining opposition stronghold.

Dozens of air raids were conducted across the governorate through August and September, decimating residential areas and targeting specially protected buildings including hospitals.

The report underlined that despite the creation of the demilitarized zone, numerous civilians, including women and children, were killed in areas that it encompassed.

The U.S. has supported the YPG under the name SDF, which is considered by Ankara as the Syrian offshoot of the PKK terror organization.

In its more than 30-year terror campaign against Turkey, the PKK -- listed as a terrorist organization by Turkey, the U.S. and the EU -- has been responsible for the deaths of some 40,000 people, including women and children. The YPG is its Syrian branch.

Ankara has long criticized the U.S. for working with the terrorist YPG to fight Daesh in Syria, saying that using one terror group to fight another makes no sense.

The report also drew attention to attacks by the SDF and the international coalition on Deir ez-Zor on the pretext of the fight against Daesh.

"Though SDF captured Hajin from ISIL [Daesh] by mid-December, the battles came at an extremely high cost to civilians. The Commission continues to investigate international coalition air strikes carried out between October and December that reportedly resulted in numerous civilian casualties. In areas adjacent to Hajin, clashes between SDF and international coalition forces against ISIL continue," the report added.

According to the report, some 41,000 Syrian women, men and children remain confined in makeshift camps in the southern desert near the Jordanian border.

The report stressed the exceptionally dire conditions in which the majority of encamped civilians subsist, with little to no access to basic services including medical care, education and basic sanitary services.

"Due to the absence of security guarantees from tribal community leaders and armed groups overseeing the camp, as well as the routine, arbitrary denial of consent for aid deliveries by Syrian authorities, humanitarian convoys have been repeatedly halted," it added.