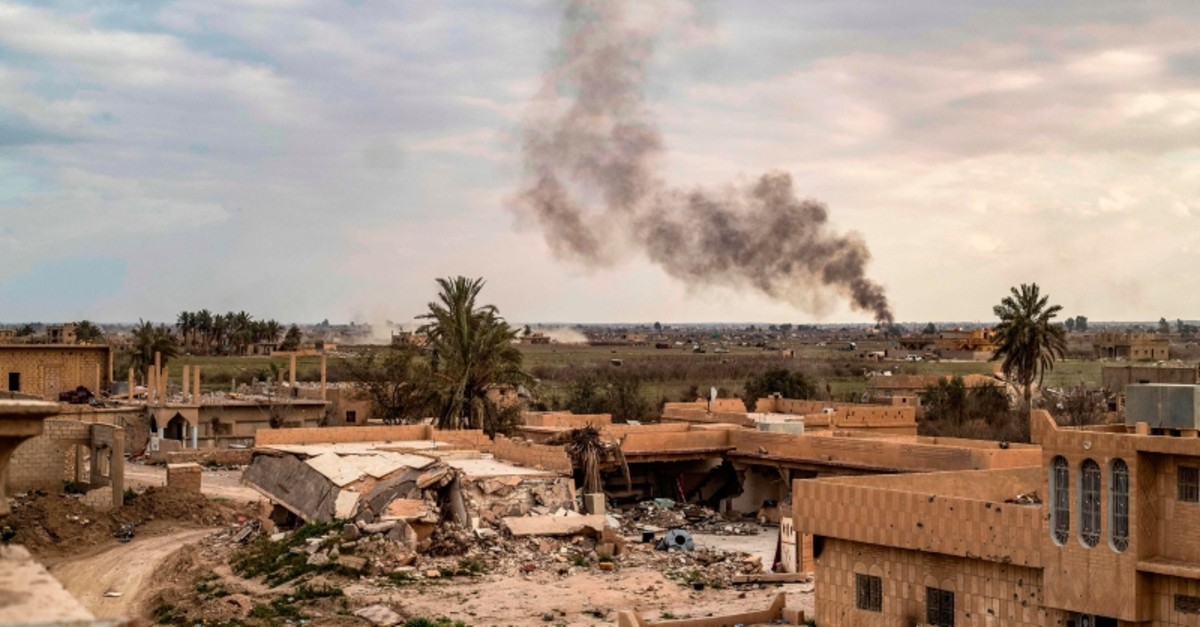 Smoke plumes billow from the remains of a Daesh terror group camp near the village of Baghouz in the eastern Syrian province of Deir el-Zour, on March 15, 2019. (AFP Photo)
by Daily Sabah with AFP Mar 17, 2019 12:00 am

Landmines left behind by Daesh terrorist have killed at least 17 people in Syria in a 24-hour period at the weekend, a war monitor said Sunday.

An ordnance left behind by the Daesh terror group exploded in the eastern province of Deir el-Zour on Saturday, killing 16 people and wounding 32 others, said the Syrian Observatory for Human Rights.

A separate landmine explosion in the northern province of Aleppo on Sunday killed one person, the Observatory said.

Demining former Daesh strongholds continues to be a major challenge in areas liberated from the terrorist group.

Last month, more than 20 civilians were killed in Hama province in central Syria when a landmine left behind by Daesh exploded under a van.

At least 44 people have been killed in landmine explosions across Syria in the past three weeks, the Observatory said.

More than four years after Daesh overran large parts of Syria and neighboring Iraq, the terrorist group has lost one territory after another and is left with only a tiny patch in the village of Baghouz near the Iraqi border.

The U.S.-backed Syrian Democratic Forces — largely made up of PKK terror group's Syrian affiliate the People's Protection Units (YPG) — is closing in on Daesh terrorists defending their last sliver of territory.

The battle for Baghouz is now the only live front in Syria's war, which has killed more than 370,000 people and displaced millions since 2011.

Beyond Baghouz, Daesh retains a presence in the vast Syrian desert, and continues to claim deadly attacks in SDF-held territory.

The United States has partnered with the SDF under the pretext of fighting Daesh in Syria. Turkey has long opposed the U.S.' partnership with the terrorist YPG and SDF, objecting that partnering with one terrorist group to defeat another will not achieve the desired goal.

The YPG is the Syrian affiliate of the PKK, which is listed as a terrorist group by Turkey, the U.S. and the EU. In its 30-year terrorist campaign, the PKK has taken some 40,000 lives, including women and children.