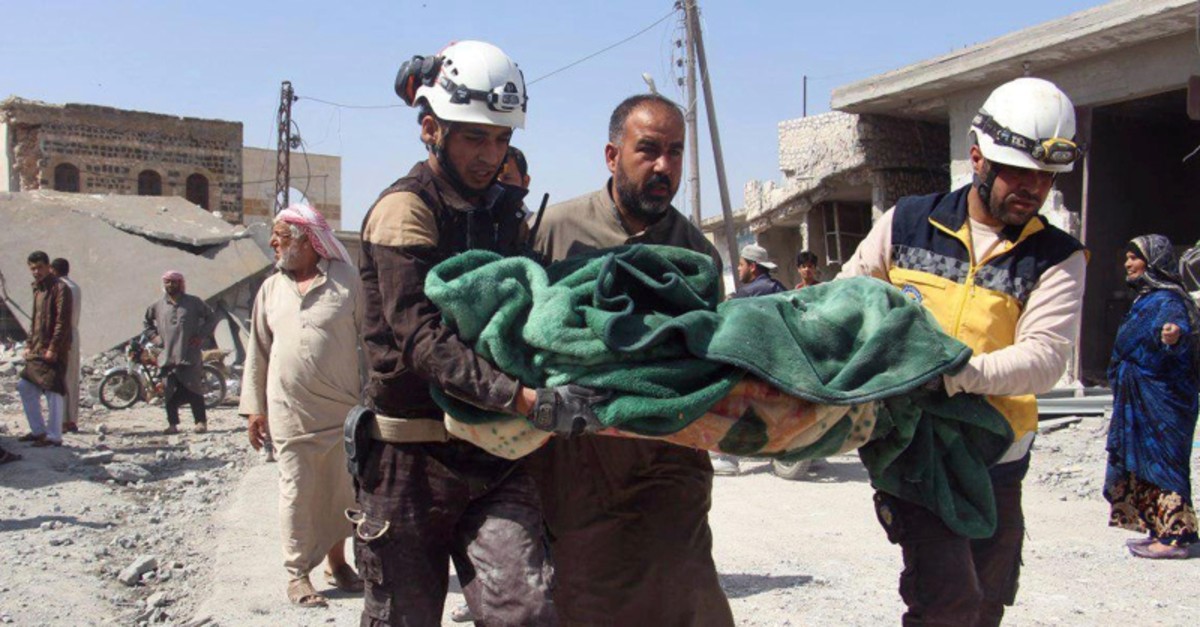 This photo provided by the Syrian Civil Defense group, shows workers carrying a victim after a deadly airstrike hit a market killing several people in the village of Ras el-Ain, in the northwestern province of Idlib, Syria, May 7, 2019. (AP Photo)
by Compiled from Wire Services May 07, 2019 2:43 pm

According to the same sources, the villages of Kafr Naha and Zahret al-Madina in Aleppo province were similarly targeted.

At least 53 regime and opposition fighters have been killed since Monday, in one of the deadliest flare-ups since a demilitarized zone around the Idlib region was agreed in September last year, the Britain-based Syrian Observatory for Human Rights said.

In its April report, the U.K.-based Syrian Network for Human Rights (SOHR) said 127 civilians had been killed by regime attacks, while another 13 were killed by Russian airstrikes.

Around seven health centers in Idlib and in the central province of Hama have been hit in the past 10 days, a U.N. spokesman said on Tuesday.

The Assad regime and its Russian allies unleashed a massive wave of airstrikes on opposition-held areas in the countrysides of Idlib and Hama last month, killing at least 69 civilians, including 11 children, according to the Britain-based Syrian Observatory for Human Rights.

"Since April 28, at least seven health facilities had been struck," David Swanson, public Information Officer at the Regional Office for the Syria Crisis, told dpa.

The Idlib Health Directorate also confirmed the number. The Observatory said four of the targeted hospitals are out of service.

The U.N. said that among the civilian infrastructures hit since April 30 were nine schools.

A statement by U.N. Secretary General Antonio Guterres late Monday expressed concern over aerial attacks targeting population centers and civilian infrastructure in Idlib and Hama, and said that over 150,000 people have been displaced so far.

"We are alarmed by ongoing reports of aerial attacks on population centres and civilian infrastructure, resulting in hundreds of civilians dead and injured," David Swanson of the U.N. Office for the Coordination of Humanitarian Affairs, or OCHA, said Tuesday.

"More than 152,000 women, children and men have been displaced in Aleppo and Idlib governorates over the past week alone," he told AFP.

The displaced people are so far settling in refugee camps in Atmeh, Deir Hassan and Kafr Lusin in the northern part of Idlib, near Turkey's border district of Reyhanlı.

"This is the third time we have been displaced but this time is the scariest," said Abu Ahmad, a 40-year-old from southern Idlib who was fleeing with his family towards areas near the border with Turkey on Tuesday.

"Overflights by warplanes and shelling have been relentless," said the father of three, his blue pick-up truck stacked with mattresses, bed sheets and household appliances.

Last September, Turkey and Russia agreed to turn Idlib into a de-escalation zone in which acts of aggression would be strictly prohibited. The buffer zone also includes parts of the neighboring provinces of Latakia, Hama and Aleppo.

The region of some 3 million people is under the control of a former al-Qaida affiliate Hayat Tahrir al-Sham (HTS) in one of the last parts of Syria that Bashar Assad has yet to take back.

Despite the deal, the Assad regime has been pushing to make new territorial gains. The pro-regime Al-Watan daily said the military had captured the villages of al-Janabara and Tel Othman, with opposition groups refuting the claims, saying they had repulsed government assaults. The Syrian Observatory for Human Rights said government troops had seized Tel Othman.

AA reported that the humanitarian group will serve meals to more than 7,000 civilians in Idlib on a daily basis and it will also deliver iftar to civilians at 15 orphanages and six camps, according to Red Crescent's Syria coordinator Fatih Kökcan.

"The displaced people who fled conflict zones and gathered near our border will also get the iftar meal," he said.

Kökcan and other officials from the Turkish Red Crescent also had their iftar meals at the Al-Ardiya orphanage.

Since the beginning of the civil war, Turkey's aid organizations have exerted efforts to provide humanitarian aid as well as supporting health and educational services for Syrians in the northern provinces of the war-torn country.

The civil war in Syria erupted in 2011 when the Assad regime harshly responded to protesters who had poured onto the streets to demand more rights and freedom. The cruelty against the protesters triggered a rebellion in significant parts of the country, turning into a brutal civil war. While more than 400,000 people have been killed, around 6 million people have been displaced internally and another 5 million were driven abroad as refugees since the beginning of the civil war, according to U.N. figures.