Turkey calls on Syrian regime, Russia to return to Astana deal in Idlib 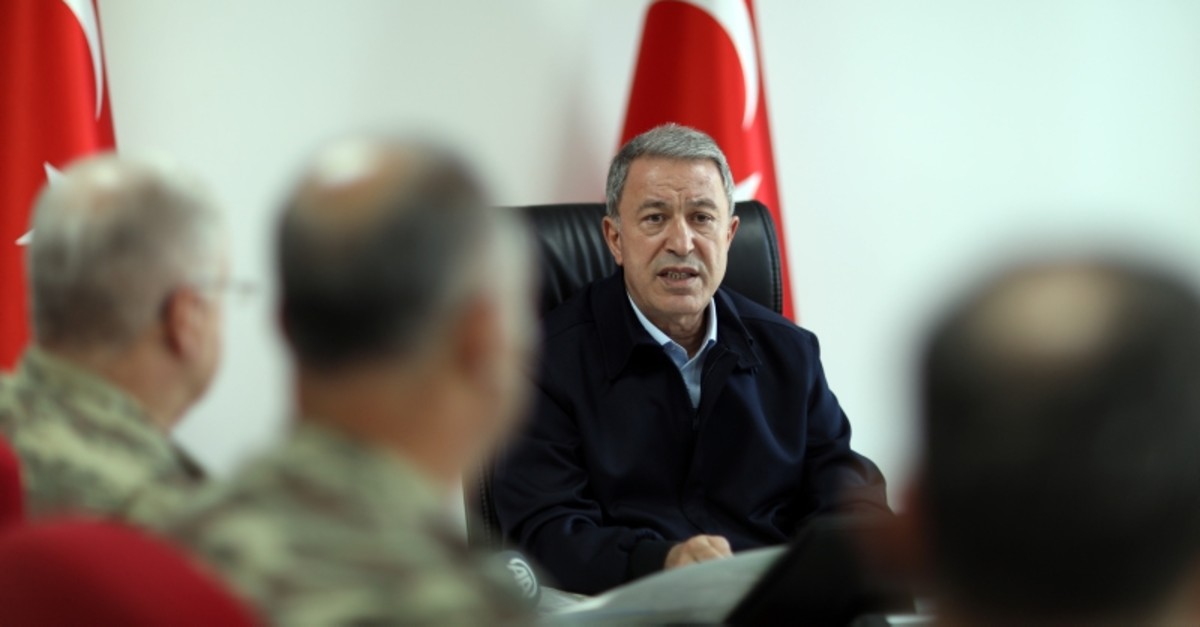 Defense Minister Hulusi Akar on Friday called on the Assad regime and Russia to abide by the borders of the de-escalation zone in northwestern Syria's Idlib agreed upon within the framework of the Astana process.

"The regime is trying to expand the control area to the south of Idlib, in contradiction with the Astana Accord," Akar said following the meeting.

Akar said the actions by the regime and its allies are increasing civilian casualties and displacement, exacerbating the humanitarian crisis day by day. The attacks also pose a risk to the security of Turkey's observation points in the region, he added.

"In this context, we expect the Russian Federation to take effective and decisive measures to stop attacks by regime forces in southern Idlib and to immediately withdraw from the Idlib borders determined in the Astana process and to prevent these violations and attacks in the subsequent period," he said, adding that Turkey continues efforts to maintain the cease-fire.

Turkey will continue to make every effort to protect the innocent civilians in Idlib, aware of its responsibility for peace and stability in the region, Akar said.

Attacks by the Assad regime and its ally Russia on opposition-held southern Idlib have has killed at least 114 people and forced more than 250,000 to flee in the past two weeks, the biggest escalation in the area since an agreement was signed between Turkey and Russia in September.

Previous Astana talks between Russia, Iran and Turkey had established four de-escalation zones in the northwestern province of Idlib, north of the central city of Homs, the Eastern Ghouta area outside Damascus and in the southern provinces of Deraa and Quneitra. The partial cease-fire, however, was short-lived as regime forces backed by Russia and Iran recaptured three of the areas through heavy bombardments, leaving Idlib as the last stronghold of the opposition. The Assad regime was signaling a grand offensive against Idlib, which was feared would cause a humanitarian catastrophe in the province that is home to about 3.5 million, many internally displaced, Syrians. However, Turkish and Russian intervention prevented the offensive.

On Sept. 17, 2018, both countries agreed in Sochi to implement a demilitarized zone between the opposition forces and the regime forces, warding off a possible humanitarian disaster. The Astana deal established a cease-fire on the condition that heavy arms and extremist groups withdraw from the region.

The Assad regime and its ally Russia have stepped up attacks on the enclave since January, when the former al-Qaida affiliate Hayat Tahrir al-Sham (HTS) took control of parts of Idlib. The HTS, which is also recognized as a terrorist group by Turkey, has tightened its grip recently against the Turkey-backed National Front of Liberation (NFL), which was formed as an umbrella organization last year by 11 opposition groups in Idlib.

Turkey has established about a dozen military positions in the area under its agreements with Russia that created a demilitarized zone from which militants were required to withdraw, effectively putting the onus on Turkey to tackle the problem while leaving the northwest within the sphere of Turkish influence.