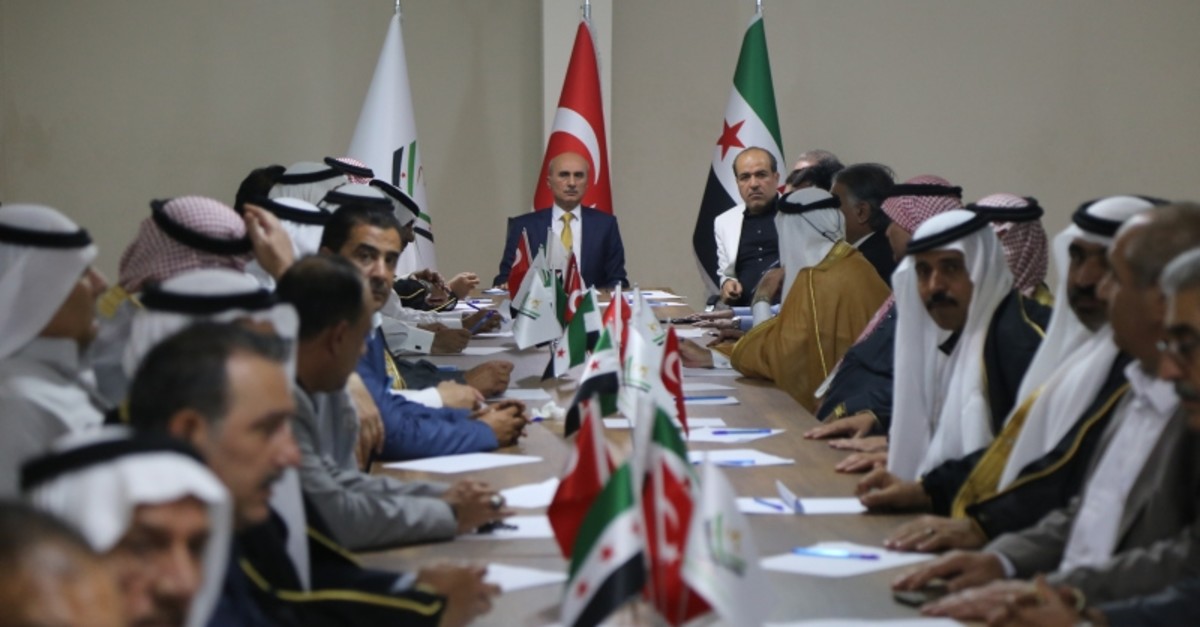 Syria's Turkmen, Arab, and Kurdish tribes are united against all terrorist groups and their activities, including the PKK terrorist group's Syrian affiliate the People's Protection Units (YPG), chairman of the Council for Syrian Tribes and Clans said Wednesday.

Speaking at the opening of the council's branch office in southeastern Turkey's Şanlıurfa province, Chairman Rami al-Saleh told reporters that they had opened the office in Şanlıurfa to show unity and solidarity as Syrians.

Over a hundred tribal and religious leaders from Turkmen, Arab and Kurdish communities joined the opening ceremony.

Saying that YPG terrorists have continued to kill people in places they have occupied in Syria, Saleh noted: "The terrorist organization is slaughtering our relatives. Most recently they killed nine people. We, as Syrian Arabs, Turks and Kurds are against the terrorist group, we do not accept them. We will not leave the territories they have occupied to them."

Saleh asserted that they will not accept even a single terrorist member in Syrian territory, and thanked Turkey for its support to eradicate these threats from the region.

Vice Chairman Muhammed Kayr Eyüp said they have been united against the terrorist organization to give them a message, adding that Turkey has been very supportive in this aspect.

He noted that they have also opened offices in Syria's Azaz, Turkey's southeastern Gaziantep province and are planning to open another office in Kilis province in southeastern Turkey as well.

Eyüp noted that there were Kurdish, Turkish, Arab, Christian, Yazidi and Alawite members in the council, and all were united for the same cause which is to not allow the terrorist group to even breathe in Syria.

After the ceremony, guests shared an iftar meal together.

The YPG has managed to occupy one-third of Syria under the guise of fighting against Daesh with U.S. support. As the Daesh terrorist group's influence in eastern Syria has waned, the YPG has prevented displaced Syrians from returning to their homes, drawing accusations that the group is trying to change the region's demographic composition.

In its 30-year terrorist campaign, the PKK, recognized as a terrorist group by the U.S., EU, and Turkey, has taken some 40,000 lives, including women and children. The YPG is the PKK's Syrian branch.

Turkey has promised a counterterrorism operation against the YPG in northern Syria, east of the Euphrates River.