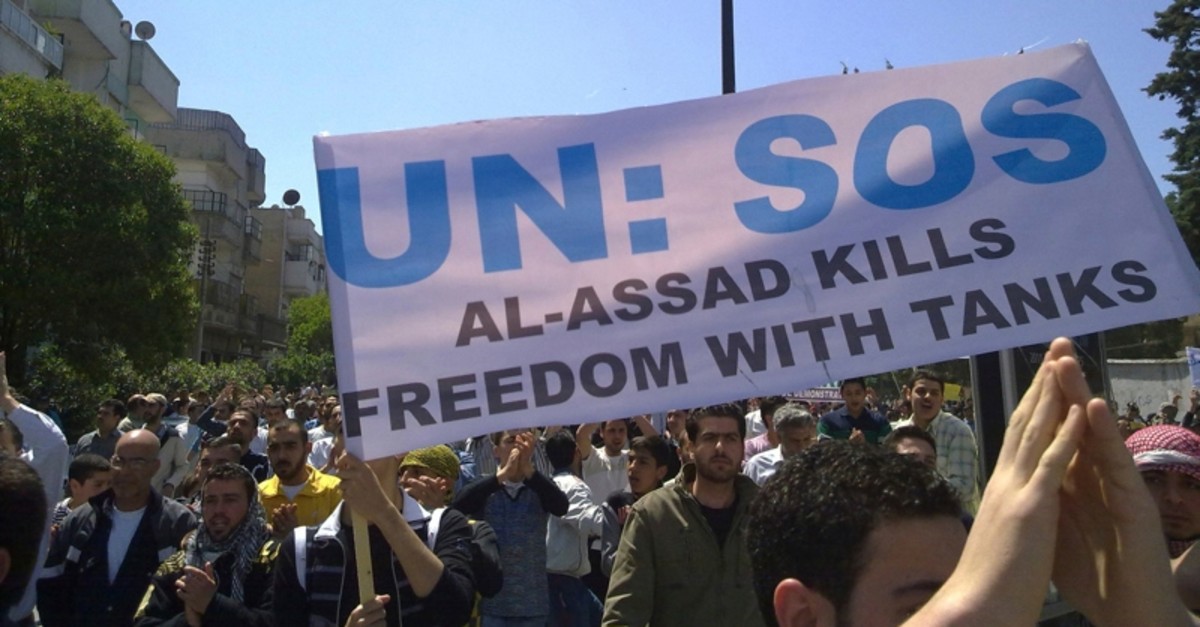 In this May 6, 2011, citizen journalism file image made on a mobile phone, Syrian anti-regime protesters carry a banner during a rally in the central city of Homs, Syria. (AP Photo)
by Daily Sabah with AFP May 21, 2019 3:59 pm

Damascus has carried out a wave of arbitrary arrests against former activists in opposition areas that surrendered under deals brokered by its ally Moscow, Human Rights Watch said Tuesday.

The so-called "reconciliation" agreements that restored regime control over swathes of central and southern Syria last year were heavily criticized from the start because they were signed under the pressure of military blockade and intense air and artillery bombardment.

The Bashar Assad regime offered amnesty to all who agreed to end their anti-regime activities.

But thousands of residents, particularly former fighters and their families, chose to be evacuated to remaining opposition-held territory rather than accept renewed rule by the Assad regime.

HRW said its research showed that former regime critics and opposition fighters who signed up for "reconciliation" had paid heavily for their decision.

It said it had documented 11 cases of arbitrary detention and disappearance in three areas retaken by regime forces last year — the southern province of Daraa, the Eastern Ghouta suburbs of Damascus, and southern neighborhoods of the capital.

Syrian organizations had documented at least 500 arrests in the three areas since August, it added.

"Active combat has ended in much of Syria, but nothing has changed in the way intelligence branches trample rights of perceived opponents of Assad's rule," said HRW's acting Middle East director, Lama Fakih.

"Lack of due process, arbitrary arrests, and harassment, even in so-called reconciled areas, speak louder than empty government promises of return, reform and reconciliation."

"In all cases, the people targeted... had signed reconciliation agreements with the government," it said.

It called on Moscow to use its influence with its ally Damascus "to stop arbitrary detention and harassment," and help "release arbitrarily held detainees."

According to opposition sources, Assad regime has thrown at least 500,000 people behind bars since the conflict began in 2011, and the detainees have been suffering in terrible conditions in the prisons.

Previously, the Conscience Movement, an international nongovernmental organization (NGO), called on the global community to take urgent action to secure the release of women and children languishing in Syrian prisons during an international conference in Istanbul.

At the conference, it was stated that more than 13,500 Syrian women have been jailed since the conflict began in March 2011, while more than 7,000 women still remain in detention where they are subject to torture, rape and sexual violence.

The United Nations on Tuesday said that, between July 26, 2018, and March 31, at least 380 people were arrested or detained in Daraa province alone.

At least 230 of these were subjected to enforced disappearances, while the rest were released after a few days in detention.

"Many families in Daraa continue to have limited or no information about their missing or detained relatives," said Marta Hurtado, spokeswoman for the U.N. High Commissioner for Human Rights.

Assad's forces secured full control of Daraa province from opposition forces in July, in a massive blow to the country's ill-fated revolt that erupted in the southern city.

As a guarantor of the Syrian regime, Russia is responsible for preventing attacks by regime forces and Iranian-backed militias, who repeatedly violated last year's Sochi agreement that aimed to establish a demilitarized zone in Idlib. However, the country constantly fails in this mission and causing the suffering of thousands of civilians in Idlib province as well.

Following eight months of calm provided by the Sochi deal, the regime has intensified their attacks since April 26 under the pretext of fighting Hayat Tahrir al-Sham (HTS) militants holed up inside Idlib. The intermittent attacks and bombardment have killed, wounded and displaced thousands of people. Residential areas have been destroyed by indiscriminate attacks, while numerous educational facilities, health facilities and residential areas collapsed or have become unusable after being targeted by bombs.