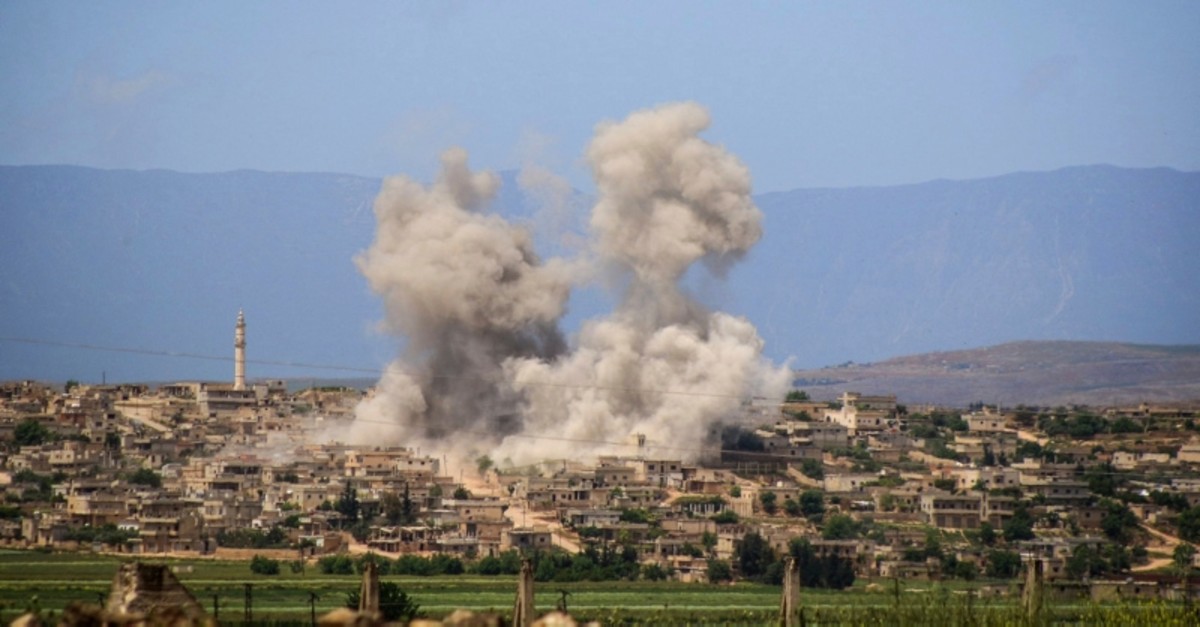 In this May 3, 2019 file photo, provided by the Syrian Civil Defense White Helmets, shows smoke rising after Assad regime and Russian airstrikes that hit the town of al-Habeet, southern Idlib, Syria. (AP Photo)
by Daily Sabah with Agencies May 22, 2019 12:56 am

The United States sees signs the Assad regime may be using chemical weapons, including a suspected chlorine attack on Sunday in northwest Syria, the State Department said on Tuesday, warning that Washington and its allies would respond "quickly and appropriately" if this were proven.

"Unfortunately, we continue to see signs that the Assad regime may be renewing its use of chemical weapons, including an alleged chlorine attack in northwest Syria on the morning of May 19," State Department spokeswoman Morgan Ortagus said in a statement.

"The United States continues to closely watch the military operations by the Assad regime in northwest Syria, including indications of any new use of chemical weapons by the regime," she added.

"We are still gathering information on this incident, but we repeat our warning that if the Assad regime uses chemical weapons, the United States and our allies will respond quickly and appropriately," she said.

Ortagus said the alleged attack was part of a violent campaign by Bashar al-Assad's forces violating a ceasefire that has protected several million civilians in the greater Idlib area.

"The regime's attacks against the communities of northwest Syria must end," the statement said. "The United States reiterates its warning, first issued by President Trump in September 2018, that an attack against the Idlib de-escalation zone would be a reckless escalation that threatens to destabilize the region."

President Donald Trump's administration has twice bombed Syria over Assad's use of chemical weapons, in April 2017 and April 2018. In September, a senior U.S. official said there was evidence showing chemical weapons were being prepared by regime forces in Idlib, the last major opposition stronghold in the country.

The State Department statement accused Russia and Assad's forces of "a continuing disinformation campaign ... to create the false narrative that others are to blame for chemical weapons attacks."

The U.S. also pushed back against Russian allegations against the civil defense agency, the White Helmets, that accuses Moscow of helping run a disinformation campaign to blame others for the chemical weapons attacks in Syria.

"At times, Russia and the Assad regime have made these false allegations as a pretext in advance of the Assad regime's own barbaric chemical weapons attacks," Ortagus said.

"The facts, however, are clear," the statement said. The Assad regime itself has conducted almost all verified chemical weapons attacks that have taken place in Syria — a conclusion the United Nations has reached over and over again."

Ortagus' statement comes as the regime mounts a new offensive in northwestern Syria, which the U.S. warned would be a "reckless escalation" that could destabilize the region.

The move threatens to unleash a major humanitarian catastrophe with 180,000 civilians forced to flee in the last three weeks, according to the U.N.

The U.N.'s emergency relief coordinator, Mark Lowcock, also said that a full military offensive by the regime could result in the worst humanitarian catastrophe of the 21st century.

The Sochi agreement was reached on Sept. 17, 2018 by President Erdoğan and Putin. According to the agreement the cease-fire in the Idlib region will be preserved, with the withdrawal of heavy arms and radicals from the region.

Following eight months of calm provided by the Sochi deal, the regime has intensified their attacks since April 26 under the pretext of fighting the Hayat Tahrir al-Sham (HTS) militants holed up inside Idlib.

The intermittent attacks and bombardment have killed, wounded and displaced thousands of people. Residential areas have been destroyed by indiscriminate attacks while numerous educational facilities, health facilities and residential areas collapsed or have become unusable after being targeted by bombs.