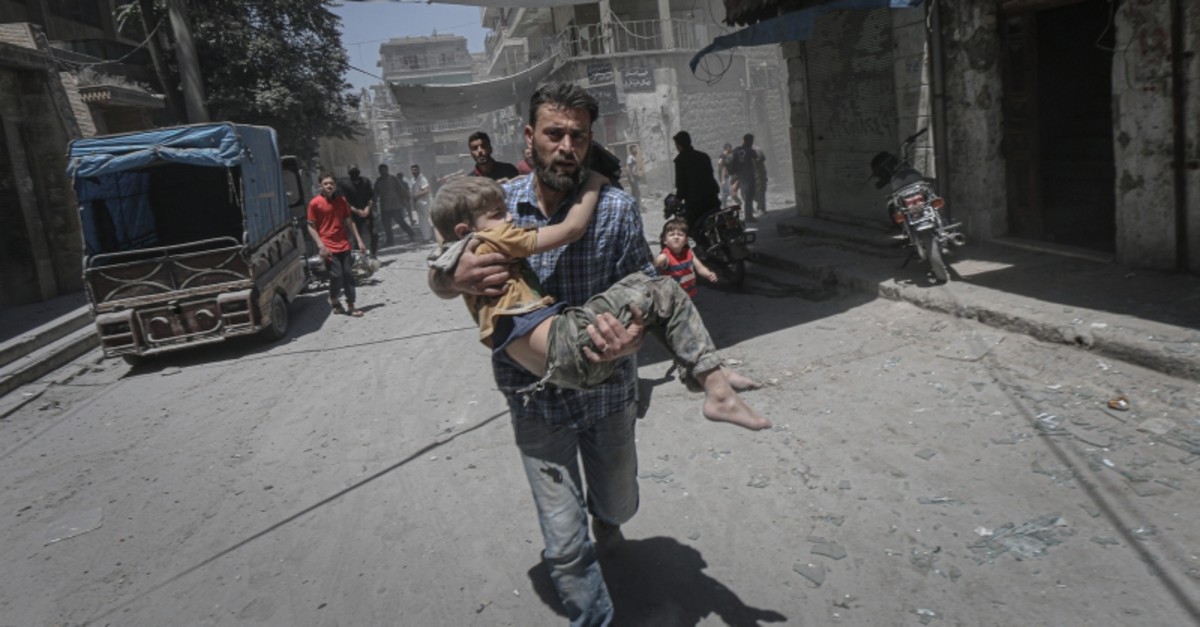 At least 21 civilians were killed on Tuesday as Assad regime intensified its bombardment of the last opposition stronghold in the country's northwest Idlib, a monitor said.

Nine children were among the 21 killed in regime fire on several towns in Idlib province and the countryside of neighboring Aleppo, said the Syrian Observatory for Human Rights.

Strikes on a busy street in the village of Kafr Halab, on the western edge of Aleppo province, killed at least nine civilians.

An AFP photographer said the bodies of the victims were torn apart and several stores lining the side of the road were destroyed.

The street was crowded with people out and about before breaking the daytime fast observed by Muslims during the holy month of Ramadan.

A hospital in the Idlib town of Kafranbel was also hit by artillery shells, said David Swanson, a spokesman for the U.N. humanitarian office.

"The facility is reportedly out of service due to severe structural damage," he told AFP.

"The hospital is completely out of service," he said.

"It was a strong attack. The generators and even my car caught fire," he told AFP.

It follows two days of intensified regime bombardment on the region that killed a total of 31 civilians on Sunday and Monday, according to the Britain-based Observatory.

Rescue volunteers and civilians were seen pulling dust-covered victims from the rubble of destroyed buildings in the wake of those strikes.

U.S. State Department said it was alarmed by the rate of attacks by Assad regime and its Russian ally on Idlib.

"Indiscriminate attacks on civilians and public infrastructure such as schools, markets and hospitals is a reckless escalation of the conflict and is unacceptable," said State Department spokeswoman Morgan Ortagus.

The U.N. deputy humanitarian chief warned that further military operations in northwest Syria's Idlib province will overwhelm aid efforts, stressing that an estimated 3 million people are caught up in crossfire in the last opposition stronghold.

Assistant Secretary-General Ursula Mueller told the Security Council that humanitarian operations in many areas where there are active hostilities have been suspended, explaining that many of the U.N.'s humanitarian partners have been displaced.

This means the suspension of health, nutrition and protection services previously supporting some 600,000 people, including 21 immunization centers that have ceased operations, Mueller said. It also includes at least 49 health facilities that have suspended or partially suspended activities for security reasons, she said.

Idlib is the Syrian opposition's last enclave and has been protected from a massive regime offensive by the deal reached between Ankara and Moscow in September 2018.

Its pre-war population of 1.5 million has swelled to around 3 million with new refugee waves after it was designated a "de-escalation zone" under the Astana agreement between Turkey, Russia and Iran in May 2017 to pave the way for a permanent political solution in Syria. Tens of thousands of Syrians trapped in other parts of the country were evacuated there under various cease-fire agreements.

The bombardments has killed 229 civilians, injured 727 and forced more than 300,000 people to flee since April 28, according to the Union of Medical Care and Relief Organizations (UOSSM), which provides assistance to health facilities.

While heavy airstrikes have worsened the humanitarian situation, Assad regime troops and opposition forces have been struggling for territorial gains in Idlib.

After the attacks escalated, the inhabitants of the city began to flock to territories liberated by Turkey with operations Olive Branch and Euphrates Shield, including cities near the Turkish border including Atme, Kah, Deir Hassan and Kefer Lusin and 12 observation points set up in the region by the Turkish Armed Forces (TSK) in May 2018.